Startup Quantum Motion is joining the silicon spin qubit gang with its own technology that can fit thousands of quantum dots onto a single silicon chip fabricated in a commercial semiconductor foundry. The move marks another small step along the road to building full-scale fault-tolerant quantum systems.

The company, led by academics from UCL and Oxford University, claims it has achieved a significant milestone in measuring the state of the quantum devices on one of its chips, saying it has demonstrated that 1,024 quantum dots covering an area of less than 0.1mm2 can be measured within 12 minutes.

Quantum Motion said its results were disclosed at the recent IEEE International Conference on Electronic Circuits and Systems held in Glasgow, UK.

Its latest chip, called Bloomsbury, is a 3x3mm2 device that has been made at a "tier one foundry" using the same mass production processes used in standard semiconductor manufacturing. Bloomsbury – named for the part of London where the company first set up shop – contains thousands of quantum dots into which individual electrons can be loaded to serve as qubits. 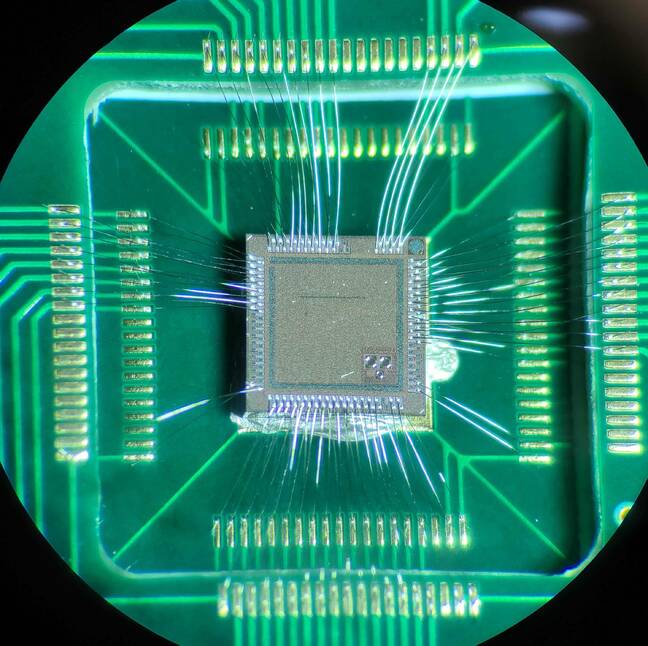 Going from today's small quantum processor demonstrations to large-scale quantum computers requires overcoming several challenges, according to Quantum Motion. One of these is simply bringing together enough qubits, and being able to mass produce quantum devices using existing chip manufacturing techniques is one answer to this.

Another is how to address each individual qubit in a large array without needing a vast number of connections going to the quantum device, the company said. Achieving this means not only manufacturing quantum devices with the same processes used to make conventional electronics, but also designing the electronic control circuitry so that it can function at the frigid temperatures required for qubit operation.

"Integrating these [quantum dots] on-chip with conventional electronics, which we designed to work at deep cryogenic temperatures, allowed us to read out thousands of quantum devices with only nine wires coming into the fridge. It has removed a major bottleneck to scaling," said Quantum Motion Integrated Circuit lead Alberto Gomez Saiz.

Yonatan Cohen, co-founder and CTO of Quantum Machines, agreed this is another advantage to using silicon to build quantum systems.

"In addition to the fact that you can scale up the number of qubits on a silicon chip, you can also think about integrating some of what we call the control electronics, the circuitry that is communicating with the quantum bits. Basically, you can integrate some of these elements into the same chip," Cohen told us.

Quantum Machines is not aiming to build quantum processors itself, but focuses on the hardware and software infrastructure required to operate quantum systems.

Cohen said this demonstration from Quantum Motion is an important step on the journey towards full-scale quantum computers.

"I think it's important work. As you know, there is tons of work to do to reach a full-scale quantum computer. But I think it's a very important milestone and showing that we're heading in a good direction towards there."

Quantum Motion said its chips were fabricated at an unidentified commercial foundry, using 300mm wafer production processes that are used for high yield and high volume chip manufacture. In this respect, the company is following a similar path to Intel, which announced earlier this month the latest results from its own experiments in manufacturing spin qubit devices using 300mm wafers.

Co-CTO John Morton hailed it as the result of a major interdisciplinary effort by Quantum Motion's semiconductor engineers and quantum physicists, and said that it shows the potential of realizing quantum processors by using advanced silicon foundry processes to mass produce quantum chips.

But the industry is still some way off from seeing general-purpose quantum systems capable of meeting the promises that have been made for the technology, as Cohen told us.

Before that, there are heuristic algorithms that could potentially give significant advantage for quantum computers within the next five to seven years, Cohen claimed, but we won't know until it they are tried. He likened the situation to machine learning, which was unproven technology until people built neural networks and found they were useful for particular applications.

"So people are building those machines to try them out and see if these algorithms work," Cohen said, adding that even if you want a general-purpose quantum computer in future, there is a lot of work that needs to be done, and you need to start doing it today. ®