AWS warned for burning customers, Azure for 'punitive' licensing, while Google's losses are a worry

Analyst outfit Gartner has published its annual Magic Quadrant assessing the world's leading Cloud Infrastructure and Platform Services providers, and in 2022 Oracle and Huawei were the big movers.

Amazon Web Services, Microsoft Azure, and Google Cloud retain their places as the only three clouds in the prized Leaders box of the conjured quadrilateral.

But Oracle jumped from the Niche box to become a Visionary, and Huawei debuted as a Niche player.

The contentious Chinese company made its appearance despite Gartner's worries that international sanctions have hurt its business, its PaaS products are paltry, and its partner ecosystem poor. On the upside, Huawei Cloud is very strong in China, and increasingly so in Latin America, Southeast Asia and Africa. Huawei also has the advantage of substantial on-prem and cloud experience. The company's many telco customers also give it an appreciation of what it takes to work with demanding clients. 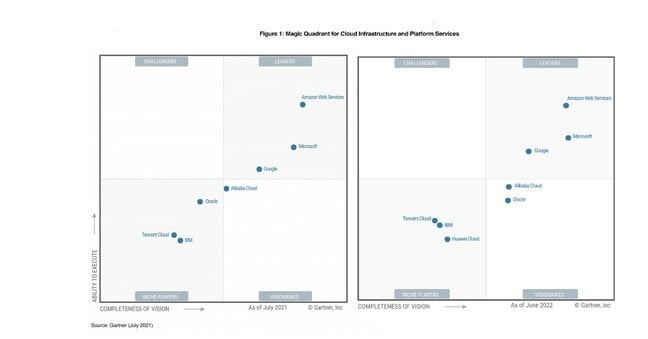 Oracle's jump came after Gartner's analysts decided the company "is out-innovating the market with respect to emerging enterprise needs such as sovereign clouds" and therefore is "particularly valuable to customers in countries with stringent regulatory and data privacy requirements as mandated by law."

"Oracle continues an impressive year-over-year pace of feature velocity that brings it closer to the market leaders in terms of hyperscale cloud capabilities. If the pace continues, Oracle will meet or exceed some of the providers in the Leaders quadrant in terms of capabilities within the foreseeable future," the document adds.

But Gartner also knows that plenty of customers have developed an intense dislike for Oracle, and rates that as a weakness.

"Oracle has negative brand association for many organizations, which was caused by years of tough compliance enforcement and inconsistent sales and support," the Magic Quadrant states. "As a result, many enterprises resist the thought of using Oracle technologies any more than is absolutely necessary."

A poor partner ecosystem and lack of interest in non-Oracle workloads are also cited as weaknesses.

Up in the Leader quadrant, AWS remains on top by dint of its market share, breadth of functionality, and ecosystem.

But Gartner warns the cloud colossus is burning some customers.

"AWS often optimizes for the short term when dealing with customers, particularly at the time of contract renewal, resulting in eroding customer relationships," the document states. "This, along with executive management changes, changing customer priorities, provider preferences in various regions and well-heeled competition, paint a challenging picture for AWS ahead."

Reliance on the us-east-1 region for operational and customer systems is cited as a weakness that hampers AWS's ability to handle crises, and a weak multicloud and sovereign cloud strategy also come in for criticism.

Microsoft is applauded for strong market share, availability of industry solutions, and hybrid and multicloud offerings.

"Microsoft is using licensing for its products, such as Windows and SQL Server, punitively against competitive cloud providers by making it more expensive to deploy Windows workloads anywhere other than Azure," the Quadrant states. Azure also comes in for criticism for opaque costs, and for struggling to innovate as it addresses security and resilience issues.

Google won praise for growing revenue, but earned a warning for still making losses. The ads and search giant was also criticized for hiking prices after using discounts to win customers.

Alibaba Cloud was rated highly for adoption in what Gartner called "China and the broader Sinosphere" – markets where the analyst thinks the cloud should be considered. Gartner praised Alibaba Cloud's partnerships with important software vendors like SAP, Salesforce, IBM and VMWare, but warned it is "not as consistent, transparent or predictable with respect to discounting and pricing relative to international competitors."

Gartner has sometimes lashed IBM's cloud as unreliable and immature. The Big Blue Cloud was this year praised for focusing on regulated industries, modernizing workloads that run on its proprietary hardware, and the strength of Red Hat's OpenShift container-wrangling range.

But Gartner worries IBM may not have put reliability issues behind it, has not developed solid sovereign cloud capabilities, and is yet to find a niche to own.

"IBM Cloud has not yet found its competitive identity when compared with other providers in the market," the document states, because it is yet to integrate its legacy products with Red Hat's into a hybrid and multicloud offering.

Tencent Cloud also earned a place on the Quadrant, albeit in the same Niche Player spot it occupied last year.

Gartner thinks it belongs there because it offers strong tools for companies that want to address China's consumer market and offers "rapid decision making on exceptions and discounts for larger customers."

But Gartner worries that Tencent is no longer interested in providing general purpose workloads – as the Chinese firm has often stated on earnings calls. The Chinese cloud was also criticized for slow pace of innovation. ®