Linux Lite 6.2 is the latest version of this increasingly inaccurately named distro. In effect, it's a niftily customized remix of Xubuntu 22.04.1.

This release is mostly comprised of UI adjustments, up to date software and bug fixes. This release improves upon 6.0 with numerous UI enhancements, updates to many Linux Lite applications, the newest stable LibreOffice, Lite Upgrade has a new end dialogue, there's a new Video Editor in Lite Software and much more.

Although a link to the announcement is right on the distro's homepage, the announcement itself is somewhat buried, eight posts down in a forum post in a thread asking for help on an installation error… and in testing, we immediately got the same error.

Somehow, here at The Reg FOSS desk, we feel that this reflects the slightly confused (or confusing) identity of this distro. Despite the name, this is not a lightweight distro. As we said when looking at version 6.0, it won't even try to install on the same spec of VM that we used when testing the official Ubuntu remixes in August. It would fit into 12GB – a full installation takes 9.5GB, including 1.7GB of swap file – but the installer balks at anything less than 16GB. 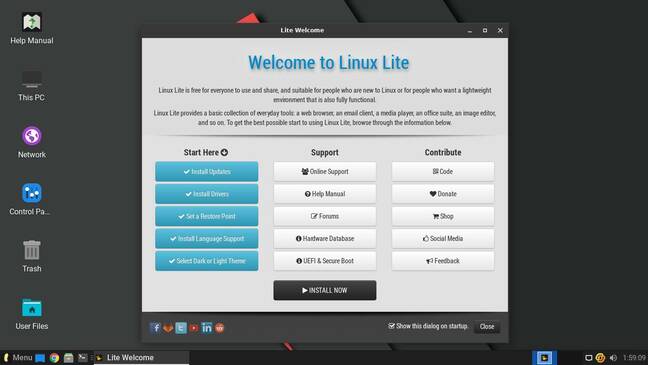 Linux Lite 6.2's Welcome screen offers to install the OS, even if it's already installed

There are other confusing aspects. The welcome screen at startup is a good thing, but it really should detect and reflect whether it's running from the live installation medium or an installed system – but it doesn't. So it offers to install updates on a live system, which won't work. Then, when installed, it still has the INSTALL NOW button front and center, which, again, won't work. If you work through the buttons, under the Upgrading heading, there's a big blue button labelled Upgrade to 6.2 – even on a newly installed 6.2 system.

For a distro that bills itself as "Your first simple, fast and free stop in the world of Linux," we feel that this kind of thing is confusing and unhelpful.

These aren't deal-breakers, though. There's a lot to like here. It has Google Chrome in place of Firefox, which is probably more helpful to more people. Neither Snap nor Flatpak are preinstalled. The desktop is Xfce, with a custom theme called Materia, and the powerline custom shell prompt.

There is an interesting selection of programs and accessories, with over 50 entries on the Settings menu, including over a dozen custom Linux Lite tools. This reflects better-than-average customizability; as an example, we like the HiDPI tool, which reports the display's current dots-per-inch setting, then offers a choice of scaling factors: 100, 125, 150, 175 and 200 percent. We also liked the System Monitoring Center task manager, and the "Lite widget," a neatly configured Conky. The Lite Software tool offers 37 handy additions, some proprietary freeware, such as Skype, Spotify and Steam.

Linux Lite resembles the Xfce version of Linux Mint in some ways, and we feel that there's enough overlap between the projects that they could work together and both benefit. It's a solid distro, except for a misleading name and a few niggles. Otherwise it's a decent option, especially for new Windows migrants. ®

Torrenting is still a thing, it still works, and if streaming vendors get mean, it's still an option
Applications8 Feb 2023 | 21