Think I got some dust in my eye

The Mars InSight lander is preparing to drift off to an eternal slumber beneath a blanket of solar-panel-obscuring Martian dust, as its power is set to run out within the next few weeks.

NASA announced the stationary Martian science lab's unfortunate end on Tuesday, saying dust storms that have gradually covered the craft's solar panels over its three years on the Martian surface, capped off by a dusting earlier this year that left the spacecraft with little power to carry out its objectives.

InSight, short for Interior Exploration using Seismic Investigations, Geodesy and Heat Transportation, landed on Mars in November 2018 on a mission to study the Red Planet's subsurface soil and seismic activity. InSight has nearly doubled its original mission duration of 728 days, and in that time has recorded over 1,300 Marsquakes, NASA said. 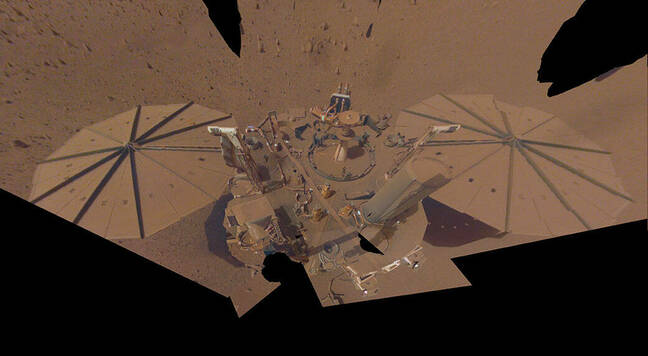 A dust-covered selfie from the Mars InSight lander, taken April 24

Insight is now down to a single tool – its seismometer – which InSight mission science and instrument operations leader at NASA's Jet Propulsion Laboratory Liz Barrett said the team is still gathering data from.

"We're pushing it to the very end," Barrett said. "There will be no heroic measures to re-establish contact with InSight. "While a mission-saving event – a strong gust of wind, say, that cleans the panels off – isn't out of the question, it is considered unlikely."

InSight may have encountered its share of problems during its mission, but has still gathered digital tons of Martian dirt data since 2018.

One such piece of info that's already been analyzed was the recently reported Christmas Eve 2021 Marsquake that was determined to actually be the result of a meteoroid impact with the red planet. To reach that conclusion, NASA paired recordings from InSight with observations made by the Mars Reconnaissance Orbiter that detected a previously unseen, and likely new, crater.

Aside from that discovery, countless details remain to be filed away and made accessible to researchers from around the world about things like Mars' interior layers, its core and subterranean remnants of the Red Planet's once much larger magnetic field, NASA said.

JPL's Sue Smrekar, InSight's deputy principal investigator, said that InSight's data will be made available to researchers through NASA's Planetary Data System and stored in an archive operated by the Incorporated Research Institutions for Seismology - the first such non-Earth data to be filed with the group. 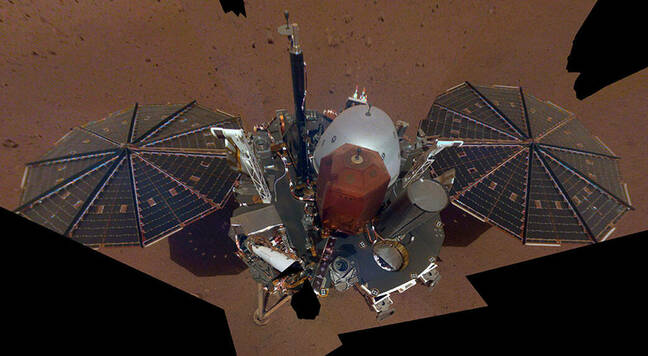 The InSight lander shortly after arriving on Mars, taken on December 6, 2018

Once InSight misses two consecutive check-ins with orbiting Mars Relay Network satellites the mission will be declared over, handing the task of monitoring for signs of life from InSight off to NASA's Deep Space Network, which will keep listening for a while just in case the lander is revived.

While it may not be the best time to mention it, what with InSight's impending death, it's worth pointing out that solar-power may simply not be the best choice for a long-term space mission, and there's ready evidence for that conclusion.

Dust doesn't melt, meaning it's up to a chance breeze to bring a lander back to life. Additionally, the Sun's strength on Mars is only about 44 percent as strong as it is on Earth, meaning there's a lot less solar energy getting to panels even when they're clean.

And while InSight still exceeded its planned duration (which are always conservative estimates), it's still nothing compared to the duration of the nuclear-powered Curiosity rover mission, which NASA planned to operate for two years when it landed on the Red Planet in 2012. NASA quickly extended Curiosity's mission duration to "indefinite," and believes it may have 55 years of energy at its disposal.

Think you'll see a solar panel on that rover? Nope - it's operating entirely on electricity generated by the radioactive decay of a 10.6 lb (4.8kg) chunk of plutonium dioxide.

NASA has used similar power systems for other craft, like the Apollo Moon missions, the Viking Mars missions and others, and said that the system is safe enough to not be a health hazard "unless broken into very fine pieces or vaporized and then inhaled or swallowed." Even then, the expected radiation dose would be negligible, NASA said.

Expect that dose to be even lower by the time a human astronaut could take a trip out to visit Curiosity, which could easily still be wheeling about if humans make it to the red planet in the 2030s.

A visit to solar-powered InSight, on the other hand, would be a memorial trip to talk about what could have gone differently if only the lander was equipped with a more reliable power source. ®