Pining for Windows XP? Update to the last major release can do that

Zorin OS 16.2 is a friendlier and more feature-rich distro than its parent Ubuntu 20.04, with a lot of updates and bundled apps.

The Reg looked at Zorin OS 16 when it came out in 2021. Like the 16.1 release in March, the new version is an update of that same version, so it's still based on Ubuntu 20.04 – albeit with the newer kernel 5.15 installed. This is a little surprising seven months after the release of the subsequent Ubuntu LTS release, but then again, to quote Bert Lance: "If it ain't broke, don't fix it."

There are six different editions of Zorin OS in this version and three product families: the paid Pro version, plus free Education and Core product lines. Each has a matching Lite variant, which replaces the GNOME desktop with Xfce. 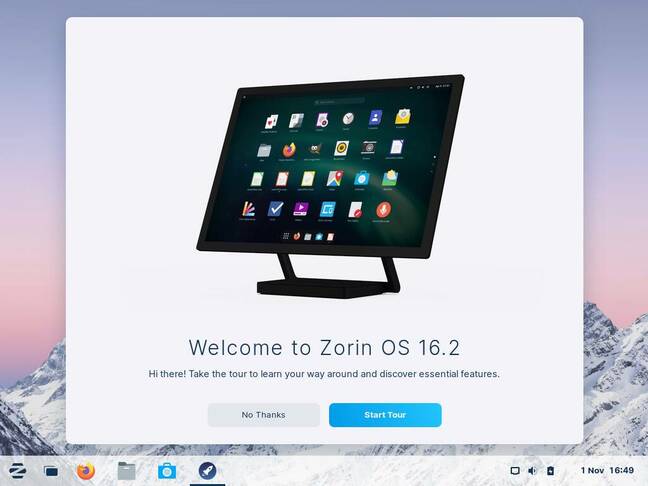 The Core editions are the same basic OS with various customizations, but a fairly basic app bundle, similar to the apps you get with basic Ubuntu. The Pro edition bundles in a selection of premium open source apps for Linux. Under Graphics there are Blender, Darktable, FreeCAD, Krita, LibreCAD, OpenToonz and Scribus. Under Sound and Video, there's Ardour, Audacity, Blanket, HandBrake, Kazam, Kdenlive, Mixxx, and OBS Studio. Under Office the selection is slightly more modest, but we found HomeBank, Minder, and Xournal++, alongside LibreOffice, and an assortment of GNOME apps: Calendar, Contacts, Evolution, the Foliate ebook reader, Maps, Weather and more.

As a result, the Pro versions require a minimum of 32GB to install, and still only leave about 3.5GB available. On our first test installation, into a test partition of about 29GB, we were able to install the OS, but then unable to update it – there wasn't enough free space left. Many of the big-name bonus apps are installed as Flatpaks, which means they take even more room. 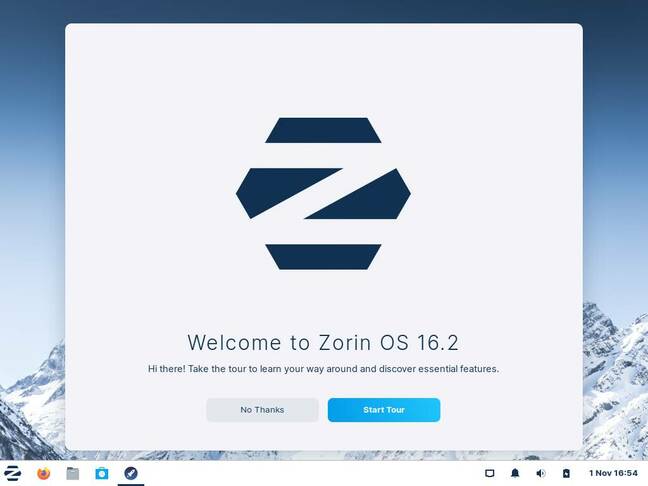 The most remarkable thing about the Lite version of Zorin OS 16.2 is just how closely the company has made Xfce resemble its version of GNOME

There is more to Zorin OS than the bundled apps, though. The standard edition uses GNOME 3.38, but with a suite of special Zorin extensions that extensively restyle it to make it look more Windows-like, with a start menu, taskbar, and so on. There are a set of custom Zorin themes, with the default a clean white look with a snowy mountain range as the wallpaper. The Xfce desktop has been customized to match, complete with the Docklike taskbar addon to give big icons for running apps.

The attention to detail is noteworthy. For instance, when run in VirtualBox, the installation program notices and offers to install the guest additions, and the boot media have a menu option to install the current Nvidia binary drivers. The result is that, despite having different desktops, both the normal and "Lite" versions look very similar: clean, fresh, and modern, but with a familiar desktop layout – unlike GNOME itself.

If you don't like the superficially Windows 10 look, the Zorin Appearance app offers half a dozen alternate desktop layouts, with options to resemble Windows 11 (for instance, centered taskbar buttons), Windows XP (textual taskbar buttons), vanilla GNOME, Ubuntu's tweaked GNOME (with a permanent dock), and a vaguely Mac-like layout. This only changes the layout of the desktop – there are no global menu bars or anything functionally different, and the default accessories are mostly GNOME ones without menu bars anyway – but it's a neat touch. 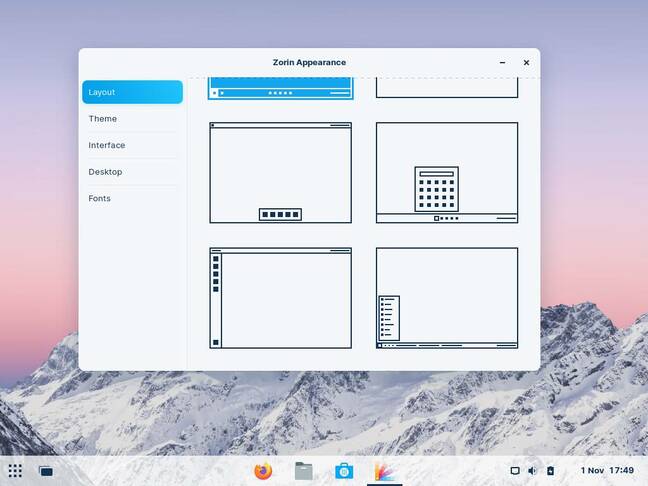 The 'Zorin Appearance' app lets you choose from half a dozen pre-defined layouts, reshaping GNOME or Xfce into various other OS layouts

The bundled version of Firefox is native, able to install GNOME extensions and so on, and no Snaps are preinstalled at all, only Flatpaks. AppImage support is also preinstalled, so that the third cross-platform package format just works too, without any intervention.

The distro and the company are named after founders Artyom and Kirill Zorin, who live in Ireland and have been interviewed in the Irish Times, as well as Itsfoss. They started the company when they were 12 and 14.

We suspect that they're doing quite well out of Zorin OS: in March when announcing version 6.1, Artyom said they were donating the next week's sales profits to Ukraine, their parents' homeland. A week later, they gave a whopping €31,366.77 ($34,681.05) to the Red Cross, Médecins sans Frontières, and Tabletochki.

The Reg FOSS desk tends to prefers Xfce to GNOME, even with customization, but the approach of doing this with extensions may prove easier and more maintainable than a total fork, as another Irish company offering an Ubuntu derivative, Linux Mint, did to create Cinnamon – but Mint's way offers the advantage of a more complete traditional UI, with menu bars and so on.

At $39, Zorin OS Pro isn't expensive, and only business users need per-machine licenses: home users can run one copy on as many boxes as they wish. The company is also working on a tool called Grid for managing fleets of machines.

We do feel the need to point out that you could just install the apps you want from Zorin's selection yourself, for nothing, and end up with a smaller result. Still, Zorin OS adds useful extra polish to the basic Ubuntu (or Xubuntu) experience – as do Linux Lite or Linux Mint, of course, and neither charges for their offerings, although Linux Lite does solicit donations, as Ubuntu did a decade ago.

Other users might prefer a distro which removes bulk, such as Zinc or perhaps MX Linux, but they are aiming at more experienced users. There's room for different teams to go in both directions.

Zorin OS adds a definite benefit in convenience, a substantial amount of additional functionality, and by paying you are supporting a small company in its efforts. None of those are anything to criticize. ®