Also one of the first distros we've seen with Kernel 6.0

Nitrux OS is one of the most stylish and innovative distros we've seen so far: systemd-free, based on AppImages, and with a very unusual desktop.

Nitrux OS version 2.5 is the latest version of this innovative distro, led by Uri Herrera from Coacalco on the outskirts of Mexico City. It's nominally based on Debian and KDE, but it doesn't look or feel like any other KDE OS, or work much like any other Debian either. It doesn't use systemd, replacing it with OpenRC, as used in the minimal Alpine Linux distro.

It uses the vendor-neutral AppImage packaging format, and mostly uses its own independently developed applications. Even so, it's bang up to date: version 2.5 has the latest Linux kernel 6.0, and uses tech from KDE 5.26. 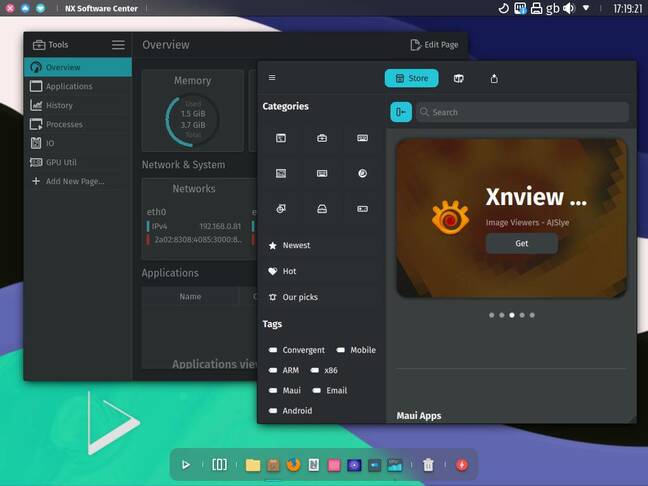 Nitrux OS 2.5 is in a league of its own, with a novel desktop and an unusual approach to app packaging

Nitrux calls its UI the NX Desktop and it's not quite like anything else. We think we detect some influences from GNOME, macOS, and phone UIs, but it's not a copy of anything else. It's distinct, its own thing, and we admire that.

The system has a floating dock at the bottom, based on a customized version of KDE's Latte dock, which is used for launching and switching between apps. Windows have no title bar, although they have a toolbar at the top which you can grab to move them.

Unlike GNOME's CSD, which attempts to combine the functions of the toolbar and titlebar and eliminates menu bars, NX Desktop windows do have window controls – but they're in the top panel, on the left. Next in the panel appears the title of the current window, then there's an optional menu bar which some apps, such as the System Settings app, can use. Then, on the right, are various notification icons, followed by an arrow that conceals some less used ones, and finally the clock.

A notification panel slides in from the right if you click on the bell icon in the panel. When switching windows, they slide up and behind one another, while the desktop theme is colourful, its use of animations and 3D shading is very restricted. We like it: we haven't seen KDE look this good since the days of the Bluecurve theme in Red Hat Linux.

It's not quite like any other desktop layout, but it works, although it will take some getting used to. The top panel does much more than either the GNOME version or the very underused one in Elementary OS's Pantheon desktop. While their panels feel like a waste of screen space, the NX one earns its place.

Nitrux OS includes a whole library of its own apps, built using a framework it calls MauiKit. (As far as we can see, this is unrelated to the .NET multiplatform UI that's also called MAUI.) This includes the Nota text editor, Vvave audio player, Clip video player, Index file manager, Strike IDE, Station terminal emulator, Shelf document viewer, Pix image organizer, and so on – you will find very few familiar names other than Firefox.

There are pre-loaded tools to install Steam, the itch.io games store, the Bottles wrapper for WINE, and more, plus the NX Software Center, which contains plenty of AppImage-packaged software, including things like Skype and Google Chrome. Shortage of applications shouldn't be a problem. Nor should drivers, and an Nvidia driver installer is included.

In honesty, the Maui apps are a little inconsistent. Some have a hamburger button to open menus, but not all, and the button moves around a bit and sometimes changes appearance. Some apps look very much like their mobile counterparts, and occasionally drop-down arrows don't fit inside their buttons.

But, to be fair, when we looked at KDE 5.24 on Neon, KDE itself has similar problems: some apps have menu bars, and some don't; some have a version number, and some a date.

KDE is a big, mature project, whereas Nitrux OS only appeared in 2018 and the company behind it, Nitrux Latinoamericana S.C., only got started a decade ago. We're more inclined to forgive the smaller, younger group.

Nitrux is different when you go under the hood too. It formats the root partition with XFS by default, the default shell is zsh, there's a global /Applications folder (although there's not much in it except Firefox), and Docker is installed by default. Unfortunately, we couldn't get it to boot on our venerable testbed ThinkPad W520, nor a T420 either. From an interview with the creator, we suspect that it needs newer UEFI firmware than these old machines have. On a newer Dell, it works fine and the UI is fast and fluid.

Nitrux OS is intriguingly different. It bucks a lot of current Linux industry trends while being boldly innovative. We're not sure it's going to become our new go-to distro, but it's exploring new territory and that's a very good thing. ®