Robots aren't hard. 5G in a room full of metal is. So is explaining why you need a bot to look at blinkenlights

Fujitsu Japan will trial a local 5G network as the sole connectivity option for a robot charged with inspecting a datacenter and reporting on any anomalies it finds.

From December 1, 2022 until March 17, 2023, an unnamed robot will roll around the Yokohama Data Center at Fujitsu Research Institute Limited.

The bot packs a 4K camera that will stream video and sound and, with the aid of unspecified analytics, detect any anomalies in servers by observing their blinking LED lights.

At this point readers may recall that servers are almost always wired into various management applications that detect and report any anomalies rather faster than will be possible if a robot is not due to roll by for a few minutes. This trial, therefore, probably does not fit into the genre of "Oh no, yet another robot threatening my career."

So why is Fujitsu bothering?

Fun with RF appears to be the answer. In the company's announcement of the trial, it mentions that the 5G network to which the robot will connect was built with a distributed antenna system designed to ensure 5G works in a server room with a low ceiling and many tall barriers. The network also extends to the power supply room for the datacenter – an environment with many high-voltage cables laid on the ceiling and leaking RF.

Fujitsu will measure the effectiveness of that network to test the performance of 5G in the challenging environment of a datacenter.

And that's where this trial matters most – because vendors are pushing private 5G networks as an alternative to Wi-Fi. Private 5G offers all the network slicing and virtualization smarts that can be used in a public network, and Wi-Fi lacks comparable features. 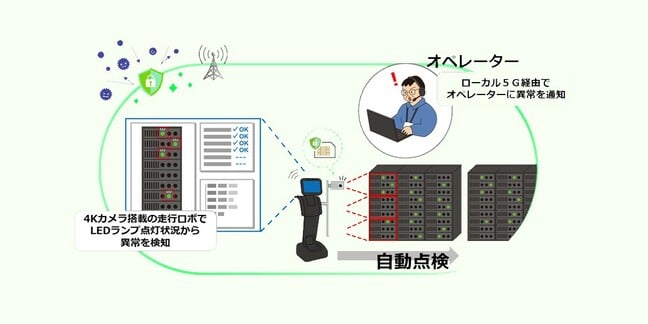 As private 5G becomes more pervasive, it is therefore suggested it could supplant Wi-Fi – both because it's better tech and because few organizations have the appetite to run multiple incompatible wireless networks.

There's another reason Fujitsu's datacenter bot probably won't take off: it's a bit rubbish. At least compared to the robot Alibaba Cloud uses to remove and replace dead disk drives within servers in its datacenters. Alibaba's bot can do that job in four minutes. ®