Stay warm this winter by fragging some baddies

The 14-liter system [PDF] can be equipped with your choice of full-fat 13th-gen desktop processors, including the company’s overclockable Core i9 13900K.

The 24-core, 32-thread chip boasts a 253W thermal design power (TDP) and despite Intel’s claims of improved thermals over last year’s Dragon Canyon NUC, we have our doubts the rather anemic blower fan pictured is up to the challenge.

In addition to power-hungry CPUs, Intel claims the diminutive system’s larger ventilated chassis is enough to support a 12-inch, triple-slot GPU up to 450W. Maxed out, this would put the system’s total power at a rather cozy 700-plus watts, although that would strain the 750W 80+ Gold power supply.

Intel’s Next Unit of Computing was originally intended as a barebones showcase for dense-yet-powerful small form factor PCs. However, over the past few years the company’s line up has grown larger as the chipmaker swapped laptop CPUs for desktop ones and made room for full-size dedicated GPUs.

For the NUC’s 10th anniversary, Intel has embraced a new design philosophy that makes heavier use of mesh and stacks the base system above the dedicated GPU, as opposed to stacking them back-to-back as with last year’s model. 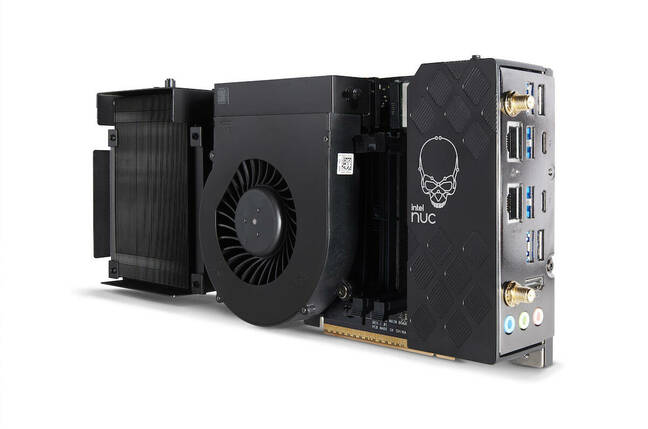 “The NUC 13 Extreme is an entirely new design and is not intended to be backwards compatible,” an Intel spokesperson told The Register in response to questions.

The Compute Element can be equipped with up to 64GB of DDR5 5,600MHz memory by way of twin SODIMM slots, while the system can be equipped with as many as three PCIe 4.0 NVMe SSDs for storage. The NUC also supports a bevy of high-speed I/O, including dual Thunderbolt 4 ports, six 10Gbit/sec USB3.2 Gen 2 ports, and 2.5Gbit/sec (Intel i226-V) and 10Gbit/sec (Aquantia AQC113) NICs. Finally, wireless connectivity is achieved using Intel’s Killer Wi-Fi 6E module.

All of that is packed into a system not much bigger than a graphics card. The compute module interfaces with the rest of the system using an edge connector that provides connectivity to the PCIe 5.0 16x slot used by the GPU.

The NUC 13 Extreme will initially be available in China, with broader availability in the fourth quarter and 2023. But it won't come cheap. The complete system can be had for between $1,179 and $1,549 or between $760 and $1,100 for the Compute Element, depending on whether you opt for an i5, i7, or i9 processor. However, those prices don’t include, a dedicated GPU, memory, storage, or the operating system, which can easily add another $600-$1,000 to the price tag.

Anyone interested in picking up one of these company workstations may want to hurry. Faced with poor sales figures — 10 million units in 10 years — at least one of our fellow vultures expects the NUC line won't survive CEO Pat Gelsinger's chopping block for long. ®