The world may never be free of unsmashable ads

The display subsidiary of Korea's sprawling LG Corporation said the full color RGB, 100ppi resolution screen – which stretches from a baseline 12 inches to 14 inches – is made from the same silicon materials as contact lenses.

Micro-LEDs sized at 40 micrometers or smaller over a spring-like system of circuits allow the screens to be twisted and stretched without permanent distortion.

The display resembles a heavy plastic wrapping, like something that might be used as a stiff book cover or even a tablecloth. 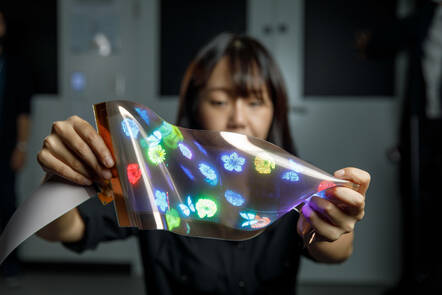 "Easily attachable to curved surfaces such as skin, clothing, furniture, automobiles and aircraft, this unique innovation expands the potential of the display in various industries including fashion, wearables, mobility and gaming," suggested the South Korean display panel maker. If LG has a plan for how a screen on a shirt might be washed, or how the displays would attach to the skin, it didn't reveal them.

Time is on the company's side, though. This week's reveal was touted as work in progress, due to deliver a finished item in 2024.

The project comes with pros and cons.

To start with, as a Micro-LED, the display will likely consume less power and have brighter colors than rival display techs like organic light-emitting diodes (OLEDs). Furthermore, the use of a resilient screen could be welcome to clumsy people, who would no longer have to deal with unsightly cracks in their electronic devices.

Additionally, the tech opens the possibility of displays on almost any surface with less bulk than is needed for other screens.

And while that's exciting, it's also scary that any surface at any time could be used to show advertising.

Resolution of 100ppi is decent, but it's not that good. The standard resolution for web images is 72ppi and the iPad Pro comes in at 264ppi. So LG's stretchy screen is not ready for smartphones, tablets and TVs in its current form, but could end up in places that people interact with on a less intense, and often unwilling, basis – like digital signage.

LG does reckon that the stretchable screen will do better than other recent display innovations.

The company has even debuted [VIDEO] a 14mm transparent silicon-based LED film that can be stuck on glass.

Despite LG Display's myriad innovative offerings, it suffered a loss last quarter. In late October, the company reported a quarterly operating loss of $560 million and an unprecedented decline in demand for sets and panels. ®