An international cyber-scammer and Instagram star who plotted to launder more than $300 million over the course of 18 months was this week jailed – and he must pay back more than $1.7 million to his victims.

Nigerian-born Ramon Olorunwa Abbas, 40, also known as Ray Hushpuppi, pleaded guilty to conspiracy and will spend 11 years and three months behind bars in the United States for his role in multiple online fraud sprees.

Abbas and his pals used business email compromise (BEC) attacks to steal money from a number of companies around the world, as well as private individuals, and even an unnamed English Premier League football club.

BEC attacks come in various forms. They typically involve hijacking legitimate email accounts, or impersonating legit accounts, to send out bogus invoices and fool marks into sending wads of money to crooks. The recipients are usually (but not always) finance staff at companies, and the senders may appear to be the employees' superiors (such as the CEO or CFO) or suppliers wanting payment. In fact, the victims are wiring money to fraudsters.

BEC can also be used to obtain sensitive data – such as employment records from HR departments – that can be sold online. According to the FBI, BEC scams are on the rise due to how lucrative they can be – just 19,954 victims handed over $2.4 billion last year, apparently.

Abbas was a prolific social media user, regularly posting photos of his lavish lifestyle to his 2.3 million followers. Photos of Abbas captured from his accounts show him living it up from his ill-gotten gains: relaxing on private jets, standing by luxury cars, and so on. Abbas was arrested in his adopted home of Dubai in June 2020 and extradited to the US, where he'll serve his sentence. 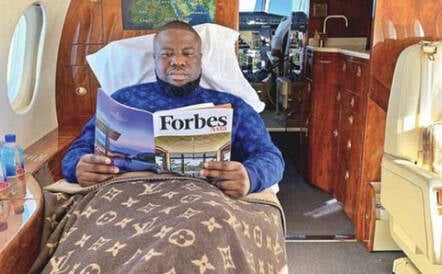 Abbas bankrolled his playboy world via a number of cybercrime campaigns, such as a pair of operations in 2019 in which he and another online scammer conspired to launder approximately $14.7 million (£12.6m) stolen from a bank in Malta, and the aforementioned scam targeting an English Premier League team and another UK company.

Abbas was also involved in the theft of approximately $992,857 (£851,022) from a New York law firm in 2019, and also admitted in his plea agreement that he had conspired to scam a Qatari individual seeking a $15m loan to build a school.

Crucially, Abbas was collared by the Feds for conspiring to launder more than $300 million, and as far as prosecutors could demonstrate, much of this was just planned. His "willingness and ability to participate in large-scale money laundering highlights the seriousness of his criminal conduct," the Dept of Justice added.

Abbas pleaded guilty to a single charge of conspiracy to engage in money laundering in April last year. The restitution he was ordered to pay, as part of his sentencing, will refund the money stolen from the New York law firm as well as $809,983 (£691,901) to the individual from Qatar.

Prosecutors further believe Abbas may have provided his money laundering services to the North Korean government, which US officials said was responsible for a bank intrusion in Malta in 2019. The amount stolen by North Korean hackers was the same amount Abbas admitted plotting to launder. ®