Walking – what a drag. How are you supposed to keep on the trillionaire crypto mogul grindset when you have to do something as mundane as placing one foot in front of the other to get to your next high-flying presentation?

Well, here comes Shift Robotics to revolutionize the process of movement humanity has relied on for at least three million years.

Looking for all the world like the Fisher Price roller skates of the '80s and '90s but for grown-ups, the company claims its "Moonwalkers" allow users to "walk at the speed of a run" but without all the unseemly sweating and hyperventilation.

Think of that groovy sensation you get when gliding along a travelator at an airport, silently mocking passers-by walking at a regular pace who have not yet ascended to godhood. Yes, that, but attached to the soles of your feet. 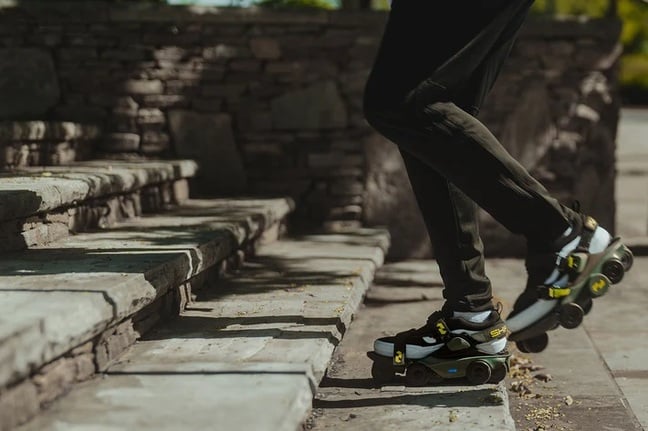 How does that work? The Moonwalkers are said to be fitted with an "AI drivetrain" that uses "machine learning algorithms to adapt to a user's walking gaits, making them an extension of people's legs."

As the company insists, it is therefore still "walking, not skating." The Moonwalkers don't freewheel like ordinary skates, allegedly moving only when you do, so you can "go up and down stairs, step into mass transit, and confidently wait at the crosswalk."

"You can stop in less than 1 meter from top speed, and we automatically regulate your speed downhill," Shift claims, saying that the Moonwalkers will boost your walking speed by 250 percent.

The genesis of the idea came when founder and CEO Xunjie Zhang was almost knocked off his scooter by a car while making his commute to work a mile away. "That's when Xunjie asked himself why he never walked to work," the company says, but it never explains why – it goes straight into the "mission to enhance walking instead of replacing it."

Most people can expect to walk a mile (1.6km) in 15 to 22 minutes, but in this day and age of instant gratification, ridiculous workloads, and even more absurd expectations, we can suppose that's just not fast enough.

"Our basic form of movement hasn't changed in six million years, we still walk the same way our great great great grandparents walked: slowly," Zhang says in a promotional video. "The way we walk is stuck in the past. It's time to bring it up to speed."

The fancy skates are charged by USB-C, meaning you can have them juicing up on your desk ahead of quitting time with a six-mile (9.65km) range in an hour and a half, so you can spend less time negotiating the city crowds and more time stuffing your crypto into cold wallets or, indeed, ridding yourself of it entirely. ®