Since mandatory reporting began in June 2021, the NHTSA has recorded 18 fatal accidents it said involved ADAS systems. All but one report involved a Tesla.

"NHTSA has reviewed these crashes and is conducting appropriate follow-up. NHTSA uses many data sources in its enforcement processes," the agency told Reuters.

The NHTSA began collecting data on ADAS accidents involving levels 1 and 2, the latter of which includes Tesla's Autopilot, in June 2021. Mandatory reporting began due to a general order from the Agency requiring all auto manufacturers with ADAS technology to report any and all accidents involving said tech.

The NHTSA defines ADAS level 2 as systems "which can simultaneously support vehicle lane position, speed, and following distance," but which require humans to maintain focus.

The Agency's first report, delivered in June of this year, found that Tesla accounted for 70 percent of ADAS accidents, or 270 of the 394 it was informed of between June '21 and June '22. Since then, the agency has reported new data monthly, with the latest report covering the month ending October 15.

Looking at the total number of ADAS crash reports submitted in the past year, Tesla dominates, although this is likely linked to the fact that there are more ADAS-equipped Teslas on the road than other vehicles. The Associated Press has previously claimed Tesla's crash rate per 1,000 vehicles is "substantially higher than the corresponding numbers for other automakers," although it didn't give further detail.

Musk's car company has submitted 474 ADAS crash reports to the NHTSA, while the next closest manufacturer, Honda, has reported 107 accidents. 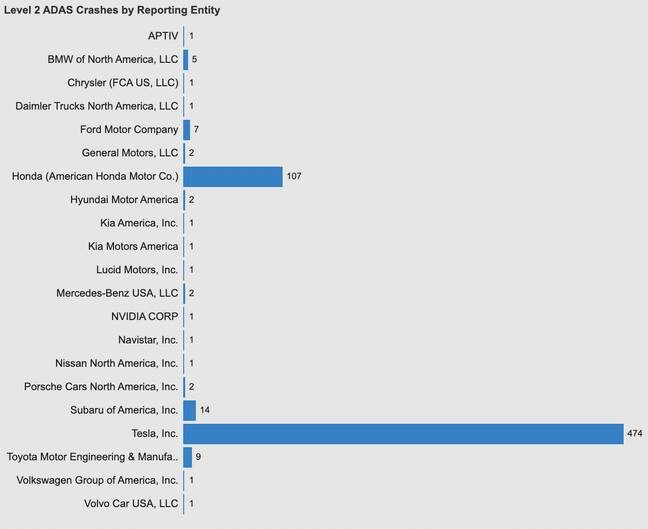 Honda has not reported a fatal ADAS accident to the NHTSA. Ford, which has reported seven total accidents, was the only company aside from Tesla to report a fatality linked to driver assist technology.

It's also worth noting that the NHTSA puts a number of caveats on its data, like the fact that an accident could be reported more than once, that reports aren't standardized between manufacturers or that manufacturers could simply opt not to report an accident.

Still, the NHTSA has been on Tesla's case for some time, having opened an investigation last year into a series of accidents that saw Teslas with Autopilot engaged crash into vehicles or emergency responders at the scene of other accidents.

Shortly before publishing its first list of ADAS accidents, the NHTSA announced that it was advancing its initial look at Tesla Autopilot to a formal engineering analysis, which could lead to a recall of 830,000 vehicles.

The agency expressed concern with the degree to which Autopilot may be making drivers, who are supposed to maintain alertness while using it, become complacent, leading to slower response times.

Tesla maintains that customers using Autopilot should keep their hands on the wheel at all times and remain attentive. ®