After several delays, NASA's Artemis I mission has finally launched and the Orion spacecraft is on its way to an orbital date with the Moon. There aren't any human passengers aboard, but that doesn't mean the mission is only about stress testing a new crew capsule.

The primary objective of the first Artemis mission is to test Orion's heat shield, mission operations and retrieval process – but there's a bunch of other stuff on board to test other craft functions too, and NASA isn't wasting the mission.

Orion isn't completely uncrewed: there are three dummies on board being used to measure radiation that future crews will face while flying to the Moon, or beyond.

Commander Moonikin Campos – named via a public contest – is a full-body mannequin occupying the commander's seat. First name aside, Arturo Campos was the Mexican-American electrical power subsystem manager for Apollo 13 whose work was key to giving the astronauts enough power to return to Earth. 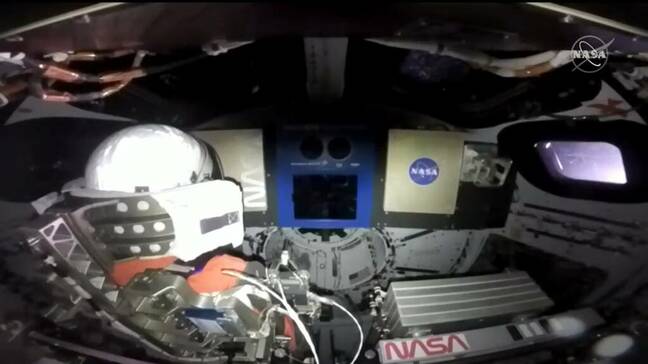 Commander Moonikin Campos in his seat

Helga and Zohar are a pair of identical mannequin torsos strapped into the crew seats on Orion that are "manufactured from materials that mimic human bones, soft tissues, and organs of an adult female," NASA explained.

The torsos are outfitted with more than 5,600 sensors and 34 active radiation detectors. The only difference between them is that Zohar is wearing a radiation protection vest that NASA is testing in partnership with the German Aerospace Center and Israel Space Agency, who got to pick the respective names.

There's also a pair of radiation-sensing experiments going on. NASA is testing six Radiation Area Monitors distributed throughout the craft to passively monitor radiation, and there is also the Hybrid Electronic Radiation Assessor, or HERA.

HERA is an active instrument that NASA sees as an early warning monitor for future crewed missions. The space agency said it will sound an alarm if too much radiation is detected in the crew compartment, signaling to astronauts to take shelter in a reinforced section of the craft.

Space seeds (and fungus, too)

It's a good thing for Orion's dummy crew that no food is needed. There are only the faintest traces of edible material on board, and it's earmarked for something besides eating.

Inside the Orion crew cabin are four biological samples being used to test the effects of deep space travel on the nutritional value of seeds, the ability of fungi to repair DNA damage, how yeast adapts to life in space, and whether gene expression in algae changes when removed from Earth.

The point of the experiments is the aforementioned supply of space food, which NASA says needs to be tested to see if space radiation will mess with nutrition. Long-term missions mean local production of resources.

"The common theme to these investigations is to study DNA damage and protection from radiation, for Moon missions, where radiation exposure will be roughly twice what it is on the International Space Station," NASA said.

Alexa, are we nearly there yet?

Science experiments on Orion are plenty, but there's also a commercial tech experiment that has put Amazon's Alexa and Cisco Webex right in the cockpit – in the center console, no less.

Dubbed Callisto, the project is meant to show how commercial tech could aid in future manned space missions. It involves the addition of a Webex tablet for video conferencing between crews and Mission Control, as well as an Alexa voice assistant that can respond to questions about ship status as well as issuing commands for the ship to perform a certain task. 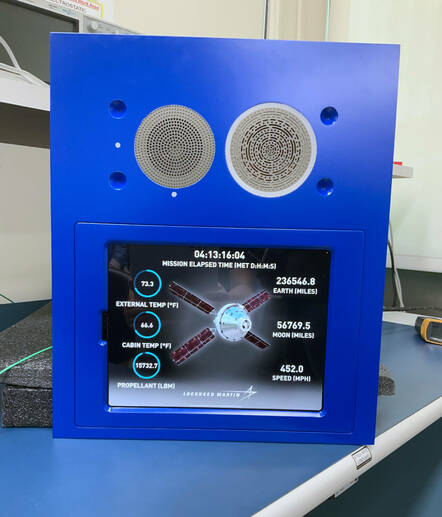 Of course, there's a lot of lag time between asking Alexa a question and getting a response from an Earth-based AWS server, so NASA has had to rig its system to include a local database.

"I can imagine a future where astronauts can access information on flight status and telemetry – such as spacecraft orientation, water supply levels or battery voltage status – through simple voice commands," said NASA's Orion program manager at Johnson Space Center, Howard Hu. No word, however, on whether or not Alexa will be able – or willing – to open the pod bay doors.

Asking Alexa about passing meteor storms and experimenting on seeds and fungus is important, but it's not as exciting as the set of ten shoebox-sized cubesats that hitched a ride on Artemis I.

The satellites – some from NASA and other space agencies, and some from researchers and private businesses – were housed in the Orion stage adapter. That's the portion of the larger launch craft that attached the Orion capsule to the SLS rocket.

Once the interim cryogenic propulsion stage gave Orion its boost out of Earth orbit and detached, all ten satellites were deployed and are now on course to their mission objectives. Some will join Orion on its trip to the Moon, but not all.

One satellite, known as the Lunar IceCube, is equipped with a spectrometer that it will use to investigate lunar ice. NASA has known for some time that there's water ice on the Moon, it said, "but Lunar IceCube will further NASA's knowledge about lunar ice dynamics." 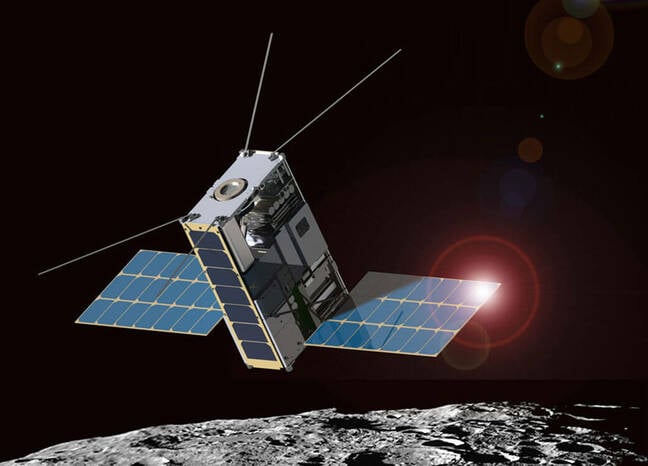 Scientists on Earth will use IceCube to study the absorption and release of water into the lunar regolith, as well as use it to examine the thin lunar atmosphere.

The Lunar Polar Hydrogen Mapper is also headed to the Moon, where it will study the distribution and amount of hydrogen on the Moon's south pole. During its 60-day mission, NASA hopes to develop a high-resolution map of the Moon's bulk water deposits and whether such water could serve as a resource for long-term Moon missions.

LunIR will only be performing a lunar flyby, but during its mission will use a miniature infrared sensor to gather images about the Moon's surface. Data gathered will include material composition, thermal signatures, the presence of water, and identification of possible landing sites.

The cubesat to study Solar Particles – or CuSP – won't be hanging around. It used its Artemis-boosted launch to start an orbit around the Sun that will eventually shoot it out into interplanetary space, where it will measure space radiation headed toward Earth – functioning like a space weather satellite.

OMOTENASHI, on the other hand, is headed straight for the Moon and plans to land there. The Japanese-designed lunar lander will demonstrate how low-cost and small landing craft could be used to explore the lunar surface.

EQUULEUS is headed toward the Moon, but not all the way there. It will take up residence at Earth-Moon Lagrange Point 2, where the gravitational pull of the Moon and Earth are the same. While there, EQUULEUS will measure the distribution of Earth's plasmasphere, which NASA said will provide insight into how to protect humans and electronics during deep space journeys.

The BioSentinel cubesat is the first long-duration biology experiment to take place beyond the orbit of the International Space Station, NASA said. BioSentinel contains samples of two different yeast strains, which the craft will activate periodically throughout the six- to 12-month mission. The goal of the mission is to see how the two strains respond to space radiation to help NASA develop strategies for reducing radiation damage in astronauts. 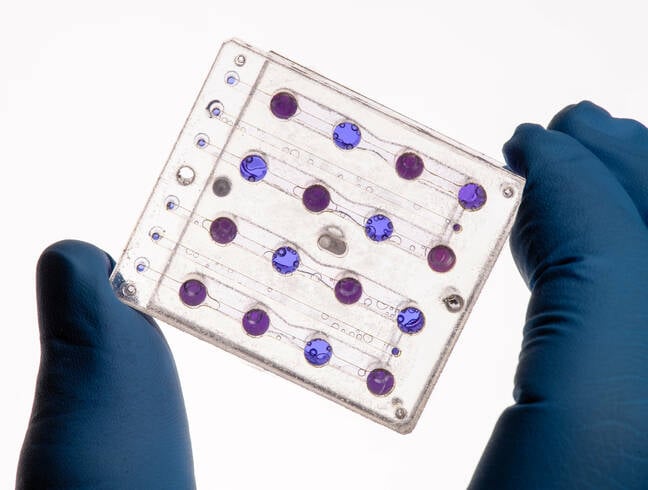 The Italian space agency's ArgoMoon also took flight with Artemis. The craft is outfitted with advanced cameras and imaging software to record images of Orion, as well as the Earth and Moon. The pictures are being captured for "historical documentation," as well as to provide data on the deployment of the other cubesats and to test optical communications with Earth.

NASA also launched a cubesat called Near-Earth Asteroid Scout on a course for an asteroid known as 2020 GE, which is less than 60 feet across. It will be the first time a spacecraft has visited an asteroid smaller than 330 feet across, NASA said. NEA Scout will make its approach in September 2023.

Finally, there's a satellite called Team Miles on board, which was developed in partnership with software company Fluid & Reason as part of NASA's Cube Quest Challenge which offered grants to groups developing cubesats.

Team Miles will be heading into deep space on its mission, with a plan to travel farther than any tiny craft before it. The team's objective is to win a communications distance prize, so they're aiming for 100 million kilometers (56 million miles) of communication distance. For comparison, the Sun is around 148 million kilometers from Earth.

The communications system isn't the only interesting thing about Team Miles. The craft boasts a new form of ionic plasma propulsion that uses "a very minute amount of fuel to achieve a huge amount of thrust," the company explained in a NASA video about the project.

NASA had plans to add an additional three satellites, but the Lunar Flashlight, Cislunar Explorer, and Earth Escape Explorer all failed to meet deadlines and check-in times for these trips are very strict. Hopefully Artemis I will be a success so those three can find their way on board the next launch. ®