While Mars might have looked a bit like Earth once upon a time, these days they couldn't be much more different. One's a red dust bowl, the other is a beautiful blue marble containing all the life we know of. But ESA and NASA scientists have found some surprising common ground – clouds.

OK, Mars's are made of dust and Earth's from water, yet cameras on ESA's Mars Express and NASA's Mars Reconnaissance Orbiter have found they behave similarly despite the extreme differences in atmosphere.

During the Martian spring of 2019, the orbital probes' cameras were trained on the planet's North Pole because of the number of storms that are whipped up around the receding ice cap.

What they saw was that "the storms appear to grow and disappear in repeated cycles over a period of days, exhibiting common features and shapes," ESA said.

"Spiral shapes are notably visible... The spirals are between 1,000 and 2,000km in length, and their origin is the same as that of the extratropical cyclones observed in Earth's mid-latitudes and polar latitudes." 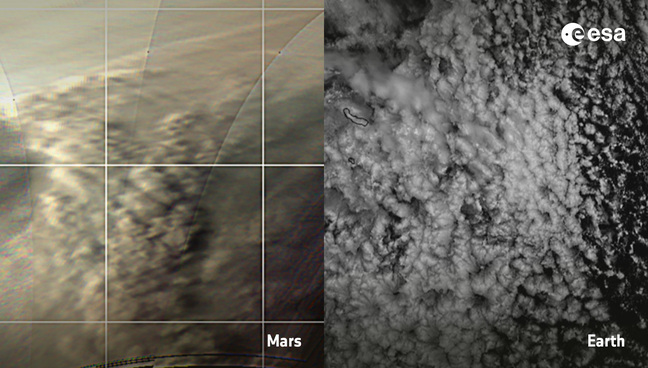 Essentially, clouds on Mars and Earth look similar. This is down to convection, where hot air rises because it is less dense than the cool air around it.

"On Earth, the rising air contains water which condenses to form clouds. The dust clouds imaged by Mars Express show the same process, but on Mars the rising air columns contain dust rather than water," ESA said. "The Sun heats dust-laden air causing it to rise and form dusty cells. The cells are surrounded by areas of sinking air which have less dust. This gives rise to the granular pattern also seen in the image of clouds on Earth."

Note that Mars does not have "air" per se; its atmosphere is composed almost entirely of carbon dioxide.

NASA and ESA were actually able to measure the wind speeds by tracking the movement of cloud cells in the images caught by the probes, and found gusts of up to 140km/h. They were also able to measure the clouds' altitude by combining the length of their shadows with knowledge of the Sun's position: "Results revealed that dust can reach approximately 6-11km above the ground and the cells have typical horizontal sizes of 20-40km."

Colin Wilson, Mars Express project scientist, commented: "When thinking of a Mars-like atmosphere on Earth, one might easily think of a dry desert or polar region. It is quite unexpected then, that through tracking the chaotic movement of dust storms, that parallels can be drawn with the processes that occur in Earth's moist, hot, and decidedly very un-Mars-like tropical regions."

Agustín Sánchez-Levaga from the Visual Monitoring Camera science team added: "Despite the unpredictable behavior of dust storms on Mars and the strong wind gusts that accompany them, we have seen that within their complexity, organized structures such as fronts and cellular convection patterns can emerge.

"Our work on Mars dry convection is a further example of the value of comparative studies of similar phenomena occurring in planetary atmospheres in order to better understand the mechanisms underlying them under different conditions and environments."

While there is value in studying planetary atmospheres for the sake of science, it is also useful for future missions to Mars. Remember the sad story of the Opportunity rover whose mission was ended by a planet-wide dust storm in 2018 that clogged its solar panels. In 2022, the Mars InSight lander is facing a similar predicament, and may only have a matter of days left.

"Monitoring the evolution of dust storms is crucial for helping protect future solar-powered missions – and eventually crewed missions to the planet – against such powerful phenomena," ESA said.

The scientists have published their full findings in the Icarus journal. ®