The big addition to both is a virtual trusted platform module (TPM) – an essential requirement for running Windows 11 as a guest OS.

VMware's product line manager for desktop hypervisors, Michael Roy, explained the TPM relies on a "fast encryption" option for VMs that "only encrypts the parts of the VM necessary to support the TPM device, making it performant while maintaining security."

Roy wrote that fast encryption uses the same encryption strength as a full-encrypted VM, but that the partial encryption means faster performance.

"The encryption password is also stored in the Mac's Keychain so that you don't need to type it in every time you boot the VM," he added. "The VM can also auto-generate a password, or you can specify your own instead."

VM Player – which can only play VMs rather than allow their creation, and is often deployed as a client to run software appliances – can also run the virtual TPM.

On Apple Silicon, Fusion is of course restricted to running guest OSes written for Arm. While Windows for Arm is available to download, Microsoft does not license it to individuals.

Fusion on Apple Silicon is a little behind its cousin for Intel Macs.

"On Intel Macs you’ll notice full support for Windows 11 with VMware Tools allowing for host-guest interactions like Drag & Drop, or Copy & Paste, as well as shared folders and USB and Camera device passthrough," Roy wrote. "On Apple Silicon, we've introduced our first round of features for Windows 11 on Arm. In this release VMware Tools provides virtual graphics and networking, and more is still to come. With certified and signed drivers Windows 11 looks fantastic, and adjust the resolution to 4K and beyond!" 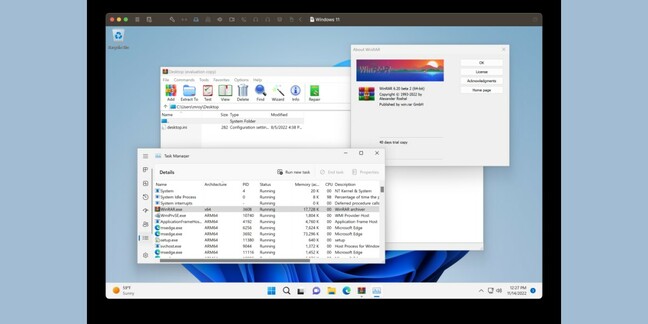 The Register understands that the work that went into Fusion on Apple Silicon overlapped with VMware's efforts to create a version of its ESXi hypervisor for Arm-powered datacenter hardware. Virtzilla has been quiet about when or if that might debut.

One thing VMware has snuck out is news of an unsupported "fling" to run offline virtual Windows desktops. The tweet below offers links to more info.

Bringing together the power of VMware Workstation & Player with secure management from @WorkspaceONE https://t.co/yq9sc9IWEw pic.twitter.com/l2zaGrGdpX