We knew Wasp 39b was rich in CO2, but now we have the full molecular picture

The James Webb Space Telescope keeps opening the world to new science. This time it's the first molecular and chemical profile of an exoplanet's atmosphere, complete with signs of active photochemical reactions.

As part of the full chemical profile of exoplanet Wasp 39b – where earlier this summer Webb found clear evidence of carbon dioxide in an exoplanet atmosphere – NASA said the telescope picked up more CO2, as well as carbon monoxide, sodium, potassium and water vapor.

Sulfur dioxide (SO2) was detected as well, which University of Oxford researcher Shang-Min Tsai said is concrete evidence of photochemistry – chemical reactions initiated by light hitting a planet's atmosphere. Earth's ozone layer was formed through photochemistry, for example.

"I see this as a really promising outlook for advancing our understanding of exoplanet atmospheres," Tsai said.

Like when it detected CO2 in Wasp 39b's atmosphere, the JWST relied on the planet's transit around its star and how chemicals in its atmosphere affected the wavelengths of light the telescope detected. As light hits various elements, they reflect different wavelengths, which the JWST can detect with exacting precision. 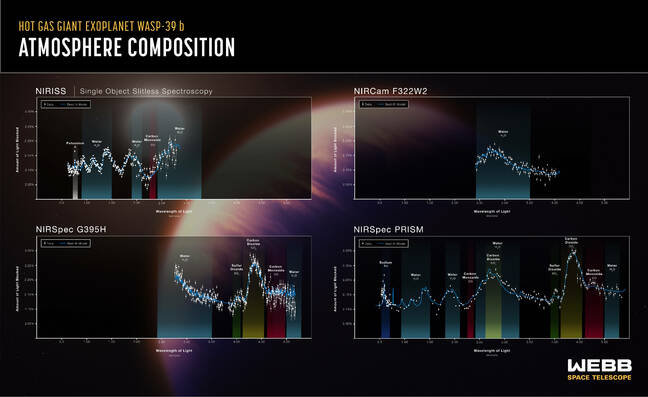 Wasp 39b's full atmospheric profile, as captured by the JWST

Great: We know what's in the atmosphere of a gas giant eight times closer to its star than Mercury is to the Sun. So?

For one, the roster of chemicals in an atmosphere provides researchers with ratios between them, which NASA said is a fundamental part of determining how planets form. Kazumasa Ohno, a University of California Santa Cruz exoplanet researcher who worked with the JWST's data, said that the chemical makeup of Wasp 39b gives researchers some clues.

"The abundance of sulfur [relative to] hydrogen indicated that the planet presumably experienced significant accretion of planetesimals," Ohno said. "The data also indicates that the oxygen is a lot more abundant than the carbon in the atmosphere. This potentially indicates that WASP-39 b originally formed far away from the central star."

It was that application that NASA said resulted in improvements to its modeling capabilities that will "help build the technological know-how to interpret potential signs of habitability" in other exoplanets.

University of Bristol astrophysicist Hannah Wakeford said that the Webb team predicted how well the observatory would work, "but it was more precise, more diverse, and more beautiful than I actually believed it would be."

With a long, hard look at Wasp 39b out of the way and Webb's instruments performing above expectations, NASA is ready for additional investigations of exoplanets. It may start looking at rockier worlds, like those in the TRAPPIST-1 system – several of which sit in the star's habitable zone.

Cornell University researcher and member of the Webb international team, Laura Flagg, said that the future looks bright for the JWST. "We are going to be able to see the big picture of exoplanet atmospheres … It is incredibly exciting to know that everything is going to be rewritten." ®