Lawson, a Japan-based chain of convenience stores with 17,600 outlets – 14,000 of them in the land of the Rising Sun – has opened its first store staffed almost entirely by avatars.

Plenty of retailers around the world have added unstaffed checkouts to save money and shorten queues. Some retailers, such as Amazon Go, have automated their stores so that products don't even need to be scanned to find a price. Yet even retailers that have added such automation tend to retain a few humans on-site to stack shelves, handle inquiries, or fix the seemingly inevitable errors produced by self-service checkouts.

Lawson has taken a different approach: the Green Lawson store, opened yesterday, will show shoppers an avatar on a screen, backed by a remote worker to answer queries or to process those few transactions – such as purchases of tickets – that can't be done with self-service tech.

The chain has spun this approach as inclusive because it allows folks who might struggle to work in a retail environment to participate from afar.

In typical Japanese style, those remote staff will be represented on site by cartoonish avatars – one male, one female – to put a face to the voice that emerges from speakers at the checkout counters. 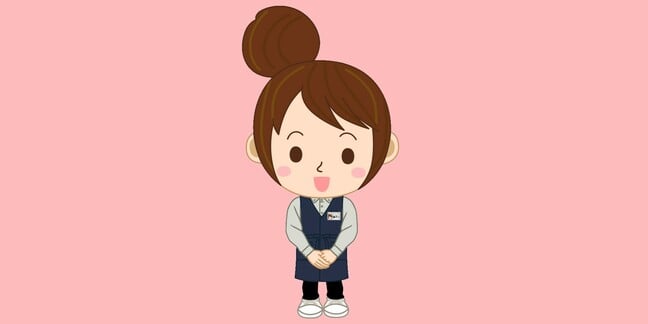 The stores also feature robotic systems that can detect when shoppers are standing in front of a shelf and automatically extoll a product's virtues with banter such as "It's very delicious. I want you to pick it up."

Automated systems will also check shoppers' IDs to verify their age when shopping for booze or cigarettes.

Some human staff will remain at Green Lawson stores – dressed in deliberately genderless uniforms – but the company wants them to engage with customers rather than stay behind a cash register.

Green Lawson stores will also use less plastic than other branches. Other initiatives include a food bank, recycling facilities for unwanted clothes, and numerous energy-saving additions to fridges and freezers. ®