Too bad the RAM is baked on

Packing a 35W CPU onto a board barely larger than a Raspberry Pi might sound like a bad idea, but that's not stopping Asus' Aaeon product division.

The company Wednesday unveiled a 4.7x4.8-inch single-board computer (SBC), called the UP Xtreme i12, that can be spec'd up to a 12-core/16-thread 12th-Gen Intel Core i7 1280PE. For reference, that's a notebook-class chip capable of consuming a sustained 35W of power and boosting to 4.5GHz.

For those who don't need something quite as powerful or as hot as the i7, the board is also available with a five-core Celeron, an octa-core i3, or a 12-core i5. However, as was the case with Aaeon's GENE-ADP6 announced earlier this year, only the i5 and i7 SKUs benefit from Intel's Iris Xe integrated graphics. 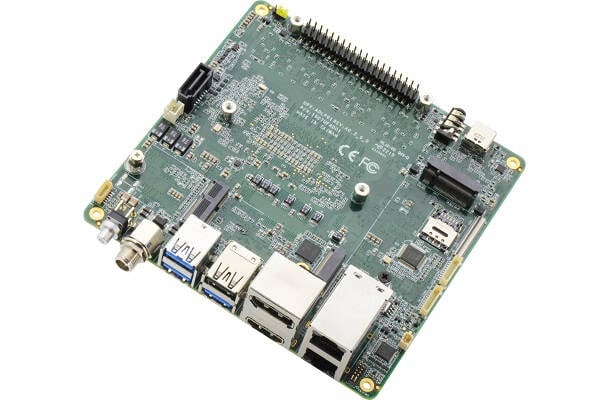 Asus' Aaeon UP Xtreme i12 single board computer (click to enlarge)

Aaeon specializes in embedded and small-form factor SBCs for industrial and military applications, and has a long history of packing full-fat x86 chips into diminutive systems. The i12 is its latest and most compact yet to feature Intel's 12th-gen Alder Lake CPUs.

Like most SBCs, the Xtreme i12 doesn't offer much in terms of upgradability. Unlike many of Aaeon's earlier SBCs, the i12 ditches modular SODIMM memory in favor of either 8GB or 16GB of dual-channel LPDDR5 4800MTps that's baked right onto the board. So, just like a Raspberry pie — or most notebooks these days — you'll need to decide up front how much memory your workloads are going to need.

In its marketing, Aaeon claims the board can be kitted out with 32GB of memory, but that particular SKU appears to be missing from the board's spec sheet [PDF].

Storage is provided by way of a single m.2 2280 mSATA/NVMe SSD with support for PCIe 4.0 x4 connectivity. And thanks to the relatively beefy CPU you can actually expect to extract speeds north of 6GBps from a compatible SSD. For those who need more storage, the board also features a solitary SATA 3.0 interface good for spinning rust or older 2.5-inch SSDs.

However, it's I/O where the i12 shines. The board is bristling with high-speed interfaces including three 10Gbps USB 3.2 Gen 2 ports, and a 40Gbps USB 4.0 Type-C port.

The inclusion of USB 4.0 is interesting because it opens up the potential for Thunderbolt-style PCIe expansion for things like external GPU enclosures or high speed storage. Unfortunately, unlike Thunderbolt, support for PCIe connectivity on USB 4.0 is an optional capability and it's not clear whether Aaeon has enabled it on this board.

Meanwhile, those looking to connect this board up to legacy systems will be happy to know it also features headers for RS-232 serial and 40-pin GPIO.

Finally, the board can set up for wireless or cellular connectivity by plugging a compatible wireless or 5G modem into the board's m.2 E and B key slots.

Aaeon's SBCs are designed for industrial, embedded, and military applications, and as you'd imagine this usually means they command a hefty premium over what their specs would suggest. While the company hasn't shared pricing for the i12 dev board, we don't expect it'll be cheap. The company's previously announced 12-gen i5-equipped GENE-ADP6, does offer some clues on pricing. That system is listed on Aaeon's eStore at $1,077, and that's before you factor in the cost of memory or storage. ®