For one so young, it's oddly not into heavy metal

A nearby galaxy – dubbed Peekaboo because it has long been hidden behind a star – has finally come into view enough for NASA to discover that it's more than just a tease. It offers a glance into the early universe, despite being one of the youngest galaxies ever detected. 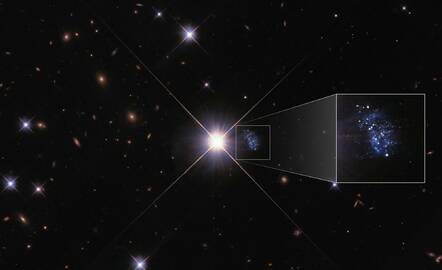 Like the earliest known galaxies in the universe, Peekaboo – also more romantically dubbed HIPASS J1131-31 – is "extremely metal poor" (XMP). That means it lacks the chemical elements that were formed after the Big Bang, and mostly consists of hydrogen and helium.

The astronomers made their determination using a combination of spectroscopic analysis from the South African Large Telescope (SALT) and images captured by the Hubble Space Telescope. NASA said the venerable Hubble was able to resolve around 60 stars in the fledgling galaxy, which is a mere 1,200 light years across.

It's an odd find in our universal neighborhood, where most galaxies are metal-rich, contain stars that are "many billions of years old," and "had about 13 billion years of cosmic history to develop," according to NASA. Peekaboo, by comparison, only contains stars that are "a few billion" years old, and possibly younger.

While it isn't unique (other XMP galaxies have been spotted in our vicinity), Peekaboo is earning scientists' interest because of how close it is. Just 20 million light years away, Peekaboo is half the distance of previously detected young XMP galaxies.

"Uncovering the Peekaboo Galaxy is like discovering a direct window into the past, allowing us to study its extreme environment and stars at a level of detail that is inaccessible in the distant, early universe," enthused STSI astronomer Gagandeep Anand, who co-authored a new analysis of Peekaboo.

It's about time you showed up

Australian astronomers first detected Peekaboo more than 20 years ago, when it was characterized as a "dwarf galaxy hiding behind [a star]," the anticipated motion of which "means it will have moved out of the way in about 100 years."

Thankfully, we – and its discoverer Bärbel Koribalski – managed to steal a glance at it before then. Koribalski, an astronomer at Australia's national science agency and also a co-author of the Peekaboo paper, explained that when it was first detected in a region of cold hydrogen, there was no way to detect specifics.

"At first we did not realize how special this little galaxy is," Koribalski told NASA.

"Metals", astronomically speaking, are regarded as any elements heavier than hydrogen and helium (and sometimes lithium). Nothing aside from those elements formed during the Big Bang, and anything else – which is most everything else – formed in the cores of early stars that also lacked those metals.

The amounts, types and locations of metals in more modern stars, like our Sun, means that they were formed in subsequent cosmic generations. Given its lack of heavy metals, Peekaboo's stars might be the closest look we've had at stars that are similar in makeup to the earliest in the universe.

Pop IIIs had lifespans that measured in the mere millions of years, Anand explained, while the stars detected in Peekaboo are at least one to two billion years old.

"So while the stars we see in Peekaboo may be relatively young as far as the nearby universe goes, it is unfortunately nowhere near as young as to contain Population III stars."

As for what we can learn now, Anand noted that Hubble's observations were "shallow" because they were made as part of a snapshot survey of nearby galaxies instead of being a dedicated observation of Peekaboo alone.

As a follow-up, the team plans to get a better, dedicated view of Peekaboo using the James Webb Space Telescope – and Hubble. Due to its proximity, Anand believes Peekaboo will provide plenty of new information about stellar populations.

For now, though, the why and how of its delayed formation – billions of years behind its neighbors – will remain a mystery. ®