It does most things well, some things right, and a few things bafflingly badly

Desktop Tourism HP's Elitebook 1040 x360 g9 is an anonymously solid laptop that packs one of Intel's Alder Lake CPUs – but doesn't feel special as a result.

The machine is certainly fast: video-centric benchmark application Cinebench rated it the ninth-fastest machine it knows by awarding it a score of 5,549. Yet the HP is powered by a modest Core i5 1235U that hums along at 1.30GHz but can surge to 4.4GHz on its two Performance cores or 3.3GHz on its Efficient cores.

Those different cores are utterly opaque to the user – there's never any indication which ones are at at work. If they improve performance, there's no indication of the effort they make. The accompanying 8GB RAM and a solid state disk that Windows reports as having 237GB of capacity are anodyne – their specs do not suggest they offer any special performance boost.

When I gave the machine my standard slightly nasty workload test – converting a five-minute 4K video to 1080p using Handbrake – it sailed through the chore in 3:41. That's faster than the Core i9-and-GPU-powered ASUS laptop I tested on our first Desktop Tourism foray.

The HP, however, hated running Handbrake in an Ubuntu VM under VMware Workstation and crawled over the file conversion finish line after more than 30 minutes. The combination of VMware and Ubuntu has often proven problematic in my tests, so I shan't single out this machine for condemnation on its late arrival.

Overall, however, the box sailed through my modest daily workload of writing, surfing with too many tabs left open, and streaming music. 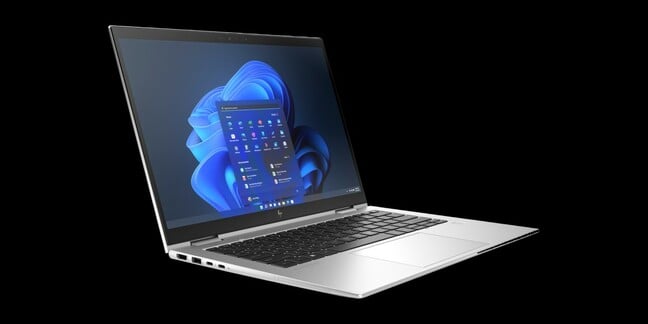 I approve of HP's decision to include both USB-A and USB-C ports. That's the right mix for a laptop in 2022 or 2023 because so many of us have USB-A peripherals we'd like to keep using without a dongle. The HDMI port is well-placed at the rear of the machine's left edge – a position that allows a cable through without getting in the way of other peripherals.

But placing the 3.5mm headphone jack at the rear of the right edge is a mistake. In my year of Desktop Tourism I've come to appreciate that the headphone jack should be as close as possible to users to prevent a stretch or a chair swivel pulling the cable taut and potentially leading to unpleasant kinetic consequences.

Desktop tourism? PCs and alternative devices have increasingly diversified into myriad and marvelous forms, so I've decided that in 2022 I'll use a different one each month – from the mainstream to the weird – and share the experience. Buy at your own risk: these aren't recommendations. This article is the latest in the Desktop Tourism series.

Another bad error is the omission of a niche to get a fingerhold and ease the task of opening the machine. Opening it on a plane could test your companions' patience, and agility.

Little mistakes like that stand out, because there are some very thoughtful additions – such as four tiny silicon strips that stop the screen resting on the keyboard when the machine is closed. Other laptops I've used end up with noticeable marks on their displays and the HP looks built to beat that.

The trackpad is large and responsive, the touchscreen renders colors with pleasing brightness and contrast, and the speakers omit no more subtleties than most other laptops and do a good job of filling a space with sound.

One thing the machine does very well is wake up. I was pleased to see virtual machines snap into life after I flipped the lid open. Lots of laptops I've used struggle to restore apps smartly, but the Elitebook has that sorted.

But then it lets you down again. The keyboard is poor. It's cramped, travel is short and unsatisfying.

It is also odd to behold: I haven't noticed keyboard typography for ages, yet this one stood out for a slightly off choice of typeface. It's simultaneously fresh and a little challenging because alternate inputs are displayed offset at top left, not centered.

Battery life maxed out at five hours, even with Windows instructed to preserve energy rather than prioritize power.

The Elitebook proves, once again, that Windows 10 tablet mode is useless. It changes too little of the WIMP interface to make it suitable for finger-or-stylus-driven operation. The absence of volume keys on the outside of the Elitebook only highlights how silly it is to expect users to revert to a mouse-driven UI to drive a device in tablet mode.

Tablet mode's shortcomings are made even more apparent by sending a persistent waft of unpleasantly warm air through a slot, making the device zero fun to hold after a minute or so of use. Not that you want to hold it, anyway, because at over 1kg it's just too big to be a fondleslab. Heftslab maybe.

HP offers the worst blizzard of nagware and adware I've seen in ages. One of the lovely things about USB-C is that cheap and utterly adequate chargers are widely available, meaning the market now offers choice instead of tying devices to laptop manufacturers' (usually slapdash) designs. Being told that I really should change to HP's provided power brick – a natty little unit spoiled by a chunky wall cable – is just galling.

It's probably naïvely optimistic to expect that when a new and significant processor architecture like Alder Lake comes along, computers will step up.

But the HP Elitebook 1040 x360 g9 feels like it could be from almost any point in the last half-decade. It's pretty, light, quick … and dull. Which is just what some users want. But this column is called Desktop Tourism, and we prefer to come home from each trip to a new device with fresh perspectives, vivid memories, and stories to share.

Desktop Tourism will therefore return in 2023, as we seek more sweet client-side sensations. ®