It's the Ice Age/Jurassic Park crossover we've been waiting for

Scientists have recovered the oldest DNA samples yet, in sediment left over from the Ice Age in Northern Greenland, according to research published in Nature. 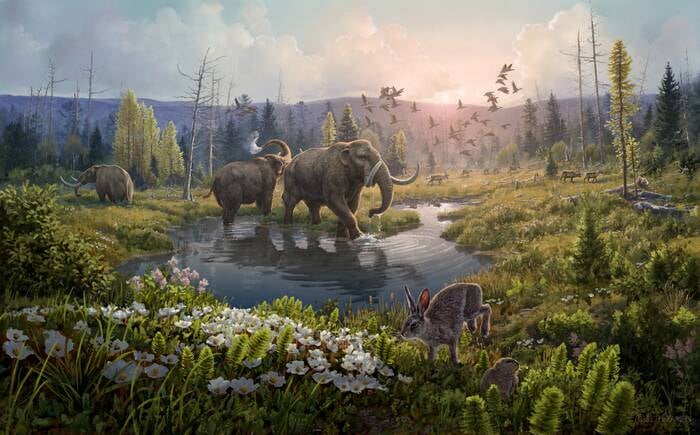 The tiny fragments of DNA molecules, preserved in clay and quartz, are estimated to date back two million years, making them the oldest specimens discovered yet. The record was previously held by a DNA sample taken from the frozen molar of a million-year-old woolly mammoth lodged in permafrost in Eastern Siberia.

Complete sets of DNA allow scientists to piece together an organism's genome – used to characterize and identify different species. However, when organisms die and decompose, their strands of DNA erode and break apart over time. Specific environmental conditions like extreme cold can sometimes slow that process and preserve some DNA.

The team of researchers led by the University of Copenhagen had to use statistical algorithms to recover an estimated 41 different samples from the broken, jumbled molecules. They identified various plants, animals, and microorganisms that once supported a rich ecosystem in Northern Greenland during the Ice Age millions of years ago.

"We believe a combination of environmental factors helped preserve the DNA. First, the fact it was frozen throughout the two million years; second, the type of minerals in the sediments also seemed to favor this," Mikkel Pedersen, co-author of the study and an assistant professor at the University of Copenhagen's GeoGenetics unit, told The Register.

Finding such old specimens allows scientists to study how life and the climate on Earth evolved over time. "There were certainly organisms that were a surprise – perhaps mostly the mastodon which has never been found this far north and were not expected to be in Greenland two million years ago," Pedersen added.

The tiny bits and pieces of DNA were lodged in a near 100-meter-thick deposit of sediment that formed at the mouth of a fjord in the Arctic Ocean. The team managed to identify the different plants and animals by comparing the fragments with genomes of known species. Work continues to characterize the ancient bacteria and fungi in the sample.

The scientists believe their discoveries could shed light on climate change. "The Kap København ecosystem, which has no present-day equivalent, existed at considerably higher temperatures than we have today – and because, on the face of it, the climate seems to have been similar to the climate we expect on our planet in the future due to global warming," Pedersen explained in a statement.

Kurt Kjær, first author of the paper and a professor also working in the University of Copenhagen's GeoGenetics section, continued: "It is possible that genetic engineering could mimic the strategy developed by plants and trees two million years ago to survive in a climate characterized by rising temperatures and prevent the extinction of some species, plants and trees. This is one of the reasons this scientific advance is so significant because it could reveal how to attempt to counteract the devastating impact of global warming."

He is also interested in trying to find ancient DNA samples in other types of environments – like the warm, humid weather in Africa. "If we can begin to explore ancient DNA in clay grains from Africa, we may be able to gather ground-breaking information about the origin of many different species – perhaps even new knowledge about the first humans and their ancestors. The possibilities are endless." ®