If he offers you a piece of the Chocolate Pi, be suspicious

A former technical surveillance officer at the UK's Eastern Region Special Operations Unit (ERSOU) – a team charged with tackling serious organized crime and terrorism across seven local police forces – has joined the Raspberry Pi Foundation and expressed his professional admiration for the organization's single board computers when pressed into service on police business.

Toby Roberts, the former officer, has been revealed as the Foundation's maker-in-residence – a gig devoted to baking Pis into all sorts of devices to assist pros and hobbyists alike do likewise.

"I have used Raspberry Pi a lot in various police tactics over the years," Roberts is quoted as saying in the Foundation's post announcing his appointment.

"I was a Technical Surveillance Officer for 15 years, so I built stuff to hide video, audio, and other covert gear," he explained. "You really don't want your sensitive police equipment discovered, so I'd disguise it as something else, like a piece of street furniture or a household item."

Or as chocolate: the image below depicts silicon molds that Roberts designed to contain the Raspberry Pi Pico W, one of the Foundation's microcontrollers. 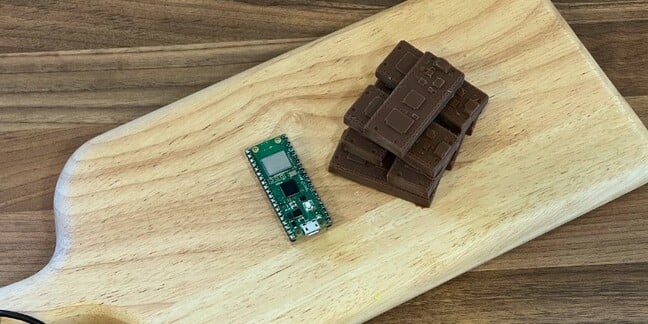 Roberts is a dab hand with 3D printers, and explained he's built Raspberry Pis into lightsabers and models of Iron Man's arc reactors.

Sadly, the post announcing his appointment doesn't mention exactly how he used the Pi while he was doing police work, or whether he'll consult to former colleagues or similar agencies in future.

Does Roberts's arrival mean readers need to be suspicious that a Chocolate Pi could rat them out?

The Raspberry Pi Pico W requires an external power supply, and unwrapped chocolate seldom lasts long. Your correspondent therefore suggests not much time would pass before a delicious spy Pi would be discovered – perhaps not long enough to capture any useful info.

If readers spot suspicious chocolate and suspect there's a Pi inside, we suggest placing some metal nearby. The Foundation’s guidance for users of the Pico W points out that its onboard Wi-Fi does best in free space.