To the four out of ten that didn't make it, we salute 'em

NASA's Orion capsule splashed down on Sunday, capping a very successful Artemis I mission for the Americans. That said, it was a less successful event for the mission's 10 tiny cubesats, four of which appear to be lost after a variety of malfunctions.

By all appearances Orion performed superbly, at least from the outside. The unmanned reusable podule is now onboard the USS Portland, which is ferrying it to shore where it will be transferred to a truck to be shipped back to Kennedy Space Center in Florida.

For Orion, Artemis I was a dress rehearsal of sorts: the podule was sent up to circle Earth's natural satellite before returning to our world to test the equipment and craft worked as expected. In future, Orion is expected to carry humans to the Moon. As well as this unmanned trial, a bunch of cubesats were also launched with the capsule to carry out science experiments in space.

And the cubesats Artemis I launched are just getting started – those that survived, at least. We won't know the full report until early January, a NASA representative told The Register, but some data has been released.

OMOTENASHI, the Japanese cubesat that contained a tiny lunar lander intended to demonstrate the feasibility of low-cost surface exploration vehicles, failed almost immediately after launch, albeit with no one aside from happenstance to blame.

The Japanese space agency's craft's solar cells failed to orient towards the Sun, meaning it couldn't get enough power to communicate with Earth. By November 22, less than a week after launch, the team gave up because they were never able to stabilize communication.

But where JAXA failed, Japanese space startup Ispace might succeed. The private company launched its own Moon mission using a SpaceX Falcon 9 that, if successful, will land the first commercial rover on our largest natural satellite in April.

Also lost was Lockheed Martin's LunIR satellite, which was intended to perform a lunar flyby that would gather infrared data about the Moon's surface. The data would have provided info about regolith composition, thermal signatures and the presence of water, as well as identifying potential landing spots.

On December 8, Lockheed Martin Space tweeted that an unexpected radio signal issue meant it wasn't going to be able to snap a single shot of the Moon.

Lockheed Martin said some good did come of the project, though: A new type of lightweight, long-life space cryocooler used in the failed spacecraft could be used to on future NASA missions to keep infrared scanners chilled.

Another silent satellite is the cubesat to Study Solar Particles, or CuSP, which had plans to reach interplanetary space in order to measure radiation headed toward Earth like a space weather satellite. While initial contact was successful, several issues cropped up and NASA has been unable to re-establish communication.

CuSP experienced three software reboots during initial contact, and its handlers also noticed a temperature spike from 34°C to 168°C in one of its batteries in under a minute. After a second heat spike, communication was lost, but NASA said it hasn't given up yet.

The Near-Earth Asteroid Scout, or NEA Scout, was supposed to reach a small asteroid known as 2020 GE next September, but it appears that rendezvous will never occur. It would have been the first cubesat to study an asteroid, and was planned to be propelled by an 86-square meter solar sail that turned out to be the indicator something was wrong. 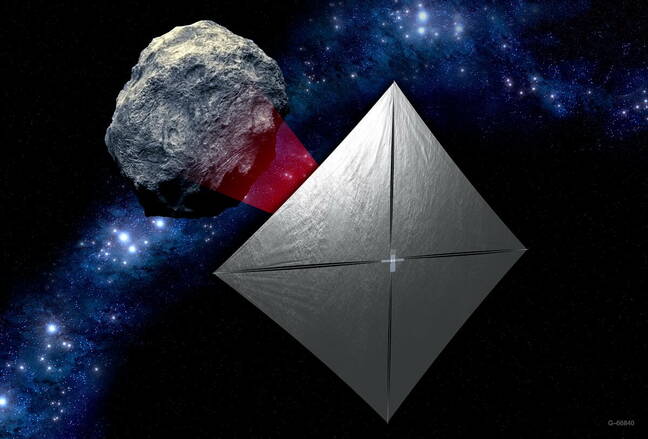 An artist's rendering of NASA's NEA Scout, shown here completing its mission, which it will never do ... Credit: NASA

The sail is reflective enough to be seen from the ground through a telescope, NASA said. Flight controllers tried to get NEA Scout to perform an emergency solar sail deployment twice shortly after launch, and neither command appears to have unfurled the sail.

Communications were spotty with a fifth cubesat, Team Miles' long-distance communication experiment craft, but the team behind it said communication was established late last week.

That's a lot of lost satellites, but it's not an unexpected number. NASA's own data on small satellite launches between 2000 and 2016, which includes cubesats and anything else under 500kg, found that 41.3 percent [PDF] of all launches "failed or partially failed."

Counting partial successes only reduces the failure rate to 38.2 percent, indicating that for such small, cheap and cheerful satellites, six-out-of-ten isn't that bad. ®