Scientists have used data from CERN's Large Hadron Collider to show how antimatter can travel long distances through the Milky Way, a result they hope could uncover the secrets of dark matter, the major cosmological mystery.

Led by Professor Laura Fabbietti of the Technical University of Munich, the team fed data relating to the behavior of antihelium nuclei produced at the LHC into a series of computer models to show the antimatter counterpart of a light atomic nucleus can travel a long distance in the Milky Way without being absorbed. 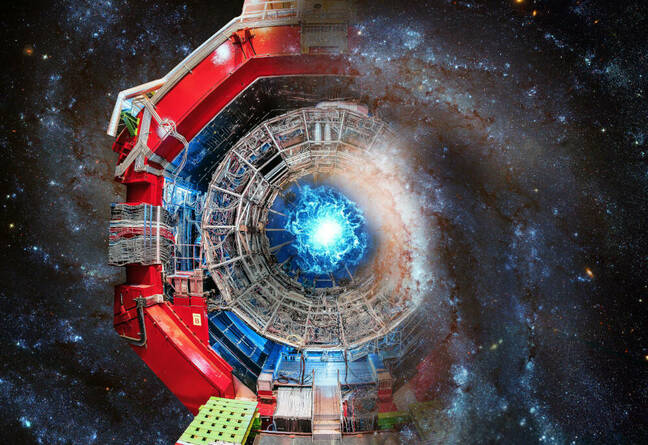 The results also predict the characteristics that anti-protons and anti-neutrons are likely to exhibit if they come from interactions between high-energy cosmic radiation or dark matter. They are likely to lay the foundation for future studies of dark matter.

According to observations of the gravitational effects in the Milky Way, estimates suggest approximately 85 percent of the galaxy is made up of a substance which is not visible in light or radio wave detectors – hence dark matter. Scientists have so far found it impossible to directly prove the existence of the material, something of a stumbling block in the quest to achieve a complete explanation of the cosmos.

Using data from A Large Ion Collider Experiment (ALICE), a project at the LHC, the researchers were able to uncover key features of the behavior of anti-nuclei, which could help understand when they have resulted from interaction with dark matter.

Antihelium-3 nuclei were produced in particle collisions then interacted with matter in the ALICE detector causing them to disappear. The resulting data was entered into a publicly available computer program called GALPROP, which simulates the propagation of cosmic particles, including antinuclei, in the galaxy.

The researchers looked at two models of the flux of antihelium-3 nuclei expected near the Earth after the nuclei's journey from sources in the Milky Way. One model assumes that the sources are cosmic-ray collisions with the interstellar medium, and another describes them as hypothetical dark matter particles called weakly interacting massive particles (WIMPs).

The model offers an analysis of the "transparency" of the galaxy to antimatter – how much of the material is likely to pass through space. The ALICE researchers showed about 50 percent transparency for interactions with dark matter and about 25 percent to 90 percent for cosmic rays, depending on the energy of the antinucleus.

"This is an excellent example of an interdisciplinary analysis that illustrates how measurements at particle accelerators can be directly linked with the study of cosmic rays in space," said Fabbietti in a statement.

The results, published in Nature Physics today, are of great importance for the search for antimatter in space with the AMS-02 module (Alpha Magnetic Spectrometer) on the International Space Station.

Meanwhile, a balloon experiment over the Arctic will also examine incoming cosmic rays for antihelium-3 starting from 2025, the statement said. ®