Audio data recorded by a NASA rover has, for the first time, allowed earthbound humans to hear the sound of a dust devil passing on the Martian surface.

Dust devils, whirlwinds which draw up dust from the surface, were first recorded on Mars in the 1970s by Viking orbiters. The 1990s Mars Pathfinder lander detected a dust devil passing over it, and animation of dust devils were recorded by NASA's Spirit, Curiosity and Perseverance rovers. 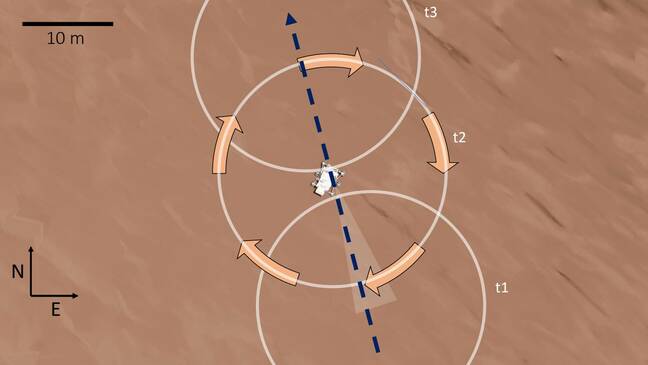 However, the sound of a Martian dust devil was inaccessible until Perseverance rover's SuperCam microphone recordings were published.

The researchers said the findings could improve understanding of surface changes, dust storms and climate variability on Mars, which may have implications for space exploration.

But the recording, which readers can hear in the embedded video, resulted from the unexpected encounter with the meteorological features passing directly over NASA's space hardware.

"This chance dust devil encounter demonstrates the potential of acoustic data for resolving the rapid wind structure of the Martian atmosphere and for directly quantifying wind-blown grain fluxes on Mars," the research paper, published in Nature Communications says.

In an email to The Register, Dr Murdoch explained: "There have been many different types of measurements of dust devils and convective vortices (dust-less devils) on Mars. These include images, wind, temperature and pressure data, dust content measurements and recently, thanks to the NASA InSight mission, we have even recorded the magnetic and seismic signals they produced on Mars. However, until this encounter with the SuperCam microphone, there had been never been a sound recording of a Martian dust devil."

Perseverance, NASA's largest and heaviest rover, touched down on the surface of Mars in the Jezero Crater in February 2021. The $2.7 billion machine is collecting and analyzing rock samples, some of which NASA plans to return to Earth in 2033.

As well as improving scientists' understanding of Mars' environment, the dust devil audio data could help predict the wear and tear on equipment being used to explore the planet.

"Improving our understanding of dust lifting and atmospheric transport is key for accurate simulation of the dust cycle and for the prediction of dust storms, in addition to being important for future space exploration as grain impacts are implicated in the degradation of hardware on the surface of Mars," the research paper says. ®