America's nuclear fusion 'breakthrough' is super-hot ... yet far from practical

First ignition is awesome, but economics and engineering to deliver clean energy promise are nowhere

Scientists at Lawrence Livermore National Laboratory (LLNL) have achieved fusion ignition in a nuclear reactor, it was announced on Tuesday.

The dream of generating relatively clean, fusion-based power has been pursued for decades. Now, the US Department of Energy and the LLNL believe they are a significant step closer to hitting that goal, confirming earlier reports.

On Tuesday this week, officials presented during a livestreamed broadcast the results of an experiment conducted at the lab's National Ignition Facility (NIF) on December 5.

The boffins said they had produced 3.15 megajoules of fusion energy as output, exceeding the 2.05 megajoules delivered by the 192 lasers that kickstarted the nuclear fusion reaction. In other words, LLNL achieved fusion ignition within a reactor, and (in a way) got more energy out of the reaction than it put in (though more on that later). That's a milestone for the team, and a first-of-its-kind feat, according to the Americans.

You can replay the announcement below.

"The pursuit of fusion ignition in the laboratory is one of the most significant scientific challenges ever tackled by humanity, and achieving it is a triumph of science, engineering, and most of all, people," Kim Budil, director of LLNL, said in a statement.

"Crossing this threshold is the vision that has driven 60 years of dedicated pursuit—a continual process of learning, building, expanding knowledge and capability, and then finding ways to overcome the new challenges that emerged."

Meanwhile, US Secretary of Energy Jennifer Granholm called the results "a landmark achievement," while senators and representatives from Congress also gushed over the "major scientific breakthrough."

The NIF works by firing nearly 200 lasers to form beams of ultraviolet energy at a tiny pellet of fusion fuel held inside a hohlraum. There the energy is converted into X-rays that crush the pellet, causing it to implode. The pea-sized capsule then turns into a super hot, high pressure plasma, providing the right conditions to fuse its atoms of deuterium and tritium fuel.

Where the magic happens ... The hohlraum holding the pellet of fusion fuel, a frozen mix of hydrogen isotopes

This nuclear fusion reaction forms helium nuclei and neutrons in the process. In theory, relatively clean power can be harnessed by – for instance – converting the neutrons' energy into heat to drive a steam turbine and generate electricity. It's not too different from the mechanics of a thermonuclear weapon or star, in which deuterium and tritium fuse under incredible pressures.

Last year, the LLNL said its researchers were close to achieving fusion ignition. This time, however, the team managed to get more energy out than the laser energy used to combust the cryogenic fuel pellet.

"The laser team recently completed an upgrade to enable increasing the delivered energy by eight per cent," Alex Zylstra, a principal experimentalist at LLNL, told The Register.

"We then developed a modified design that uses this extra energy to implode thicker fuel pellets, which leads to increased performance with the fusion output exceeding the laser energy." 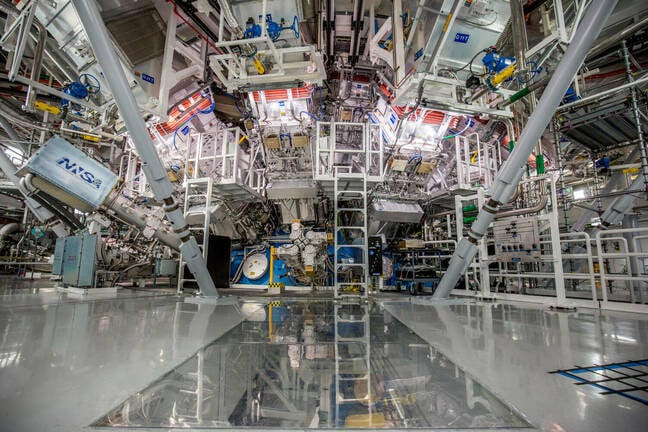 Although the results are worth celebrating, they still show nuclear fusion is very, very far from being a practical source of energy. The initial energy required to fire the laser beams was 322 megajoules, with just over 2 megajoules delivered to the fuel capsule to trigger its implosion.

Comparing this with the 3.15 megajoules, or 875 Watt-hours, generated in the nuclear reaction, the overall energy produced by the NIF is still a net loss by quite a factor.

The LLNL NIF, we also note, isn't strictly geared towards clean power generation either, and is instead focused on nuclear weapons simulations.

Zylstra said details of the experiment will be reported in an upcoming paper to be submitted to a journal for peer review. "These results open the door to conducting experiments at conditions never before attainable in the laboratory. By increasing our understanding of these fusion plasmas we will work towards producing even higher fusion output as well as exploring conditions relevant for the nuclear weapons stewardship mission," he told us.

The DoE noted that "many advanced science and technology developments are still needed to achieve simple, affordable [ignition fusion energy] (IFE) to power homes and businesses", and is interested in relaunching a "coordinated IFE program" with the private sector. Zylstra agreed, and said reactors would need to achieve higher energy gains at faster rates in reactors for nuclear fusion energy to be commercially viable in the future. ®

Since humans can't manage fusion, the US puts millions into AI-powered creation

US Dept of Energy set to reveal fusion breakthrough

Updated If Uncle Sam got more power out of a reaction than it put in, it's a new dawn for clean energy
Science13 Dec 2022 | 100

It's more than 20 years since Steps topped the charts. It could be less than that for STEP's first fusion energy

Anyone fancy a spherical tokamak in their backyard?
Science26 Jan 2022 | 70

When it comes to smashing atoms, things are really starting to heat up
Science14 Mar 2022 | 8