Putin it into operation will take a while at this rate

The debut of Bill Gates' advanced nuclear power plant will be delayed for at least two years because the only company that makes its fuel in sufficient quantities to make it work is located in Russia.

The 345MWe Gates-backed TerraPower Natrium plant, planned for construction at a soon-to-be decommissioned coal plant in Kemmerer, Wyoming, can still be built. But its planned 2028 commissioning has now slipped to 2030 at the earliest, a spokesperson told the Casper Star-Tribune on Tuesday.

"We had a plan. It was a very aggressive timeline; we felt pretty confident that we could meet it. But it was all predicated on having our first coreload of fuel come from Russia," said Jeff Navin, TerraPower's Director of External Affairs.

But with Russia currently a pariah nation subject to sanctions, the chances of getting fuel from Moscow is slim.

The fuel in question, which is essential to the Natrium, is called high-assay low-enriched uranium (HALEU), and is enriched up to 20 percent. The fuel in today's nuclear fission power plants is typically enriched by much less, usually no more than five percent uranium-235.

While the TerraPower Natrium reactor won't be able to fire up until America can resolve its dependency on Russia for HALEU fuel, Navin told the newspaper construction timelines remain unchanged, and the company would still break ground on the reactor next year.

HALEU? Yes, this is DoE

The United States Department of Energy (DoE) describes HALEU as crucial material in developing and deploying a new generation of nuclear reactors in the US because it allows for the construction of smaller reactors. HALEU reactors also have a longer operational cycle and are more efficient than predecessor technologies. 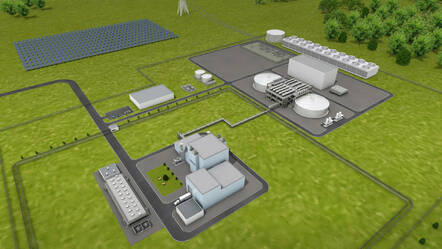 How the Natrium nuclear power plant is expected to look ... Source: TerraPower

Such reactors, in turn, could serve as a bridge between fossil fuels and renewable energy sources. Unfortunately, there's only one company in the US that can make HALEU – American Centrifuge Operating, LLC (ACO) — and despite $150 million in DoE investments last month, the company is still years away from production at scale.

The DoE's own projections indicate more than 40 metric tons of HALEU will be needed before the end of the decade, but ACO is a long way short of that goal: the biz plans to demonstrate its capabilities by producing 20 kilograms of HALEU in 2023.

After that, the DoE said ACO would produce 900 kilograms per year. At that rate it would take more than 40 years to produce the amount of fuel the DoE said is needed this decade, though the department said it's pursuing multiple paths to produce the HALEU the US nuclear industry needs.

Frankly, for a country that came up with the Manhattan Project in the 1940s, this shouldn't be impossible.

In the meantime, TerraPower expressed hope the US government would recycle highly enriched, weapons-grade uranium downblended from nuclear warheads. According to Navin, the Feds "don't have the capacity to disassemble a large volume of warheads any faster than they're already disassembling them," and as such won't be able to meet the reactor's energy needs.

What happened to Bill's original design?

TerraPower was founded in 2006 by Bill Gates, and those who've followed the biz's travails may be aware the company once touted a device called a traveling-wave reactor (TWR). Such reactors would allegedly be able to produce energy for decades with minimal maintenance, and with fuel mostly composed of candle-like stacks of depleted uranium "burned" by an enriched uranium cap.

TerraPower said in 2013 that it believed it would have a demo TWR by 2022. That hasn't happened.

TerraPower's patented Natrium design – due to be built in Wyoming – is a sodium fast reactor with an integrated molten salt energy storage system. It is one alternative to TWRs. The Natrium design's storage capacity allows the plant to boost its output from 345MW to 500MW to serve peak demand.

Aside from those details, TerraPower's reactor appears similar to other small modular reactor designs that ditch water cooling for heavier compounds like salt. TerraPower's website now describes the TWR as "an important, long-term goal of the Natrium program."

Regardless of design, the necessary fuel simply isn't there, and Wyoming Senator John Barrasso (R) said TerraPower's delay is a sign that "instead of relying on our adversaries like Russia for uranium, the United States must produce its own supply of nuclear fuel."

Barrasso introduced legislation to secure a US-made HALEU supply this past April, which is currently in committee. The senator claims his legislation has been delayed by the DoE, which he said needs to "stop slow-walking this process and start listening to Congress."

Of TerraPower's delay to at least 2030, Barasso said: "The Biden administration must consider and implement every available option to make sure TerraPower's Natrium reactor is fueled with American-made fuel." ®

Miniature nuclear reactors could be the answer to sustainable datacenter growth