All those expensive gadgets the boffins attached to it, they couldn't afford a feather duster?

In a year during which AI started making art and conversation, the question of whether a robot can make you cry with a tweet seems very apt.

NASA's Mars InSight probe might have made the answer to that question "Yes".

As The Register has previously reported, the probe landed in 2018 and has since done sterling work investigating the red planet's interior and geology.

But the probe – which is a lander, not a rover, and therefore does not move – has no facility to shake off dust that has accumulated on its solar panels and savagely reduced their efficiency. That sad fact left the probe without energy to run its full suite of instruments and made communication with Earth tricky.

In early November, NASA warned that the mission had entered its final weeks.

On Tuesday, US time, the lander confirmed it's not long for the world it inhabits.

My power’s really low, so this may be the last image I can send. Don’t worry about me though: my time here has been both productive and serene. If I can keep talking to my mission team, I will – but I’ll be signing off here soon. Thanks for staying with me. pic.twitter.com/wkYKww15kQ

At least NASA didn't drop the news on Christmas.

While the tweet above is sad, there's much to celebrate. The lander worked for much longer than planned and has sent home 6,668 images in addition to plenty of data.

The probably-penultimate image captured by the craft was captured on December 11 and depicts some marks in the Martian soil.

The last, which is in the tweet above, shows "the area in front of the lander using its lander-mounted, Instrument Context Camera (ICC)."

For the sake of context, the lander's first image is below. 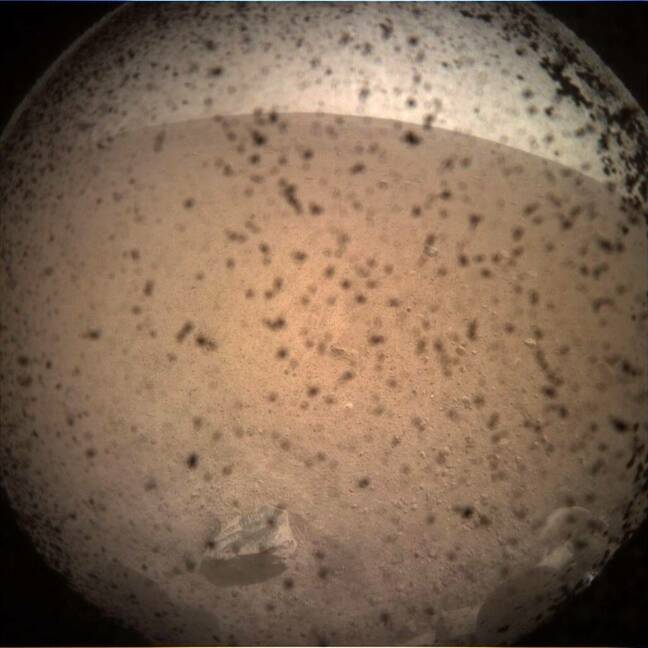 While InSight will soon stop operating, NASA still has other functioning robots on the red planet. the Curiosity and Perseverance rovers are still rolling, while seven operational artificial satellites orbit the world.

At least two future robotic missions are already planned – the ExoMars rover and a sample return mission to scoop up Perseverance's output – and more are on the drawing board.

Some of those far-off missions envisage crews of humans heading to Mars, and some of those may be delivered by Elon Musk's SpaceX. But for that to happen perhaps we need to figure out how to cover Elon in so much dust that he, like Mars InSight, stops tweeting. ®