The latest Linux Mint, version 21, has had its first point release. If you were holding off upgrading from Mint 20, now is a good time. And it's not the only new distro for Yule.

Mint 21 arrived back in August as the Franco-Irish project's take on Ubuntu "Jammy". Way back in the old days, Mint did not take too kindly to version upgrades, but it's got a lot better in recent years, and the last few times that The Reg FOSS desk has tried it, it's gone perfectly smoothly. We took a look at the beta of 21.1 at the start of this month, and now the final version of "Vera" is here.

As usual, there are three editions, and there are three separate release announcements: the flagship Cinnamon 21.1, plus MATE and Xfce 21.1. There are a few known issues in there, so it's worth your time to read them, although in testing we didn't encounter any hitches.

Unfortunately for Xfce fans, this release doesn't include the brand new Xfce 4.18, which was released last Thursday. Mint is based on the LTS releases of Ubuntu so it won't get such major component upgrades. For that, you'll have to wait for Mint 22, some time in mid-to-late 2024 after the release of Ubuntu 24.04. 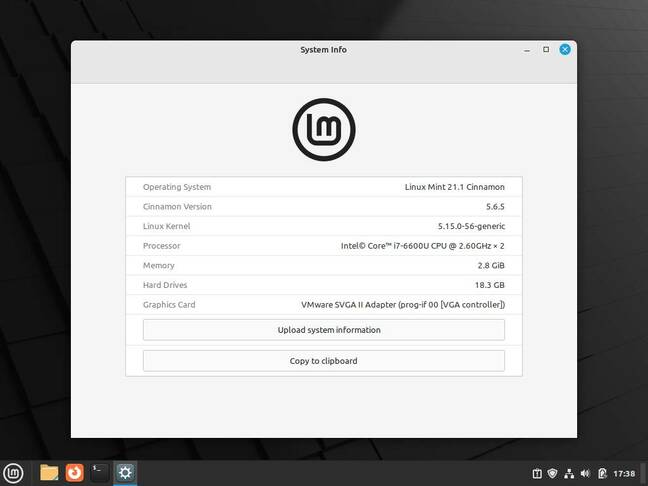 The final Mint 21.1 looks pretty much identical to the beta version, which is the sort of stability its users like

There is also a new release of Arch derivative EndeavourOS, version 22.12 "Cassini". We took a look at the Artemis release back in June.

This version has the new Xfce 4.18, and on UEFI machines it defaults to the systemd-boot boot manager. This is the same one that caused us problems with Pop!_OS this time last year. We advise caution if you're planning to dual-boot Cassini with other OSes on UEFI: systemd-boot needs a much bigger ESP than the more common GRUB bootloader. If you watch for it, though, the Calamares installation program does offer a choice.

EndeavourOS supports a number of Arm devices as well as x86-64 PCs, including the Raspberry Pi and PineBook Pro, as well as less common kit such as the Phytium D2000 and ODROID-N2+.

We gave the PC version a quick test in VirtualBox; the offline install went fine, and it automatically detected the VirtualBox graphics drivers so the display resized with the VM's window. In comparison, Mint 21.1 didn't notice at all, and neither did its driver installer – just as in the beta. On Mint, we needed to manually install the driver package. You can do that on EndeavourOS too, for instance if you want to share folders with the host machine. 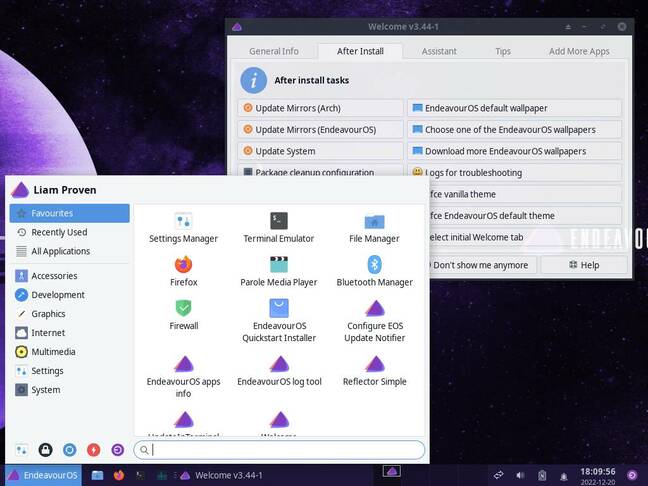 An offline install of EndeavourOS 22.12 will give you the very latest Xfce 4.18

We clicked the button in the Welcome screen telling it to find some local mirror servers then the one to install updates. It told us nothing needed to be done – but oddly, the first time we ran the yay AUR package manager, it found lots and installed them. As we said back in the summer, this isn't an ideal beginner's distro, but overall it's a smooth take on the Arch experience.

There is a new release of postmarketOS too, version 22.12. We described this back in the summer as well, but sadly, The Reg FOSS desk doesn't have any compatible hardware to give it a try. We hope to give it a proper review next year. ®