Woohoo! Cameras on robot's belly confirm it isn't going to drive over it

A titanium tube that looks a bit like a steampunk telescope has been dropped off by the plucky Perseverance rover, stuffed with a Mars rock sample that NASA astrobiologists are hoping might reveal traces of ancient microbial life.

But before the most difficult part – sending spacecraft from Earth to Mars to collect the sealed samples and return them to Earth for analysis by 2033 – the team had to make sure the multibillion-dollar mission didn't shoot itself in the foot by crushing the tube beneath the rover's wheels.

Once they confirmed the tube had dropped, the team positioned the WATSON camera located at the end of Perseverance's 7-foot-long (2-meter-long) robotic arm to peer beneath the rover, checking to be sure that the tube hadn't rolled into the path of the rover's wheels.

Not a bad idea.

Engineers working on the rover also wanted to make sure the sample wouldn't land standing on its end with the tube perpendicular to the surface. The space agency's Jet Propulsion Lab confessed that this had occurred just under 5 percent of the time when they tested the drop using Perseverance's "Earthly twin" in JPL's Mars Yard, including a cute gif showing this happening.

The pictures of the current sample show it lying flat on the ground, but if a perpendicular dropoff does happen to a subsequent tube, JPL said it had written a series of commands directing Perseverance to carefully knock the tube over using part of the turret at the end of its robotic arm. 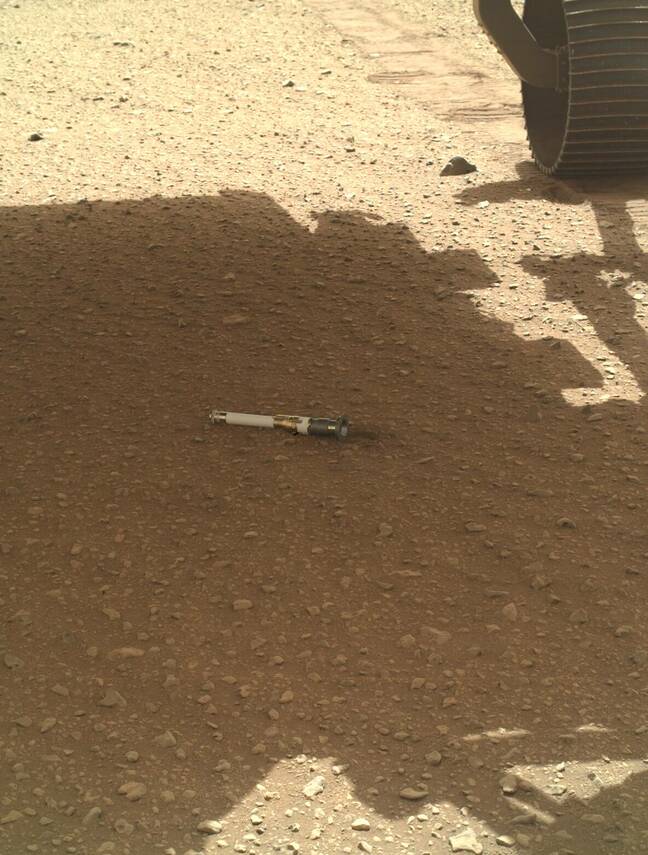 Colder than it looks: NASA’s Perseverance rover deposits a sample tube in the shadow of the robot vehicle

Over the next two months, the rover will deposit a total of 10 tubes at the location, called "Three Forks," humanity's first sample depot on another planet.

The tubes are just backups, however. Perseverance will also keep duplicate samples in its belly. The titanium tube samples being deposited on the surface are there in case the little rover doesn't make its 2028 date with the future robotic lander. That lander's job will be to take the samples and use its robotic arm to place them in a containment capsule aboard a small rocket that would then blast off to Mars orbit. If Perseverance can't deliver its samples, a pair of Sample Recovery Helicopters will have to go pick the backup samples up, and then go back to the lander to be placed into the rocket-mounted capsule.

Once the capsule is in orbit, the plan is for another spacecraft to capture the sample container and return it safely to Earth. The specimens of rock and gas will supposedly return to Earth sometime in the 2030s (more on that here).

The first sample to drop was a core of igneous rock about the size of a stick of chalk. The team said Perseverance's Sampling and Caching System took almost an hour to retrieve the metal tube from inside the rover's belly, "view it one last time with its internal CacheCam, and drop the sample roughly 3 feet (89cm) onto a carefully selected patch of Martian surface."

Among the samples ultimately arriving back on Earth will be exciting specimens "deposited under conditions where life could potentially have thrived" which the rover picked up while trundling around an ancient area of wetland that formed when a Martian river emptied water and sediment into a lake.

The agency said at the time that the geologic diversity of samples already carried in the rover was good, and said the team expected to be dropping off a few select tubes near the base of the delta in "about two months," meaning this is right on schedule. The rover will keep exploring after the dropoff.

Besides its role as a robot astrobiologist, Perseverance's mission is also to "characterize the planet's geology and past climate and pave the way for human exploration of the Red Planet." ®