As the end of the year and the holiday season both approach, so do new previews of both SUSE's new enterprise Linux distro, ALP, and the NetBSD OS.

Now, the second prototype is here, and it's codenamed "Punta Baretti". (Like "Les Droites", the original of the codename is a mountain in the Alps.)

This version has a new installation program, based on SUSE's YAST D-Installer project. This splits the installation program into separate layers which communicate over D-bus, so that same installater can be controlled by a local GUI, or a command line, or another machine over the network, or even by the Cockpit web management system.

There's more information about D-Installer on the project's home on Github. Courtesy of a customized version of LUKS2, the new installer can install onto bare metal with full disk encryption, unlocking the disk with a key from the TPM chip – similarly to the system we described when talking about the new Unified Kernel Image system a few months ago.

Various other tools and components are now available to ALP as containerized workloads, which can be installed and run locally using podman. This includes both text-based and graphical versions of SUSE's YAST system-administration tool, the aforementioned Cockpit, firewalld, and Warewulf for managing HPC clusters.

The improved support for Cockpit is interesting. SUSE acknowledges that there are two sorts of roles for enterprise Linux boxes: one is the devops model, which famously treats servers as cattle. For managing fleets, maybe of thousands, of such boxes, the company offers SUSE Manager, which is based on the FOSS Uyuni project. However, it also recognizes that some servers are handled like "pets" instead, and Cockpit is for this one-to-one style of systems management.

ISO and QCOW images of "Punta Baretti" are available for download on the openSUSE downloads site, for both x86-64 and Aarch-64 bare-metal and virtual machines. There's also a directory of workloads for the new OS. SUSE takes documentation seriously, too, and while the manuals for ALP are themselves still at prototype stage, there is already some helpful info available.

Of course there is more to FOSS Unix-like OSes than Linux, and a beta version of the next major release of NetBSD is also out. 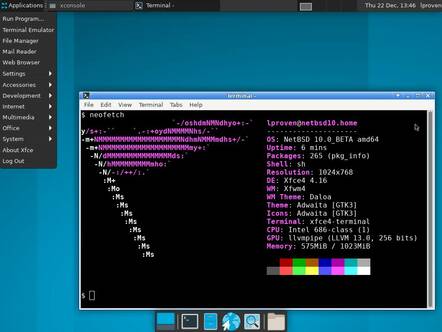 NetBSD 10 is shaping up well, and it only took a few commands to get Xfce 4.16 installed and working.

We took a look at the latest new NetBSD release, 9.3, earlier this year. It is already a very mature project, so although this release has been in development for about three years, the transition from 9.x to 10.x won't be as dramatic as it was for, say, Apple's Mac OS X family.

When it's finished, NetBSD 10 should be significantly faster than previous releases. Significant effort has gone into its multiprocessor support on both the x86 and Alpha architectures. Yes, the Alpha that DEC cancelled late in the 1990s and which ended up in Intel's hands.

This is the sort of place where NetBSD shines: it's a modern OS that can viably be run on old hardware that is still perfectly useful, but which has long been abandoned by its manufacturers. So, for instance, if you are still running some Alpha machines, perhaps on on the end-of-life OpenVMS 8.4, which it's probably safest to keep off the public internet in 2022, you could run NetBSD on a few of them to move things on and off the modern Internet. Obviously, yes, it might be easier to run it on x86-64, but with NetBSD, you can have the exact same OS on a modern PC and on a 20th century Alpha box, which makes maintaining them rather easier.

NetBSD 10 also has improved cryptography, with support for Wireguard, and improvements in disk encryption both for filesystems and swap partitions, which will be accelerated by CPU functions where these are available. There's improved Arm architecture support, including more recent models; the announcement calls out "including Rockchip RK356X, NXP i.MX 8M, Amlogic G12, Apple M1, and Raspberry Pi 4". Support for various models of multi-gigabit Ethernet is coming, and version 10 will support DTrace on MIPS processor machines.

We gave the beta version a very quick trial inside VirtualBox, using the x86-64 ISO image, and it proved very similar to the installation process that we described for version 9.3, up to and including needing to run sysinst a second time post-install in order to be able to install packages directly from the internet. If you're willing to try it and report any issues to the development team, the beta looks very promising. ®