Despite its name and looks, this is quite the radical departure for a Linux distro

The first release of Vanilla OS is based on Ubuntu 22.10, but a slightly different desktop conceals much more dramatic changes under the hood.

22.10 Kinetic is the first stable release from the Vanilla OS project, and as its version number suggests, its parent distro is Ubuntu 22.10 "Kinetic Kudu", which appeared in October. However, Vanilla OS is very much not just another Ubuntu remix. While it is based on Ubuntu and has a degree of compatibility with it, Vanilla OS is an ambitious distro. It changes the way the operating system is built, maintained and used in profound ways.

Although the underlying Linux is Ubuntu, it doesn't look much like Ubuntu or feel like it either. Down at the bottom, the project's website modestly says:

Vanilla OS is made possible by the following technologies.

The first two parts are clear enough. GNOME is GNOME, but Vanilla OS uses the latest GNOME 43, removing the various Ubuntu customizations and add-ons. This is one of the few places that Vanilla OS is in any way "vanilla": you get plain, unmodified upstream GNOME, which means that at first glance the distro looks more like Fedora than it does like Ubuntu. There's no Yaru theme, no permanently visible vertical dock, no vertical workspace switcher. If you like GNOME, it's fine. If you don't, and would prefer something else, tough – GNOME is the only desktop on offer.

After that, things start to diverge. We took a look at Distrobox last year: it's a tool for creating Linux distro containers so that you can install and run apps from almost any distro on almost any other. VanillaOS integrates Distrobox into the OS so you can install packages from Ubuntu, or Fedora, or Arch Linux, directly into the same OS. Notably, because it uses containers, Distrobox enables the normal style of app installation and updates even on immutable distros such as Fedora's Kinoite spin. 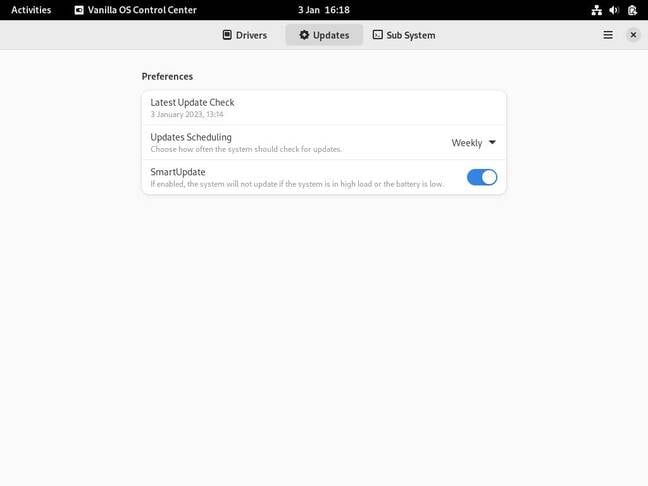 A visible sign of how Vanilla OS is not like other Ubuntus is the new Control Center app, a central place for driver and update handling

As well as this, Vanilla OS also supports all three of the big-name cross-distro packaging systems: Snap, Flatpak, and AppImage. So you should be able to run pretty much any app from any distro on VanillaOS.

If you are a regular distro-hopper, this may sound like paradise. We are a little less convinced. There's a lot of overlap between these pools of software so while it may enable you to install newer versions more easily, it seems like a lot of work to enable not that much more software.

This package-agnosticism has a price, which is a new package management tool called Apx and pronounced "apex". By default, there's no apt command nor dnf or anything else. They're all replaced by apx. We found Apx to be very easy to use, but as the apps run inside containers, although we could easily install, for example, the Ubuntu "Software & Updates" program, it didn't work. So Apx does mean that familiar Ubuntu methods and techniques don't come across. You will have to do some relearning.

Exploring the OS, we found that we should have been using the Vanilla OS Control Center to install updates, add drivers, and so on. There's also a command-line tool for this called vso. This is what we mean by relearning: not only will knowledge of other distros not help you, it may actively hinder you.

The final tool listed under Technologies is ABRoot. Rather than trying to provide full installation rollback, as found in openSUSE, GeckoLinux and SpiralLinux, Vanilla OS implements a simpler but possibly more robust system. In the mold of ChromeOS, it has two root partitions. Normally, the active root partition is marked as read-only: this is an immutable distro. When you install updates or drivers, the OS updates the other root partition, then reboots into it. If anything goes wrong, it fails over automatically to the previous, known-good system. 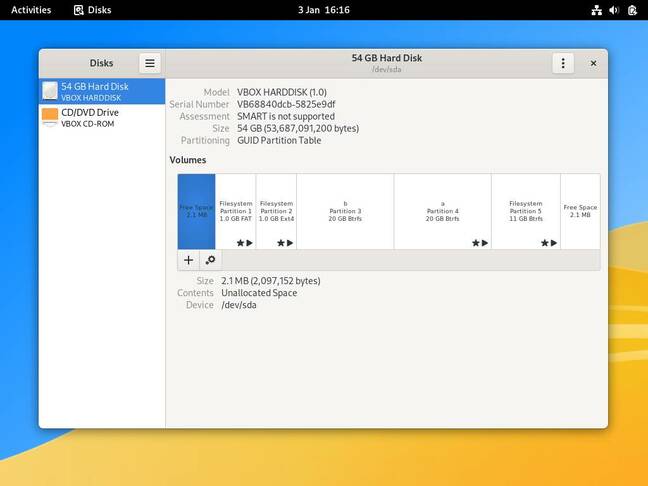 The result is a fairly complex disk layout, with an EFI system partition, an ext4 /boot partition, two Btrfs root partitions, plus a Btrfs /home partition. It's nearly as complex as the layout used in Linux Deepin.

But saying that, this kind of partitioning scheme is working well for something like a third of a billion ChromeBook users these days, and maybe as many Deepin and Kylin users in China, so if the Vanilla OS team can get this working stably, it will be an important step forward. We do note, though, that in the release announcement on their blog, the "Automatic" of automatic updates is struck through. The project has a detailed roadmap of its future plans, which reveals that ABRoot has replaced a tool called Almost. Perhaps the full implementation is yet to come.

If we were feeling uncharitable, we could say that the end result is highly buzzword-compliant: immutability, containerized apps, cross-distro package support, Btrfs, GNOME and so on. But we genuinely are not: this is a bold and innovative effort, and although we found ourselves a little lost trying to find our way around, the distro installed and worked fine – even if it did need a lot of reboots. For a version 1.0 product, it's impressive, and this distro offers some unique selling points.

Instead, Vanilla OS is going for bigger, bolder improvement to the Linux desktop as a whole. It's trying to innovate in the areas of widening the choice of applications, making the system more robust, especially by making updating safer, more fault-tolerant, and in time automatic. If the team can pull all this off, it could prove transformative to the Linux industry in general. It isn't quite there yet, but it's looking good for a first release. ®