Linux distros come and go all the time, which tends to imply that anything that continues for years has something going for it. Calculate Linux isn't well known in the West but this is the 13th major release.

Calculate Linux 23 appeared just three days before the end of last year so its version number – which indicates the year of release – is not completely accurate, but it's close enough for government work. Calculate is a whole family of related distros that has been around since 2007.

The product family is quite complex, with abbreviations denoting each variant. There are three editions: Desktop (CLD), Directory Server (CDS), and "Scratch". The last of these is a minimal version for the user to configure as they wish, and comes in both Desktop (CLS) and Server (CSS) version.

The Reg FOSS desk was already getting confused by the abbreviations, but we have barely begun. The Desktop flavor comes in five variants: the original KDE (CLD), Cinnamon (CLDC), LXQt (CLDL), MATE (CLDM) and Xfce (CLDX). In addition, there's a new tool, the Calculate Container Manager, which has its own abbreviation (CCM) but doesn't seem to have its own product page on the company's website. 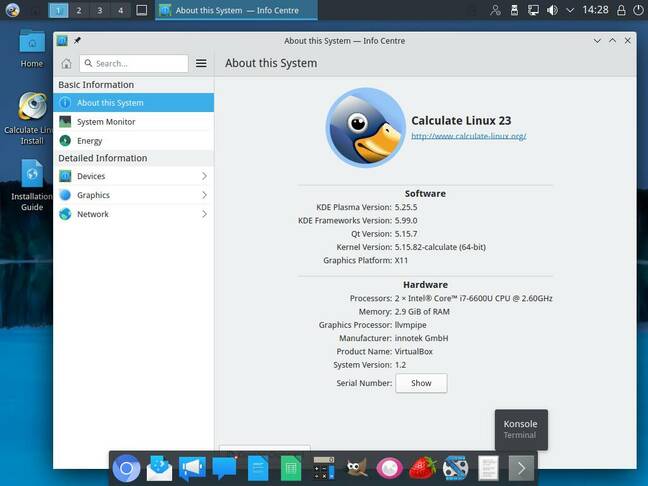 All editions have the same desktop layout, with a GNOME 2-like panel at the top with a start menu, virtual desktop switcher and status icons, and a central dock at the bottom. This is a nice touch, which some other distros could usefully emulate. We tried the KDE and Xfce live media, and while the panel layout matches across desktops, the graphical themes do not.

The installation program is quite complex and glitchy, and we weren't able to complete it and install the desktop edition. For example, although the main screen shows two password entry boxes, that isn't where you enter passwords: a separate dialog box opens up. This enforces password limits: minimum eight characters, one capital, one special character, and so on. However, nothing we entered worked. Although the dialog box accepted the password, the installer then returned to the main screen, showed just three bullet points for the password length, and rejected it. We were also a little surprised to see that automatic disk partitioning wanted 32-33GB, and created a dedicated volume for /var/calculate. The default filesystem is Btrfs. 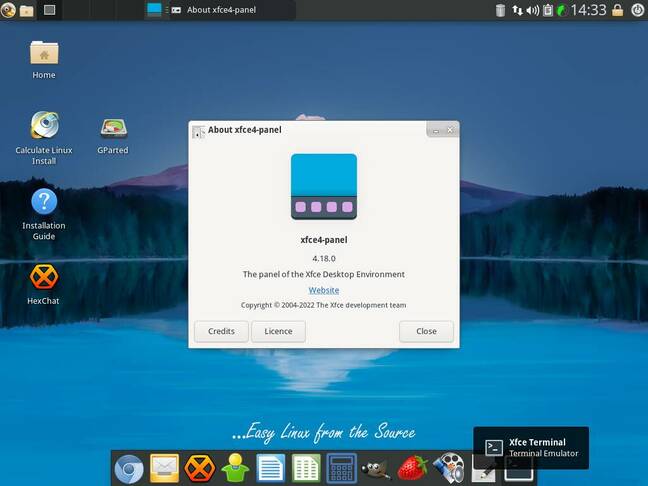 The Xfce edition of Calculate uses the latest Xfce 4.18, and somewhat KDE-ish theme

Since we couldn't install the distro, there's not much more we can tell you. The live images gave us a faint feeling of turn-of-the-century distros, especially Mandrake Linux. There's a penguin logo on the start button, for instance. The problems with password entry happened in both the KDE and Xfce versions and was repeatable.

The world of Linux in Russia is booming due to Western sanctions after the invasion of Ukraine, and Russian media reports that the Duma's Ministry of Digital Development, Minkomsvyaz, is changing legislation to encourage the development of Linux-based software rather than on Windows. It's possible the problems we had are just teething troubles, perhaps due to choosing to install in English. That might also explain the somewhat confusing set of abbreviations.

Although we weren't able to give it a proper trial, we've noted positive comments about Calculate Linux out there, especially concerning the compatibility of the Directory Server with Windows clients. Merely being based on Gentoo is no bad thing: after all, the most widely used desktop Linux in the world, ChromeOS, is too. ®