CES As we lumber into the new year, corpulent and distended with wallets emptied from the excesses of the festive period, we now have CES 2023 to deal with – the tech tat bazaar once known as the Consumer Electronics Show.

Launching today in Las Vegas, the expo once boasted 200,000 attendees but the pandemic hit the event hard, forcing it online in 2021 with only 40,000 tech heads bothering in 2022. This year around 100,000 visitors are expected to poke and prod bleeding-edge products (many of which may never see life beyond prototype) from some 3,000 exhibitors.

So let's have a look at what weirdness you – more than likely feeling some degree of pinch from the global economic situation – are expected to fritter away your hard-earned currency on in 2023.

Oh yes, Taiwanese electronics giant Acer has a little something lined up for you desk jockeys looking that bit more rotund after Christmas and years of on-off lockdowns – a desk integrated with an exercise bike that charges your laptop and devices. 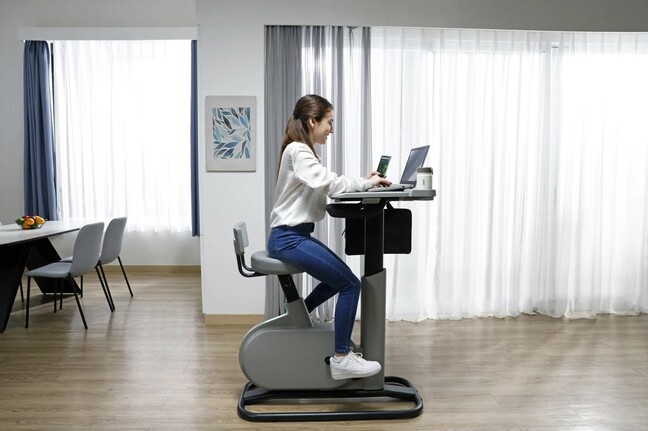 Designed to "empower sustainable and healthier lifestyles," the idea with the eKinekt BD 3 is that you pedal while you work, with constant cycling at 60rpm producing 75W, or so Acer claims. The bike desk also has two USB Type-A ports, one USB Type-C port, a bag hook, and a beverage holder. Whether it's easy to hit the correct keys as you wobble left and right isn't addressed by the company's announcement, yet we suppose the best thing to do would be to hit some cardio between jobs or in downtime (if you get any).

If you're truly on the "new year, new me" track, you could set yourself a challenge by starting work with a 1 percent charge on your laptop, pedaling away to keep the lights on and your boss satisfied. Of course there's also a companion app that monitors riding duration, distance, speed, calories burned and watts generated.

In fairness, it's a nice little idea if you don't mind looking like a total overachieving nerd – so this may be one for homeworking hordes. On that note, we suppose you might shave a few pennies off the electricity bill too. Acer tries to position the eKinekt BD 3 as eco-friendly, as is the trend these days, but we'll draw a veil over such marginal gains.

At least it's not a standing desk. Half an hour doing dishes is enough to make the small of my back burn so I'll be sticking with my cushy Secret Lab chair, thank you very much. For those who perform their job on an overpowered workstation that moonlights as a gaming machine, this desk setup has very little to offer.

The stinger is that the eKinekt BD 3 will set you back $999. It comes out in June.

Gotta spot them all

Now to the world's most expensive bird feeder ($199 for the basic model), which has been shipping since September after a successful crowdfunding campaign cleared Bird Buddy out of its inventory.

This AI-fitted feeder has evidently taken the twitcher world by storm with 22,925 backers. The idea is that our feathered friends come down for a snack where they get papped by the onboard camera, which then sends a notification to your phone via the companion app that streams footage of the bird chowing down. "It's one of those rare notifications that actually make you feel better, not worse!" the company chirps. 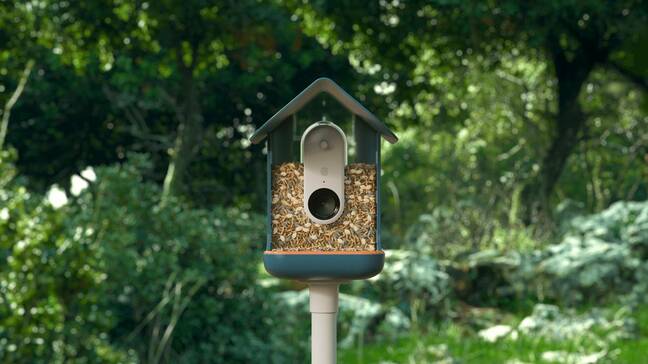 The AI bit comes in with the identification of more than 1,000 species of bird through both visual and audio cues. "We try to kind of gamify the collection so it's a really fun game that you can play – almost like a real life Pokémon Go with real animals and wildlife in your backyard," said Bird Buddy's appropriately named co-founder and chief hardware officer, Kyle Buzzard.

From expensive bird feeders to expensive inline skates – with nary an AI in sight. We reported last year on Shift Robotics whose Moonwalker skates use machine learning algorithms to "adapt to a user's walking gaits," allowing them to "walk at the speed of a run." But Atmos Gear's electric remote-controlled roller blades aren't half as interesting.

Founder Mohammed Soliman was zipping around the show floor, letting journalists have a go on the skates that have a skin-scraping top speed of 25km/h (40 with the BOOST version). "My goal is for everyone to go skating again because it's so much fun, every time you see people skating you see them with a big smile," he said. 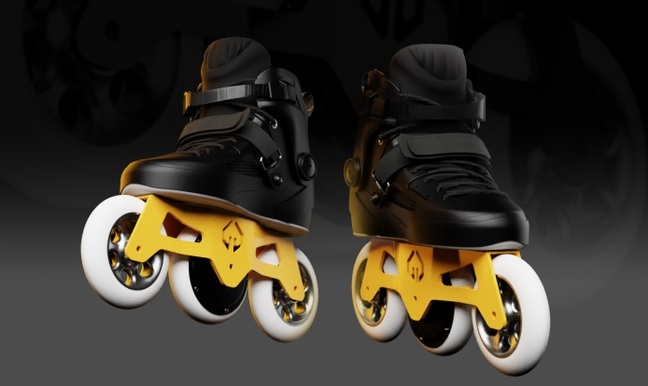 The skates are controlled by a handheld remote and a full one-hour charge is claimed to be good for a 20km range. They can also be used as ordinary skates, which can charge the battery, if desired. The motorized frame is said to be "universal" (as in, it can attach to any skate boot you may already own) and boasts enough torque to climb a 20° slope and support 100kg.

The French startup will ship you a pair for $500 once they've reached 200 pre-orders. They currently stand at 150.

South Korean startup Prinker has been hawking its smartphone-enabled temporary tattoo printer for a couple of years, but that didn't stop it ambushing journalists at CES, including the BBC's Zoe Kleinman, with... well, I'm not sure what that is. An anchor?

This is perfect for poseurs who think tattoos are cool but lack the commitment or pain threshold to actually sit in the chair and get permanently scarred with a cringe design.

You download the Prinker App to your smartphone then choose from thousands of ready-made designs or make your own. Then you use the handheld cosmetic-grade inkjet printer to apply the tattoo. The company claims the image will last for up to two days and is easily removed – a little too easily for one disgruntled Amazon reviewer who claimed "the app is terrible and any prints you do rub off in about 20 mins." Hoo, tough crowd. The gadget retails for $229/279.

Remember Smellovision? The original system was supposed to release odors so filmgoers could "smell" what they see on the screen. It was only ever used for one film, Scent of Mystery, in 1960. Otherwise Brits might remember the April Fools' Day prank where the BBC claimed to interview a man who invented Smellovision then "viewers" called in to say they could smell chopped onions and coffee through their TV sets. It also made a return in 1995 with a weird scratch-and-sniff gimmick as part of the Children in Need charity drive.

Another CES exhibitor, OVR Technology, is trying to do Smellovision for the metaverse. The Vermont-based startup wants to bring scent to virtual experiences through an add-on device for VR headsets – so another bulky thing swinging from our faces as we galavant through the still non-existent metaverse. This is done through an odor-filled cartridge that pairs over Bluetooth with gaming systems, mobiles or desktops.

Journalists reported a flower smelling floral, the ocean like lavender, and a waterfall like vanilla. It's early days after all...

With 3,000-plus exhibitors, obviously there was a lot more at CES than this tat – flying cars, AR glasses that can translate conversations in real time, prototype gaming controllers, cyber doctors, hands-free navigation devices – and we simply can't talk about them all. There was also a sense of fatigue coming from talking heads like PP Insight's Paolo Pescatore, who summed it up nicely: "It felt like same old, with no real stand-out tech."

Yet CES is a trade show, and a trade show's purpose is to eventually make its exhibitors money – in this case by touting new products that people at home might want to shell out for.

But Samsung's consumer tech CEO had grim news for the market, with internal forecasts expecting demand to remain low amid high inflation, rising interest rates and a strong dollar. Basically, it's not a good time for CES when people are more focused on feeding their families and paying their bills.

Han Jong-hee told the Wall Street Journal in his first interview since taking the position that he hopes the downturn, which caused Samsung's net profit to fall 24 percent in the third quarter, will improve by the second half of the year.

The technology giant's operating profit for the quarter ended December 31 is forecast to have nearly halved compared to a year ago – and if a company like Samsung is feeling the pain, you can be sure the entire industry is too. ®