Gorilla Glass-plated Android gadget for the biz crowd but it won't be cheap...

CES Lenovo has unveiled the ThinkPhone, an Android smartphone the company is positioning as a business device alongside its ThinkPad laptops, with a number of features designed to make the two devices work better together. 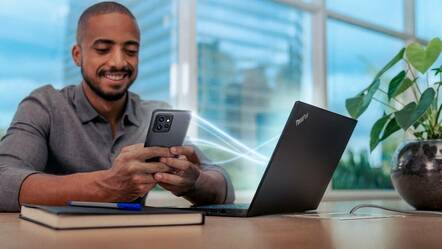 The ThinkPhone is the product of Lenovo's Motorola division, which it acquired back in 2014, but the device has been styled to match the company's familiar ThinkPad laptops and Lenovo is clearly touting it as a companion device for ThinkPad business users. It was announced at the CES show in Las Vegas.

With an eye to those business users, Lenovo says the ThinkPhone comes with "a complete suite of security and support features that deliver seamless protection and full manageability backed by ThinkShield." This includes secure boot and a hardware root of trust, among other capabilities intended to protect users against malware and other attacks.

Lenovo also claims that IT departments can deploy ThinkPhones to their workers with zero-touch provisioning and manage the devices using Moto OEMConfig and Moto Device Manager.

In terms of specifications, the ThinkPhone runs Android 13 and is based on Qualcomm's flagship Snapdragon 8+ Gen 1 mobile chipset with up to 12GB memory, a 6.6in FHD+ display, and weighing in at 188.5g. It has a 50 megapixel rear camera capable of 8K video capture with a 32 megapixel front camera.

The device is a 5G handset, as you would expect, and features Wi-Fi 6E support and Bluetooth 5.2. Lenovo claims that the 5,000mAh battery is good enough for over 36 hours of use, and the phone comes with a 68W charger for rapid recharging and which is said to be also capable of powering a laptop via USB-C.

According to Lenovo, the ThinkPhone is a rugged device thanks to a lightweight aramid fiber that's "stronger than steel," aircraft-grade aluminium frame and Gorilla Glass Victus protecting the screen. It is also IP68 certified against dust and water getting in.

Motorola president and Lenovo senior vice-president Sergio Buniac said the ThinkPhone was a device that "truly embodies the trusted quality and purposeful design of the ThinkPad while also bringing unique productivity tools, and industry-leading security and device management capabilities."

For integration with a ThinkPad, Lenovo provides a feature it refers to as Think 2 Think, which appears to be powered by an existing capability called Ready For. This enables phone and laptop to discover each over a Wi-Fi connection, after which the user can drag and drop files between the two devices, as well as copy and paste.

However, welcome as these features are, many of these are already offered by Microsoft via its Link to Windows app for Android phones that connects with PCs running Windows 10 or 11.

In fact, Motorola said it has worked with partners like Microsoft to offer the best productivity experiences for users, which means that the ThinkPhone comes with Microsoft 365, Outlook, and Teams mobile apps ready preloaded.

Motorola also said it is working with Microsoft on additional capabilities such as push-to-talk support for the Walkie Talkie app in Microsoft Teams, and even support for streaming a Windows desktop directly to a ThinkPhone device.

Muscling in on Samsung and Apple's iPhone

But does Lenovo have any prospect of appealing to the business market with its Think-branded phone?

"The business smartphone market (those bought by business for employees) is pretty small – about 10 percent of the total market – and it is dominated by iPhone and Samsung, as the phones are used for both business and pleasure," said Gartner research director Ranjit Atwal.

"A business only phone would need compelling features in security, integration and compatibility to become the new choice."

CCS Insight chief analyst Ben Wood said he expected that Lenovo will aim to sell the ThinkPhone through the same enterprise and IT channels it uses for its ThinkPad laptops.

"The phone offers a high spec with the latest Qualcomm processor so it will be in the premium part of Lenovo's smartphone range which will sit well with the ThinkPad portfolio," he said. 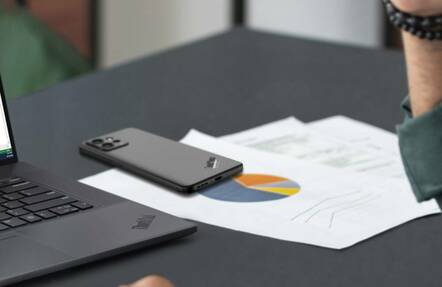 However, Wood said it would be critical for Lenovo to commit to software updates and security patches, given its target market.

"Enterprises and small business users expect to keep devices for longer than many consumers. Given some rivals are already offering four or five year commitments with similar products the expectation will be that Lenovo matches this," he said.

The ThinkPhone will be available in the US, Europe, Latin America, Middle East, Australia and some Asian countries "in the coming months," Lenovo stated.

Pricing for the device has not been disclosed, but Wood told us that given the specifications, it will not be cheap. "I'd anticipate that Lenovo will offer some financing or leasing programs through some of its channels for this device in the same way packages are put together for laptops and other enterprise grade devices." ®