Where you want to be for the latest and greatest, but not for the faint of heart

The latest release of siduction – a Debian "sid" based meta-distro – sneaked in before the end of the year, but while it dropped some features, it gained some important new ones too.

As we mentioned when introducing Rolling Rhino, siduction is the best-known rolling release derivative of Debian. If it's not obvious, the name is a pun on "sid", the codename of Debian's unstable development branch, and the word "seduction" – which possibly reflects the seductive lure of always running the latest and greatest, where the price you pay is a lack of stability.

The 2022.1 release is codenamed "Masters of War", continuing our theme of the Ukrainian conflict from Calculate Linux. Version 2022.1 appeared on December 19 (the same day as Calculate Linux 23), and is the first release since December 2021. That year's three point releases came after a three-year gap.

Like Debian itself, the project seems to be somewhat short-staffed, and with this version, it drops the GNOME, Cinnamon and MATE desktops from the standard offerings, although non-production-ready test builds do remain. The desktop choices are KDE Plasma 5.26.4, Xfce 4.18 or LXQt 1.2.0. 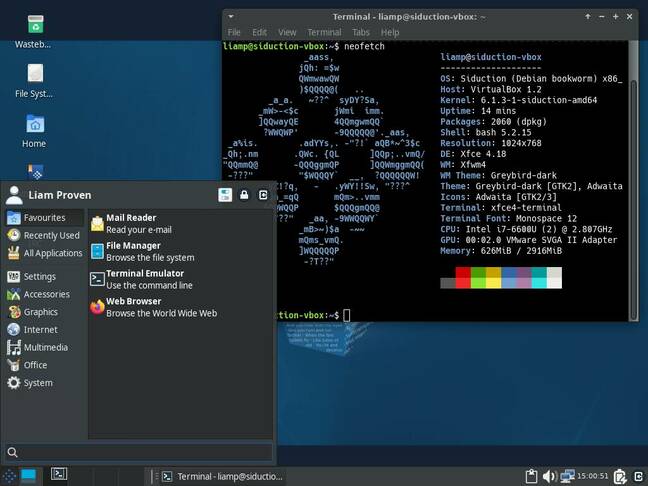 The new version defaults to Btrfs and integrates openSUSE's Snapper tool for rollback, something the Debian world only previously saw in last year's new Spiral Linux distro. That's an important addition to a rolling release distro: being based on an unstable development branch means that its component packages haven't been thoroughly tested yet. Sometimes, updates will break things. If you don't have rollback support, all you can do is keep updating and hope that whatever was broken gets fixed soon. If the breakage is so severe that you can't boot, you're stuck: it's reinstall time.

The addition of Snapper means that you can reboot and just roll back to the state of the system before the most recent update. Then, with things (hopefully) working again, you can either try to fix the problem, or just wait a day or two and then try to update again. As such, this is a very beneficial and desirable addition, and the release notes even point to the explanation on SpiralLinux's Github page. This may cause some concern to SpiralLinux's maintainer, but since that distro focuses on the Debian stable channel, there's still competitive differentiation there.

siduction 2022.1 also uses the shiny new kernel 6.1, the improved Nala package manager used in Zinc and which bypasses Canonical's controversial adverts in apt. It includes non-free drivers as standard too so it should install on more machines than vanilla Debian. Another very convenient addition is that the live medium includes an automated chroot tool: it will try to find your installed OS and open a terminal window which is already logged into that installation. A chroot shell is a very handy troubleshooting tool, and the automation makes it even more convenient.

Saying that, you will probably need those rescue tools. Basically, siduction is a slightly refined and more current Debian, but running "sid" is not for beginners or the fainthearted. The unstable channel is what it says on the tin: sometimes it will go wrong. If you know what you're doing, you like the Debian family, and you want the bleeding-edge versions to be had from "sid", then siduction makes that easy, and adds some valuable extra features too. Saying that, if you want snapshot support but don't need the very latest versions of everything, you would probably be better off with SpiralLinux and its Debian stable-channel base. ®