LHS 475 b same size as Earth, rocky, but hotter, and so close to its star it orbits in 2 days

NASA's James Webb Space Telescope has confirmed its first exoplanet: a rocky, hot world with a diameter 99 percent the size of Earth that completes an orbit around its star in just two days.

Star LHS 475 is a red dwarf around 41 light years away and was chosen as a target when a transiting survey identified signs of a potential planet in the system, NASA said. Using Webb's Near-Infrared Spectrograph (NIRSpec), astronomers were able to get clear observations of the planet, dubbed LHS 475 b, in just two transits across its star.

"Webb is bringing us closer and closer to a new understanding of Earth-like worlds outside our solar system, and the mission is only just getting started," Clampin said.

Whether there's life, or habitable conditions, on planet b is far from clear, though. LHS 475 b is closer to its star than any planet in our solar system, and observations point to its surface temperature being a few hundred degrees warmer than Earth.

In addition, NASA said that although Webb is the only operational telescope capable of characterizing the atmosphere of Earth-sized exoplanets, this particular pass didn't yield definitive results. It did help the team rule a few possibilities out, however.

Johns Hopkins University Applied Physics Laboratory researcher Jacob Lustig-Yaeger, one half of the project leadership team along with staff astronomer Kevin Stevenson, said it definitely doesn't have a methane-rich atmosphere like Saturn's moon Titan. Beyond that, things are unclear.

Based on the transmission spectrum data the team has, 475 b could have no atmosphere at all, or it could have one of pure carbon dioxide, which is hard to detect due to its compact nature, Lustig-Yaeger said. 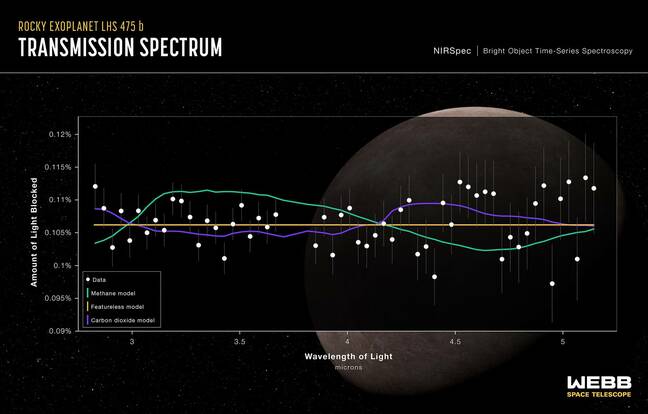 Red dwarfs: Not just for mining

Red dwarf stars are some of the smallest, oldest, coolest and most plentiful stars in the galaxy. They're also one of the easiest around which to detect exoplanets, meaning future studies of terrestrial planets could involve searches for habitable worlds in orbit of red dwarfs.

Given a red dwarf's profile, those worlds would need to be quite close, meaning LHS 475's habitable zone is far nearer to it than ours is to the Sun.

Whether astronomers will find an atmosphere around 475 b or other close-orbiting red dwarf planets seems unlikely given the chaotic nature of red dwarf stars, which frequently belch out high-energy radiation and solar flares.

According to a 2020 study of Barnard's Star, a red dwarf only six light years from Earth, the likelihood that a planet's atmosphere survives the onslaught from a red dwarf is negligible.

Red dwarf stars behave differently based on their age, with younger ones far more unpredictable than old ones like Barnard's. An atmosphere burned off by a chaotic young red dwarf could have time to regenerate, NASA said, but observations of Barnard's Star make it apparent that even a regenerated atmosphere has little chance of lasting.

"The onslaught of powerful flares like those reported here, repeatedly occurring over hundreds of millions of years, may erode any regenerated atmospheres on rocky planets in the habitable zone," NASA said.

We already know Webb can take good atmospheric readings. In November, the telescope compiled the first complete chemical profile of an exoplanet, which included signs of photochemical reactions that occur when light hits a planet's atmosphere.

When the team observing 475 b gets another chance to take readings this summer, they hope to better understand the exoplanet's atmosphere. Even if it's a dead, lifeless rock, Webb's first exoplanet discovery is good news seeing how tricky it has been to get decent readings of small, rocky exoplanets akin to Earth.