Still waiting for that Ultra...

The launch comes more than six months after Apple introduced its second-gen M-series processor in the M2 MacBook Air. Apple rolled out the chip to its iPad Pro lineup in October and many had expected Cupertino to unveil the M2 Pro and Max chips alongside updated MacBook Pros back in November, but have been left waiting until now.

The new chips fill out a big chunk of Apple's M2-refresh with the only hold out being the M2 Ultra. That chip isn't expected to launch until later this year alongside a refreshed Mac Studio.

With that said, Apple has ticked all the boxes you would expect for a SoC refresh. The M2 Pro and Max chips benefit from an improved 5nm process, feature a higher 3.5GHz clock speed, and sport more CPU and GPU cores. We'll note that unlike the A16 announced alongside the iPhone 14 Pro last summer, Apple isn't using TSMC's 4nm process for its latest batch of M2 chips and appears instead to be using the foundry operator's older N5P process instead.

As with prior gen M-and A-series chips, Apple has once again employed a big-little core design approach with big performance cores (p-cores) for more intensive workloads and smaller, lower-clocked efficiency cores (e-cores) for running the OS and background tasks. The M2 Pro and Max keep the same number of p-cores as their predecessors but increase the number of e-cores from two to four.

We suspect the entire M2 line up will use four e-cores except for the yet unannounced M2 Ultra, which is expected to mesh at least two M2 Max chiplets together.

M2 Pro is available in two different configurations: a base-model with six p-cores and four e-cores and 16 GPU cores and a full-fat version that bumps the number of p-cores and GPU cores to eight and 19, respectively.

The M2 Max's CPU configuration is identical to that of the higher-specced M2 Pro, but with 30 or 38 GPU cores depending on your configuration. Apple says the GPUs also benefit from a larger L2 cache, but it's not clear how much bigger it actually is.

Given prior GPU scaling in the M1-series, we'd expected to see a neat ramp from 8, 10, 16, 20, and 40 cores across the M2, M2 Pro, and M2 Max. But we don't. It's not unusual for Apple to fuse off a GPU core or two to help differentiate its products or hit more aggressive price targets. For instance, Apple's M2 is available with both 8-core and 10-core GPUs. 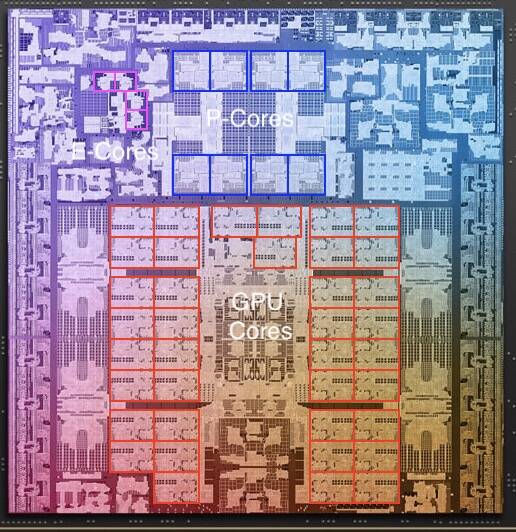 The M2 Max Die with e-cores highlighted in magenta, p-cores in blue, and GPU cores in red - Click to enlarge

Initially we thought the M2 Pro and M2 Max really had 20 and 40 GPU cores respectively and that Apple had just disabled a few of them as part of the binning process. But an inspection of the die shots reveals the M2 Pro has exactly 19 GPU cores, while the M2 Max has 38. So, while a 19-core GPU may sound odd, it was clearly an intentional choice on Apple's part.

For memory, the chips appear to be largely unchanged from last generation. The M2 Pro still maxes out at 32GB of what we assume to be dual-channel LPDDR5 6,400MTps memory that's good for a total of 200GB/s of bandwidth. The bigger difference comes with the M2 Max which can be configured with up to 96GB of LPDDR5. This suggests Apple is using four non-binary 24GB memory modules since the memory bandwidth is unchanged at 400GB/s.

The industrial aluminum and glass enclosures housing these chips remains largely unchanged this time around. Given how recently Apple updated the design of its MacBooks we weren't expecting major changes with this release.

Both the 14-and 16-inch MacBook Pros retain their 120Hz "Liquid Retina XDR" displays — what Apple likes to call its 1,600nit-capable mini-LED display tech. For the record they only really operate at around 500nits of brightness unless you're playing or working with HDR content that can take advantage of all 1,600nits. The chassis is unchanged except for an upgraded HDMI port capable of 8K 60 or 4K 240Hz. Previously the HDMI port was limited to 4K 60Hz.

Finally, Apple claims the greater efficiency of its M2 silicon enables the 16-inch M2 Pro MacBook Pro to hit 22 hours of battery life on a single charge. Of course, that's while streaming from the Apple TV app at half brightness.

Apple also refreshed the venerable Mac Mini which can now be had with either an M2 or M2 Pro SoC. However, those hoping for an updated design will be sorely disappointed to find it's still sporting the same look introduced in 2010. In exchange for an aging chassis Apple has dropped the Mac Mini's starting price by $100 to $599.  But you'll have to shell out at least $1,299 if you want the M2 Pro.

All three Macs are available for order now with shipping starting January 24.