US research agency paying $42.4m for working full-scale aircraft that ejects air out of its surfaces

The X-plane relies on active flow control (AFC), or the use of strategically placed actuators and effectors to alter the flow of air on the aircraft's surface to alter aerodynamic performance. These mechanisms replace traditional rudders, ailerons and flaps. They also reduce drag and weight, generate lift at a high angle of attack and allow for a change in the thickness of the structure.

In return for using AFC technology, designers can build a lighter aircraft with the hopes of reducing cost and improving safety. 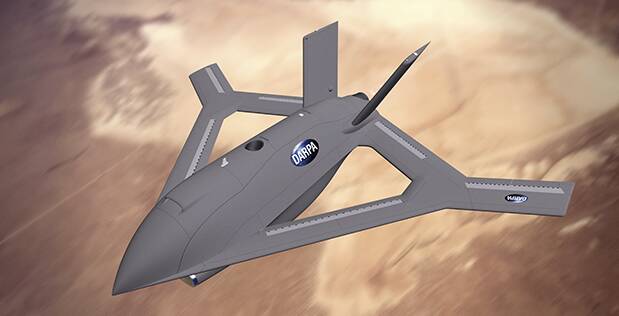 A preliminary design of the plane, complete with a wind tunnel test model, was finished by the company in phase 1. For that phase, Aurora and Boeing engineers spent four weeks gathering 14,000 data points from a quarter-scale model containing 11 movable conventional control surfaces complemented by 14 AFC banks with eight fully independent controllable AFC air supply channels. Over 8,800 of the data points were collected and used to develop the plane's control laws.

Aurora said it then incorporated that test data into a computer model of the vehicle to characterize active flight control performance across the airplane's operational envelope.

For phase 2, Aurora was tasked with creating a more detailed design, complete with flight software and controls. This phase culminates in a critical design review of a full-scale 7,000-pound, 30-foot wingspan demonstration aircraft. In exchange, the Boeing subsidiary pulls in a cool $42.4 million.

An optional third phase sees a built and functioning version of the X-plane that relies on AFC for control in pitch roll and yaw axis tested for speeds up to Mach 0.7. Flight test of that aircraft is slated for 2025.

"Given all that we have learned about AFC and its application to tactical aircraft in prior phases of CRANE, the next step is to prove out these learnings in flight," said company VP Graham Drozeski. He added that the plane was specifically designed to explore AFC tech at scale, with real-world Reynolds and Mach numbers.

DARPA said the aircrafts would have a modular configuration, thus enabling integration of any future tech for flight testing, possibly by the agency or even others.

CRANE's program manager, Richard Wlezien, reckons that as the wing and AFC effectors are modular, the plane could live on as a national test asset long after the program concludes.

This is Wlezien's second go as a program manager for the agency – he was involved in DARPA-funded AFC download reduction on the Bell Boeing V-22.