The report [PDF], presented by FTX debtors to its unsecured creditor committee, said that $1.7 billion in cash, $2.5 billion in crypto, and $300 million in securities had been recovered so far. The discovery of missing funds, FTX confirmed, represents "a substantial shortfall of digital assets at both exchanges."

"We are making important progress in our efforts to maximize recoveries, and it has taken a Herculean investigative effort from our team to uncover this preliminary information," said John Ray III, the CEO and Chief Restructuring Officer at FTX. "We will provide additional information as soon as we are able to do so."

Of the missing funds, FTX said $323 million from FTX.com "was subject to unauthorized third-party transfers post-petition" – which is a corp-speak way of saying someone nicked it – and $90 million was taken from FTX US in the same manner. Two million dollars was also stolen from FTX subsidiary and hedge fund Alameda Research.

Rumors of the stolen crypto started circulating soon after FTX's bankruptcy declaration on November 11 last year – the same day the thief reportedly pulled off the heist. 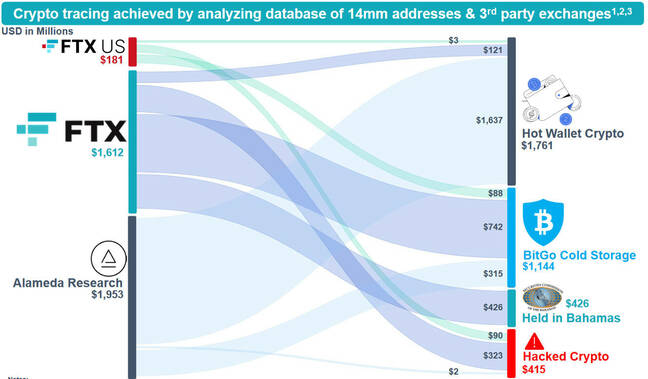 Initial estimates placed the stolen amount closer to $370 million, Bloomberg reported alongside an announcement from the US Department of Justice that said it was investigating the theft in late December.

The saga of FTX starts with Sam Bankman-Fried – or SBF – and his alleged funneling of customer funds to Alameda Research, which was then used to make risky investments and cover subsequent losses.

SBF maintains his innocence on eight charges associated with his alleged mismanagement of FTX amid guilty pleas from FTX CTO and co-founder Gary Wang and Alameda CEO Caroline Ellison.

Now out on parole and subject to house arrest, SBF has a lot of spare time on his hands, some of which he's used to start a Substack. He's only made a couple of posts, asserting his innocence and insisting that FTX's US branch is still solvent and could pay customers.

In the second post, written in response to the FTX debtor report, SBF asserts the document's claims were wrong because they didn't account for $428 million held in FTX bank accounts. All of this is SBF's "best guess," he admits in the post, and Reuters notes the ex-wunderkind hasn't had any access to FTX's internal records since stepping down from the company in November.

We reached out to FTX to find out whether what SBF claimed was anything more than wild speculation. While the company acknowledged receipt of our questions, we didn't get a response. ®