And not even close to mapping it all

Astronomers have mapped over three billion objects shimmering in the Milky Way, providing the most detailed survey of our galaxy yet.

The project involved analysing images captured by the Dark Energy Camera (DECam) instrument on the Víctor M. Blanco 4-meter aperture Telescope at Cerro Tololo Inter-American Observatory in Chile. A team of researchers carefully studied the images from over 21,400 individual exposures over two years to produce the DECaPS2 dataset containing over 10TB of data.

The Milky Way is a giant spinning jumbled mass of gas, dust, and stars held together by gravity and compressed into a pinwheel shape. Although the researchers identified 3.32 billion celestial objects, the DECaPS2 survey only captures a fraction of the spiral galaxy; it covers just 6.5 percent of the night sky as observed from a patch of the southern sky. 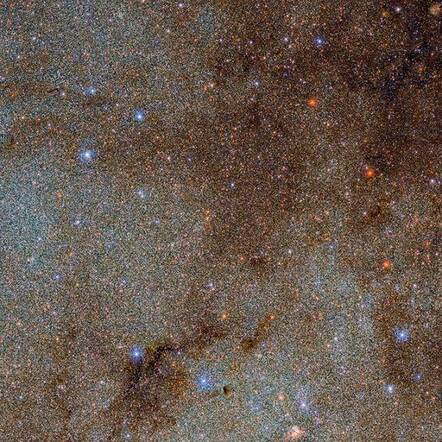 "This is quite a technical feat," Debra Fischer, division director of Astronomical Sciences at the National Science Foundation, who helped fund the project, said in a statement. "Imagine a group photo of over three billion people and every single individual is recognizable. Astronomers will be poring over this detailed portrait of more than three billion stars in the Milky Way for decades to come."

Trying to catalogue objects in the telescope's images is tricky. Stars are obscured by thick clouds of gas and dust, and their positions can overlap with one another. The dark bands of dust that spread across the Milky Way absorb light and drown out the glow from fainter stars. The researchers had to devise new image processing methods to predict the backgrounds behind each star to mitigate the effects of the dust and study areas crammed with stars.

"One of the main reasons for the success of DECaPS2 is that we simply pointed at a region with an extraordinarily high density of stars and were careful about identifying sources that appear nearly on top of each other," said Andrew Saydjari, a PhD student at Harvard University and lead author of a paper published in the Astrophysical Journal this week.

"In the Galactic plane, the complex backgrounds present can significantly contribute to the light you see from stars, and that increases your uncertainty. One of the most important aspects of our work was figuring out exactly how much," he explained to The Register.

When the images from the DECaPS2 survey are combined with ones from Pan-STARRS 1, a northern survey of the sky recorded from a telescope in Hawaii, they form a 360-degree panoramic view of the Milky Way's disk. "With this new survey, we can map the three-dimensional structure of the Milky Way's stars and dust in unprecedented detail," said Edward Schlafly, co-author of the paper and a researcher at the Space Telescope Science Institute.

The DECaPS2 dataset is publicly available. Saydjari hopes astronomers will build upon these findings to explore the galaxy further and study star formation or identify asteroids. ®