My god, it's full of TVs

If you thought 8K was high res, then this supercomputer lab's newly revamped Stallion tiled display system invites you to think bigger — much bigger.

However, this isn't some stadium Jumbotron or theater projection. As you might expect, Stallion isn't one panel, but instead a collection of 18 Samsung 8K QLED TV, with each 65-inch screen arranged in a 6x3 grid measuring roughly 28-feet wide by 8-feet tall. 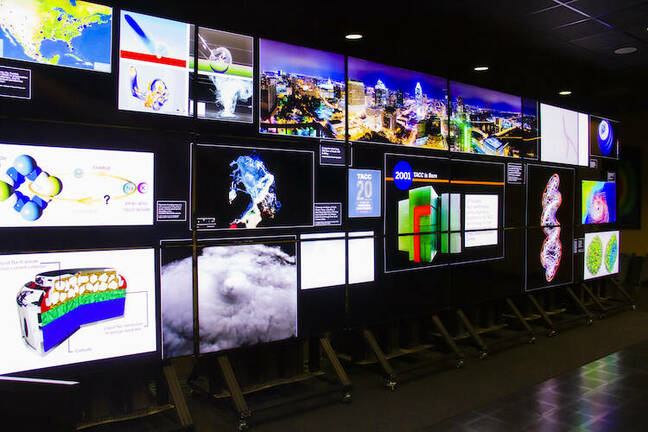 The purpose of Stallion, based at the Texas Advanced Computing Center (TACC), is the visualization of large scientific datasets. In a recent write-up Jo Wozniak, a visualization specialist working on Stallion, explained that the higher resolution and greater brightness will allow boffins to pick out details that otherwise would have been missed without the larger scale.

For instance, one of the first applications of the updated array was by the Cosmic Evolution Early Release Science Survey (CEERS), which used Stallion to visualize data collected by the James Webb Space Telescope. Another application is for high-resolution rendering of models.

According to Paul Navrátil, TACC's director of strategic technologies, the decision to use 8K panels was essentially a future-proofing measure. The upgrades come "at the beginning of a technology curve in 8K televisions, which will allow us to maintain a solid technological basis."

It probably doesn't hurt that 8K TVs have gotten considerably less expensive in recent years. A quick search of BestBuy reveals models as low as $1,299, though it's not clear which model of Samsung television TACC is using in Stallion.

In some ways the latest iteration of Stallion is actually less complicated than in the past. The first generation of the array used 80, 30-inch monitors in a 16 wide by five wide configuration. But despite using more monitors, it offered less resolution — 328 megapixels versus 597 — and was hardwired in such a way that meant it could only be used as a single monolithic display.

By comparison, the updated array is divided into six individually addressable columns, three monitors tall. These can be combined into a single large panel, or broken out into smaller clusters, allowing for multiple data sources to be displayed simultaneously.

While the 18 high-res displays may be the star of the show, running data visualizations at these resolutions requires a considerable amount of computational horsepower.

Stallion is powered by a cluster of 36, hexacore Sandy Bridge CPUs each with a matching Nvidia Quadro K5000 GPU for a total 232 processor cores, 19TB of disk storage, 1.28TB of memory, and 74 gigabytes of GPU memory.

Visualized data rendered by the cluster are then distributed across the displays using software developed by TACC's visualization team called DisplayCluster and MostPixelsEver: Cluster Edition. ®