South Korean memory maker SK hynix announced today it has delivered samples of what it claims is the world's fastest mobile DRAM, and expressed its belief it will eventually be used in more applications.

The Low Power Double Data Rate 5 Turbo, or LPDDR5T, is 13 percent faster than the LPDDR5X the chip shop revealed last November – thus the word "turbo" appended to its name. The turbo version tops out at 9.6Gbit/sec on a 10nm process, compared to the previous iteration's 8.5Gbps on a 12nm process. 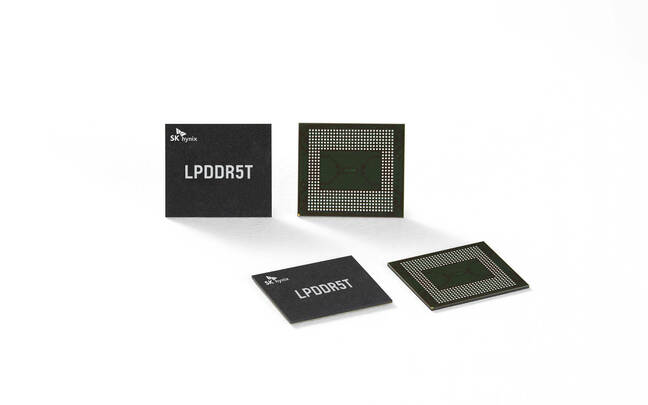 According to SK hynix's canned statement, a 16GB multi-chip package – such as those given out as samples – can process 77GB of data per second, or 15 full-HD movies in one second. Somewhat fewer if any of them are Avatar.

Following JEDEC guidelines, LPDDR5T operates between 1.01 and 1.12V, living up to expectations of being both speedy and requiring impressively little energy to operate.

Like its predecessor, the DRAM product was processed using High-K Metal Gate (HKMG), which is meant to prevent current leakage and improve capacitance. SK hynix is the first memory maker to use the process in a mobile product.

SK hynix plans to begin mass production of the product using its advanced 10nm process – called 1anm – in the second half of 2023. Its marketing for the product implies hopes that it will eventually move from mobile devices to other workloads – at least until LPDDR56 dedicated to those tasks emerges.

"The IT industry forecasts an increasing demand for memory chips with advanced specifications as the 5G smartphone market expands further. In this trend, SK hynix expects the application of LPDDR5T to expand beyond smartphones to artificial intelligence (AI), machine learning and augmented/virtual reality (AR/VR)," explained a spokesperson.

Samsung said its LPDDR5X with its 8.5Gbit/sec speed, released last November, is also suitable for AI and even automobiles. Micron released samples of its LPDDR5X, also 8.5Gbit/sec, around the same time.

SK hynix experienced profit nosedive at the end of 2022 as it awaited the debut of 238-layer NAND Flash products that are expected to turn things around sometime this year. With not one but two new products out since its disastrous Q3 earnings call, the announcement of 238-layer products could turn the profitability tide. ®