Experts have calculated that "severe technical difficulties" in Iran's nuclear programme mean it's eight years away from an operational nuclear weapon, the Telegraph reports.

President Mahmoud Ahmadinejad declared on 9 April that the country had commenced enrichment of uranium on an "industrial scale", but scientists call this "misleading" and estimate it could take Iran four years just to produce enough weapons-grade product for a single nuke.

Norman Dombey, emeritus professor of theoretical physics at Sussex University, explained: "It's very difficult to enrich uranium. It calls for several different scientific and engineering disciplines. Iran hasn't yet shown that it has mastered the problem."

Specifically, Dombey says it could take the Islamic Republic two years to "master the process" of running the gas centrifuges required for uranium enrichment. After that, a further two years would be required to knock up enough to make a bomb. Thereafter, it would have to build a warhead suitable for delivery via missile, giving a total of eight years, according to Mohammed ElBaradei, head of the International Atomic Energy Authority.

The current state of play is this: Iran has told the International Atomic Energy Agency that it has installed 1,312 centrifuges at its Natanz facility, which has capacity for 3,000. As and when it has the full complement, they must be "fitted together to form 18 cascades", after which operatives can introduce gaseous uranium into the centrifuges.

The centrifuges spin at high speed to separate the fissile uranium-235, which must ultimately be enriched to 90 per cent purity if it's to later go bang*.

However, Iran will have to "spin all the centrifuges inside a vacuum without any interruption for a period of about one year", during which time the smallest speck of dust in the works can ruin the whole process, requiring a complete restart. Likewise, mechanical or power failure can send months of work down the pan.

Israel agrees. Prime minister Ehud Olmert said on Sunday: "Iran is far from attaining the technology threshhold and this country is not close to getting it, contrary to statements by its leadership."

If the estimates are correct, it means the US has plenty a time to seek a diplomatic alternative to its sabre-rattling. Gary Samore, vice-president of US think tank the Council on Foreign Relations, offered: "Washington feels it has time to play out the diplomatic hand because Iran is having trouble solving technical problems with its centrifuge machines. The belief in Western intelligence circles is that a large portion of these machines are likely to break if Iran attempts to operate them at high speeds necessary for enrichment." ®

*According to the US's Nuclear Regulatory Commission, the process is as follows:

The gas centrifuge uranium enrichment process uses a large number of rotating cylinders in series and parallel formations. Centrifuge machines are interconnected to form trains and cascades. In this process, UF6 [uranium hexafluoride] gas is placed in a cylinder and rotated at a high speed. This rotation creates a strong centrifugal force so that the heavier gas molecules (containing U-238) move toward the outside of the cylinder and the lighter gas molecules (containing U-235) collect closer to the center. The stream that is slightly enriched in U-235 is withdrawn and fed into the next higher stage, while the slightly depleted stream is recycled back into the next lower stage.

Simple as that. And this is where, Iran hopes, it will soon be centrifuging its way towards a nuclear future - Natanz, as seen on Google Earth: 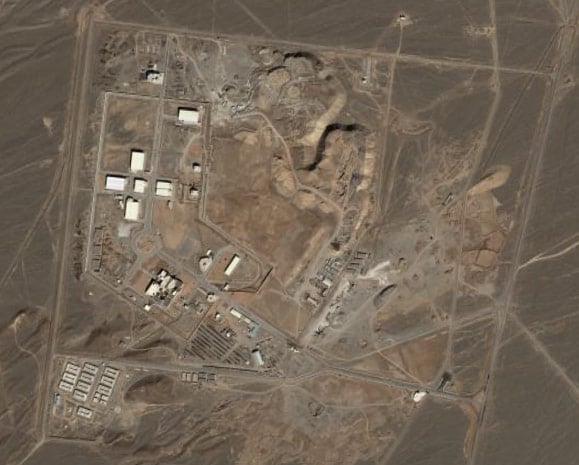