A German consortium has announced its plan to build the world's largest structure - a 578m-high "Giant Pyramid", designed to offer paying customers the chance to "outlast personal physical existence", as the group's website puts it.

The plan is pretty simple: build a big pyramid where anyone willing to stump up about €700 can get a burial spot. The blurb explains:

"The Great Pyramid can potentially be any human being’s grave or memorial site. As monumental as it is affordable, it serves those of all nationalities and religions. Individuals who are either unwilling or unable to have their physical remains buried there can also opt to have a memorial stone placed instead. Stones can be custom designed with any number of colors, images, or relief decorations. The Great Pyramid will continue to grow with every stone placed, eventually forming the largest structure in the history of man." 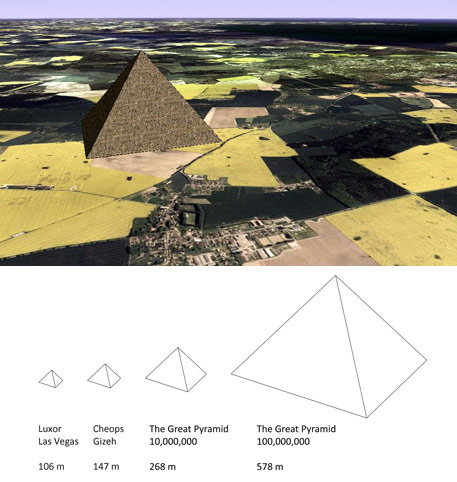 The "Friends of the Pyramid" have already attracted seed money from the "Future of Labor" programme of the government-backed German Federal Cultural Foundation, and on Sunday unveiled a stone prototype of the structure at a "Great Pyramid Festival" in Streetz, north of Dessau.

The Great Pyramid is designed as an organic project, which will grow only as paying customers die and are immortalised in stone. Surprisingly, it has invited "Pritzker-winning" Dutch architect Rem Koolhaas to "lead the jury for choosing a final design for the project". We say surprisingly, because the above pics and the building's name give a few hints as to how the final result may look.

Accordingly, since it will almost certainly end in a lofty point, there are unconfirmed reports that Bill Gates, Steve Ballmer and Larry Ellison are currently engaged in a savage bidding war to determine who will occupy the pyramid's pinnacle in a sarcophagus hewn from gem-encusted silicon and from which lasers project their eternal likeness onto the surface of the moon.