Arms'n'airliners behemoth Boeing has announced that its autonomous robotic stealth chopper, the A160T, will be the initial carrying platform for a new US airborne surveillance payload. The radical new spy system will not be so much an aerial camera as an all-seeing insect-style compound bugeye able to simultaneously look at many different things.

The spy machinery, dubbed ARGUS-IS*, is under development by DARPA** - the Pentagon deathboffin apparat where ideas need to be off walls, outside boxes, and well to the left of any field. ARGUS-IS is supposed to avoid the current "soda straw" effect suffered by existing flying spydroid platforms.

These machines' cameras can typically look at only one location in any detail, like a person peering down a drinking straw, which can mean that unfortunate choices have to be made. It's difficult to put lots of flying robots into the same airspace at once, even if there are enough to watch everything, so increased numbers aren't the answer. 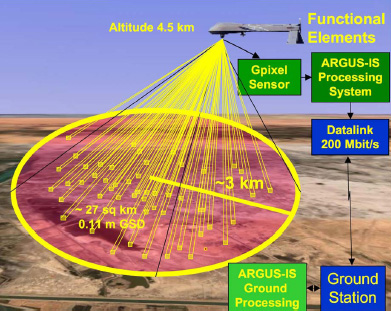 Not just one drinking straw to look down, but dozens.

As DARPA notes in its proposal document (pdf):

"Long-duration, complex operations involving the US military, other government agencies and international partners will be waged... Above all, they will require persistent surveillance and vastly better intelligence... [Existing] high resolution beams can enable observing dismounts entering and leaving a building of interest; however, if a dismount leaves the building, the [robot-handling] surveillance team is forced to decide if they wish to follow him or continue watching the building. If multiple dismounts leave the building, the choice becomes more difficult. This set of undesirable trade-offs is a fundamental result of the sensors not being able to simultaneously observe a wide area at high resolution..."

(A "dismount" is a suspicious weirdo who moves about without the use of a motor conveyance of any kind. This type of deviance is all too common among foreign insurgents and the type of American who must be constantly monitored from on high for the public good. Your beatnik, granola chomping treehugger commie, for instance.)

DARPA figures to solve this by deploying a "Gigapixel" wide-angle sensor which can monitor at least 50 places in full detail simultaneously, perhaps satisfying the needs of many different customers on the ground. Just one ARGUS-IS platform could monitor a whole district of Baghdad for the US military, or simultaneously spy on many different places in an American town for all the various cops, spooks or whoever. Some processing would be carried out in the aircraft, and then the info would be sent down to a ground station for further processing and distribution via a 200Mbit/sec datalink.

Thus far, the only thing lacking in the test programme has been a suitable flying droid to carry the kit; but now a decision has apparently been made. Flight International reports that Boeing has a $6.3m contract to provide an A-160T whisper-mode robochopper for the ARGUS-IS demo phase. The ARGUS-IS flight pod is supposed to be easily fitted to a variety of platforms, so it may be seen on other airframes if it becomes a success.

Still, an unescapable multiplex aerial spyeye package does seem like a suitable load for a silent robot helicopter. ®