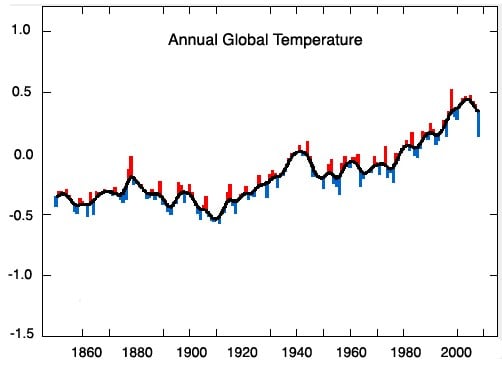 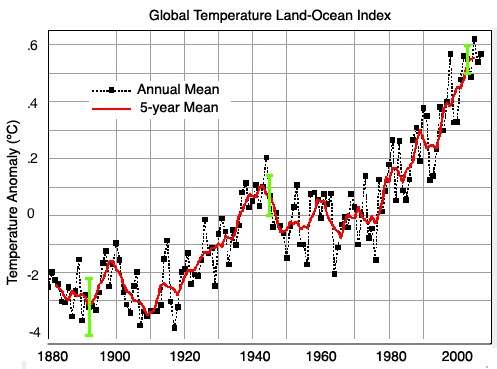 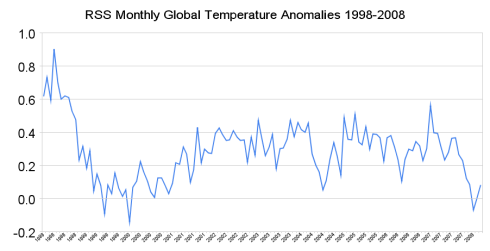 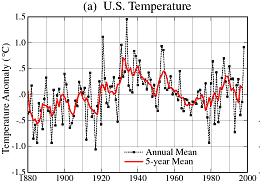 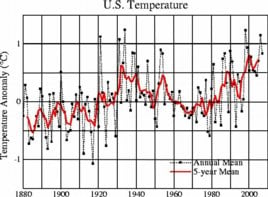 NASA temperatures for March 2008 indicate that it was the third warmest March in history, but satellite data sources RSS and UAH disagree. They show March as the second coldest ever in the southern hemisphere, and barely above average worldwide. (The northern hemisphere in March was split between a cold North America and a very warm Asia, causing temperatures in the northern hemisphere to be above average.) Data so far for April shows both hemispheres back on the decline, and April is shaping up to be an unusually cool month across most of the globe (Africa, South America, North America and portions of Europe and Asia).

Both of the satellite data sources, as well as Had-Crut, show worldwide temperatures falling below the IPCC estimates. Satellite data shows temperatures near or below the 30 year average - but NASA data has somehow managed to stay on track towards climate Armageddon. You can draw your own conclusions, but I see a pattern that is troublesome. In science, as with any other endeavour, it is always a good idea to have some separation between the people generating the data and the people interpreting it.

Some good news moving forward was reported this week by Anthony Watts, who blogs at Watt's Up With That? USHCN has issued a press release indicating that they are upgrading their methodology and ending the practice of adjusting data upwards for future temperature readings. This will make the data more credible, though will not resolve the issues associated with growing urban heat islands or a lack of spatial coverage across the planet.

Bear in mind that warming and cooling concerns are nothing new, as this alarming bulletin reminds us -

The Arctic ocean is warming up, icebergs are growing scarcer and in some places the seals are finding the water too hot, according to a report to the Commerce Department yesterday from Consul Ifft, at Bergen, Norway. Reports from fishermen, seal hunters and explorers, he declared, all point to a radical change in climate conditions and hitherto unheard-of temperatures in the Arctic zone. Exploration expeditions report that scarcely any ice has been met with as far north as 81 degrees 29 minutes. Soundings to a depth of 3,100 meters showed the gulf stream still very warm. Great masses of ice have been replaced by moraines of earth and stones, the report continued, while at many points well known glaciers have entirely disappeared. Very few seals and no white fish are found in the eastern Arctic, while vast shoals of herring and smelts, which have never before ventured so far north, are being encountered in the old seal fishing grounds.

A RealClimate blogger? No, that was the US Weather Bureau in 1922.