Analysis The story is that the world is heating up - fast. Prominent people at NASA warn us that unless we change our carbon producing ways, civilisation as we know it will come to an end. At the same time, there are new scientific studies showing that the earth is in a 20 year long cooling period. Which view is correct? Temperature data should be simple enough to record and analyze. We all know how to read a thermometer - it is not rocket science.

Previously we looked at how US temperature data sets have been adjusted - with more recent versions of historical data sets showing a steeper rise in temperature than they used to. Here, we'll be looking at current NASA data and why their temperature maps appear hot-red, even when others are cool-blue.

To recap the earlier article, the graph below shows additional adjustments to the data set since the big "correction" in 2000. 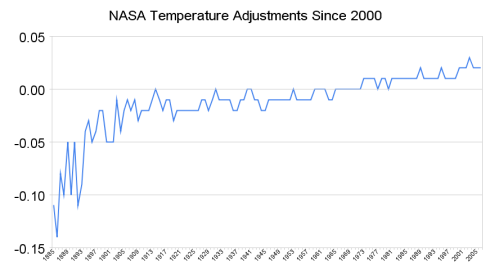 NASA's published data is largely based on data from the US Historical Climatology Network (USHCN), which derives its data from thermometer readings across the country. According to USHCN literature, the raw temperature data is adjusted to compensate for geographical movements in the weather stations, changes in the 24-hour start/end times when the readings are taken, and other factors. USHCN is directly affiliated with the Oak Ridge National Laboratories' Carbon Dioxide Information Analysis Center, an organisation which exists primarily to promote the idea of a link between CO2 and climate.

The map below shows what the raw unadjusted USHCN temperature trends for the US in the 20th century looked like. 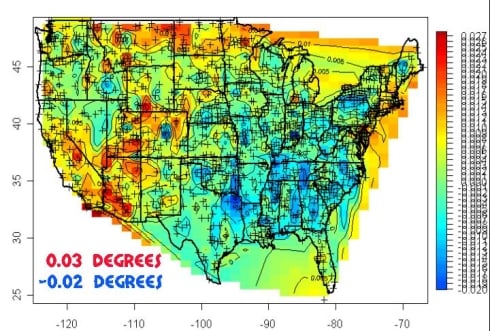 Prior to any adjustments, more than half the US shows declining temperatures over the 20th century - blue and green colors - i.e. the US is cooling down. However, subsequent to the adjustments the country goes dominantly warmer (red and yellow) - as seen in the image below. 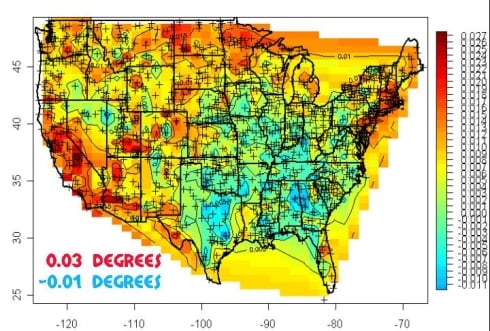 Below is a video showing the USHCN adjustments in action.

So how does NASA's data compare with other temperature sources? As we explained in our earlier article, NASA data is derived from a grid of ground-based thermometers. During the last thirty years, we also have the benefit of more sophisticated technology - satellites which can indirectly record temperatures across most of the planet. The satellite data is from Remote Sensing Systems (RSS) and the University of Alabama at Huntsville (UAH).

In 1998 (left side of the graph below) NASA and the satellite data sources RSS and UAH all agreed quite closely - within one-tenth of a degree. Ten years later - in March 2008 - NASA is reporting temperature anomalies more than 0.5 degrees warmer than UAH. The divergence between NASA and UAH has increased at a rate of 0.13 degrees per decade (red lines below.) In contrast, RSS has converged with UAH over the period and is now within 0.02 degrees (blue lines below.) 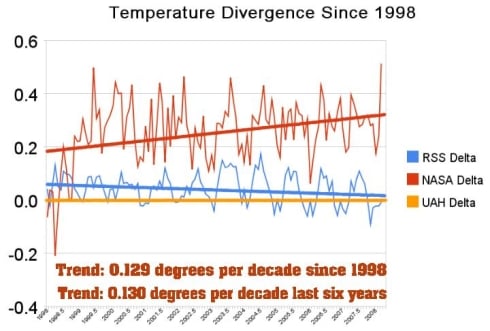 Differences between reported temperature anomalies, NASA, RSS and UAH - with UAH as the baseline.

The divergence is now quite striking. Looking closer at March 2008, NASA's data shows the month as the third warmest on record. In sharp contrast, UAH and RSS satellite data showed March as the second coldest on record in the southern hemisphere, and just barely above average for the whole planet. How could such a large discrepancy occur?

Viewing the NASA 250-mile map for March below, what immediately grabs the attention is that NASA has essentially no data (gray areas) in most of Canada, most of Africa, the Greenland ice sheet, and most of Antarctica. This begs the question, how can one calculate an accurate "global temperature" while lacking any data from large contiguous regions of three continents?

So what was NASA missing? 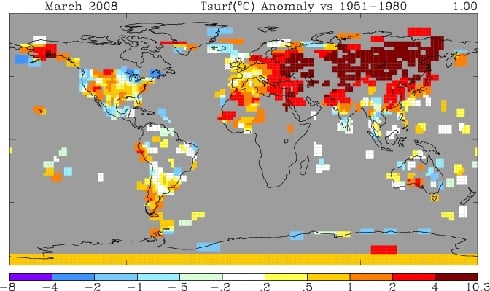 We can find NASA's lost continents in the UAH satellite data for March below. 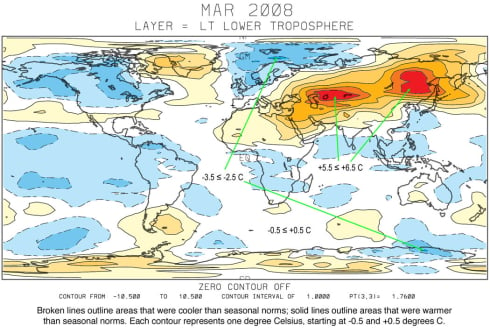 Not surprisingly, the missing areas in Canada and Africa were cold. The NASA data thus becomes disproportionately weighted towards warm areas - particularly in the northern hemisphere. As can be seen in the UAH satellite map above, the warm areas actually made up a relatively small percentage of the planet. The vast majority of the earth had normal temperatures or below. Given that NASA has lost track of a number of large cold regions, it is understandable that their averages are on the high side.

Additionally, NASA reports their global temperature measurements within one one-hundredth of a degree. This is a classic mathematics error, since they have no data from 20 per cent of the earth's land area. The reported precision is much greater than the error bar - a mistake which has caused many a high school student to fail their exams.

A second important issue with NASA's presentation is that they use the time period of 1951-1980 as their choice of baseline. This was a well known cold spell, as can be seen in the 1999 version of the NASA US temperature graph below. 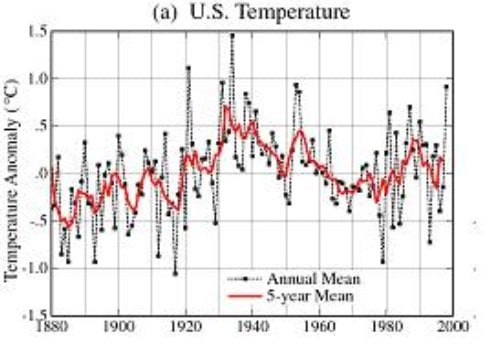 Temperatures dropped enough during that period to trigger concern about the onset of an ice age. Newsweek magazine went so far as to mention a proposed "solution" of spreading soot in the Arctic to melt the polar ice caps. 1978 was the coldest winter on record in much of North America. By using a cold baseline, all recent temperatures become relatively warm - which causes the NASA maps to be covered with lots of hot red and brown colors. From looking at the NASA map above, one could easily believe that that the earth is having a meltdown. By contrast, the UAH map makes most of the earth look quite cool.

When we look at the temperature data for Alaska, the disparity is again quite striking.

The NASA temperature map for March above shows Alaska temperatures much above "normal", while the UAH map shows Alaska temperatures well below "normal". This is partially due to the fact that the 1951-1980 NASA baseline period was unusually cold in Alaska - due to the cold phase of a dominant ocean cycle, the Pacific Decadal Oscillation (PDO), as shown below. The graph below indicates variations in Pacific temperatures, showing a cold period from 1950-1980 which exactly matches NASA's baseline period. 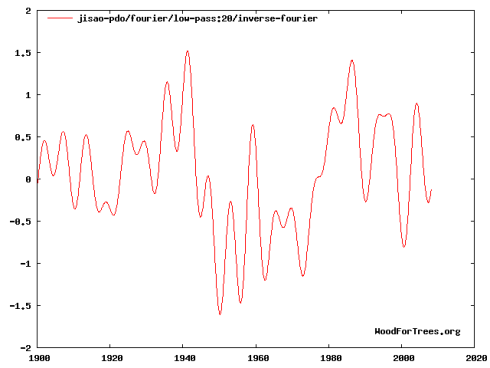 When the PDO ocean pattern is in its cold cycle, the Pacific remains dominantly in the La Nina phase, causing cold temperatures - particularly around the Pacific basin. La Nina also causes cold northern hemisphere winter temperatures across much of the world - as measured in 2008. 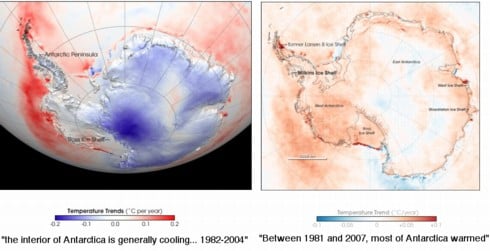 We can see how dramatic an artistic makeover can be. On the left, NASA's Goddard Space Flight Center shows that "the interior of Antarctica is generally cooling". Indeed, most of the landmass is cooler, or the same as it was, with patches of warming around the periphery.

On the right, NASA's Earth Observatory warns that "Between 1981 and 2007, most of Antarctica warmed" - and the graph is correspondingly crimson. For the colourists at the Earth Observatory, a mere +0.01C is needed to colour the continent red.

One month does not make a temperature trend, and the point of this article is not to ascertain whether or not the earth is warming towards Armageddon. We are not qualified to analyze that or second-guess the experts. What is being examined is the quality and stability of the data being used by people making those claims.

For example, whatever motivations NASA had for picking the 1951-1980 baseline undoubtedly have some valid scientific basis. Yet, when the data is calibrated in lockstep with a very high-profile and public political philosophy, we should at least be willing to ask some hard questions. Dr. James Hansen at GISS is the person in charge of the NASA temperature data. He is also the world's leading advocate of the idea of catastrophic global warming, and is Al Gore's primary climate advisor. The discrepancies between NASA and other data sources can't help but make us consider Einstein's advice:

"If the facts don't fit the theory, change the facts." ®

Credits Thanks to Evan Jones from Watts Up With That for pointing me to the USHCN temperature maps, and Steve McIntyre for generating them.