OpenOffice 3.0 - the only option for masochistic Linux users

Review In a brilliant execution of public relations, OpenOffice.org 3.0 was released without enough capacity to handle the demand for downloads. Servers buckled under the traffic, and some of us in the media took the bait: Shit, this thing must be hot. Are people really getting that excited over an open source productivity suite?

Before we knew it, we were knee deep in 150MB of download.

Installation is Half the Battle

OpenOffice is really the only option for Linux users who don't understand the hype behind web-based office software like Google Docs. We've been battle-hardened when it comes to software installations: RPM, Debian packages, tarballs with shell scripts, and - when we're up for some chest thumping - source code. So it comes as no surprise that installing OpenOffice 3 on Linux can be a pain in the balls.

Specific Debian packages haven't hit the Ubuntu repositories yet, so we had to do the install by hand. Visiting the OpenOffice install page prompts a file download. Unfortunately, as an Ubuntu user, you'll get the RPM version, which makes things a little tricky considering Ubuntu doesn't, you know, use RPM. A little searching on the OpenOffice website yields paydirt: Debian packages.

If being a Linux user means that you're left to figure a lot of things out on your own, being a Linux user on a 64-bit platform makes you the Henry David Thoreau of technology. Just to make things extra spicy, the Debian packages provided are for the i386 platform, which - try as it might - will never be the amd64 platform. As such, the provided installation shell script falls flat on its face. But using the iron fist of root, you can install the Debian packages by hand:

Yeah, that's what I thought. Shut your face.

Since this isn't an Ubuntu package, it doesn't have Ubuntu integrations. OpenOffice 3.0 is nowhere to be found in your 'Applications' menu, but you can find the binaries in /opt via the command line. If you use RedHat or some other derelict distribution, the install might be cleaner.

One of the gripes about OpenOffice is that it doesn't feel as crisp as Microsoft Office. The interface and the icons were likely designed by somebody who writes code for a living, not somebody who designs interfaces and icons for a living. 3.0 is a step in the right direction here, with much more inviting icons. For example, the slide type menu in Impress 2.4:

Though the UI isn't yet perfect, you'll find small improvements like this littered about OpenOffice 3.0. However, there was one area that will cause a bit of confusion if you're used to the way things ought to be. Version 3.0's Save menu makes file system navigation tedious: 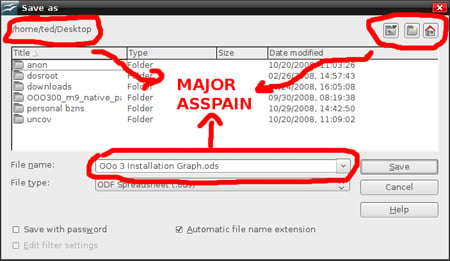 OpenOffice Save menu (with commentary)

I'm glad that OpenOffice decided to dump GNOME's default save-as menu for their own harder-to-use menu. I was getting bored of being able to intuitively save files wherever I wanted.

The Calc spreadsheet charts still kind of look like ass

Since aesthetics clearly isn't a strong suit here, it's no surprise that charts made by the Calc spreadsheet still kind of look like ass. Having done many an investor pitch, I can say categorically not only does your graph have to go up and to the right, it also has to look polished. Calc 3.0's charts and Calc 2.4's charts are equally uncompelling. 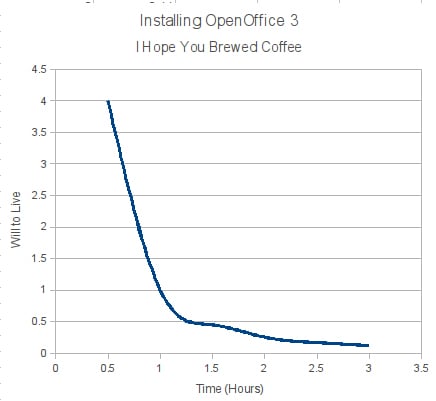 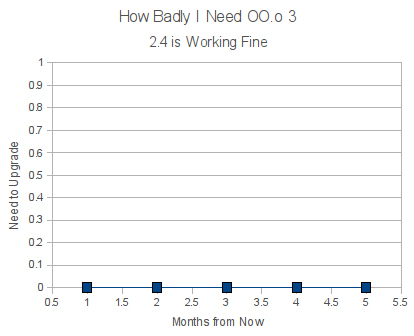 Yeah, this hasn't changed much. Something tells me that open source engineers - having forsaken all worldly possessions in order to pursue a life of self-sacrifice - never had to try and convince rich people to give them money.

The Feasible Region in my Loins

Shinyness aside, OpenOffice 3 does have at least one useful new feature: The Solver. The Solver is a new tool for Calc that helps you solve linear programming problems. Excel has had this for years, so it's nice to see the open source world throw their nuts out on the table. Mac users should feel especially gifted: Not only do they now have a version of OpenOffice that can run without X11, but they finally have a spreadsheet that can do linear optimization. Microsoft Office 2008 doesn't provide this for Mac users.

Linear programming is a way to optimize an equation given a bunch of constraints. You have limited capital resources and want to maximize your profit - that sort of thing. Previously, Linux users have been using the GNU Linear Programming Kit (GLPK) to solve these problems. GLPK works well, but it's a command line interface and you need to learn a special programming language to use it.

Doing optimization in a spreadsheet is much easier on the sanity than doing it in a special programming language. In ten minutes, I set up and solved a basic linear programming problem:

My woodcarving company can make toy soldiers and toy trains. Each has an associated materials cost and labor cost. Each takes a certain amount of time in both finishing and carpentry. How many soldiers and trains do I make so that I earn the most profit?

Put the variables into Calc and write the constraints into the Solver: 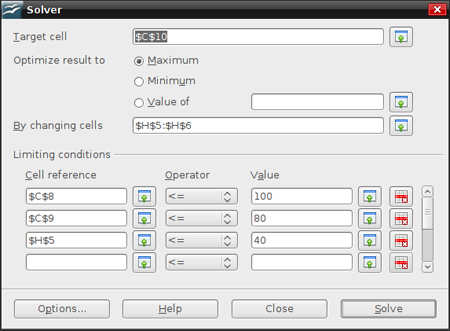 It will figure out how many of each to make, and fill in the spreadsheet:

With so many “financial engineers” entering the job market now, it's likely that many of them will find work in operations research. Perhaps OpenOffice's Solver will get more intense use than what a Reg reporter who took that class in college can do.

OpenOffice 3.0 has some good new functionality, but it hasn't changed substantially from version 2. And it's not worth the effort to manually upgrade on Linux: Wait until it hits your distribution's auto-update.

In any case, it's easy to download now. The open source echo chamber has moved on to other things. ®

Ted Dziuba is a co-founder at Milo.com You can read his regular Reg column, Fail and You, every other Monday.