New Media: It's in your ear

Here's a conundrum. Top Media People want to come out of the shadows and get "closer to their listeners" - it's what the Web 2.0 people urge them to do. BBC people in particular are obsessed with being seen to be bossy or "out-of-touch" - especially since three out of four license payers have a gripe with the corporation.

But the more of themselves media people reveal, the more the public sees them as clueless, self-referential and narcissistic bunch so many of them are. And the more time the BBC spends on peripheral New Media wankery, the more people wonder why they're paying a license fee. You'd need a heart of silicon not to enjoy their agony. The poor souls.

At Monday's "Radio At The Edge" forum at Westminster a panel of three: presenter Iain Lee, a Nathan Barley-type from Channel 4 called Dan Heft, and the BBC's website's tech blogger Rory Cellan Jones - better known as 'Uncle Bryn' in the hit comedy show Gavin and Stacey - all came to praise the glory of Twittering, Googling 24x7, and user generated content.

The audience was packed with BBC New Media types - kung fu masters of JavaScript, and people who can say "social media" without blushing. So it all promised to be a swoon - with ritual noises of self-abasement from the broadcasters.

But what spoiled this was the panel's chair, Fi Glover, who could barely contain her sarcasm or her scorn for the "Emperor's New Clothes", as she called it a few times.

Uncle Bryn took to the stage and spent the first minute taking pictures of the other panelists - and the audience - using his Blackberry. Asked what he was doing, he said he was trying to Twitter live that he was Twittering live from a panel about Twitter.

Over to Dan Heft, who reminded us that "you leave a trail of digital content out there", but Bryn's own trail had come to a halt - he couldn't get his Twitter feed to work.

"I haven't done any work - I've been blogging," Bryn admitted, adding that he'd been "doing a helluva lot of Twittering". This wasn't always popular with colleagues, who were trying to navigate the toxic debts of the credit crunch. 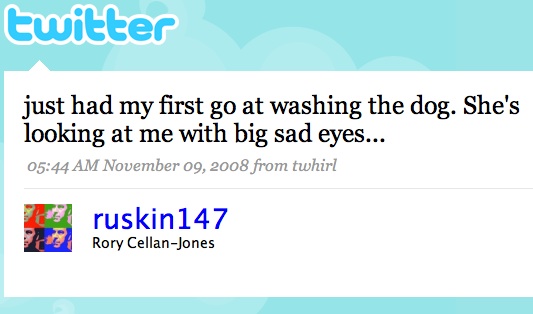 Your license fee at work

Asked whether this actually helped with his work, Bryn replied that Tweeting helped him reach "a small but important part of the community".

But is this true? The average age of Twitter users is 38, and most work in new media or advertising. In reality, he was talking to very like minded members of the same cult. He loved it, though:

"I actually have to stop myself Twittering!" Sadly, however, he said this caused strife at home:

"Journalism has become 24x7," explaining that all this blogging and Twittering ate into his weekends. "Yes it's time consuming - family life can suffer."

As you can see by the selection of Twitters.

Iain Lee seemed to have a good grasp of what technology was useful for - and didn't seemed obsessed with it at all. But for Dan Heft, there didn't seem to be a problem out there that couldn't be solved by the Webtastic magic of the New Media Revolution.

For example, he said, the BBC could have handled the Ross/Brand episode much better. If the BBC had "been monitoring [web] content in a more pro-active way they'd have seen the trouble before the Daily Mail," he reckoned. I'm not sure about that. Actually listening to the program - which we now know was "independently" produced by Brand's agent's production company - might have been a better idea. But to a Web 2.0 person, the answer to every question is more Web 2.0. 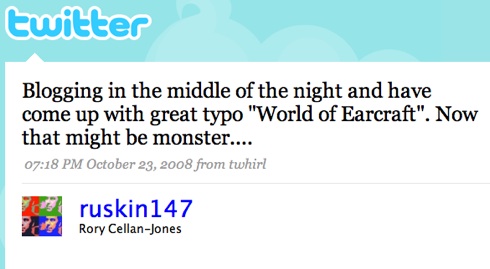 Fi Glover had the perfect description of this interactivity mania:

"Doing what we believe to be good is surely the way to go?" she wondered. Radio 4's Saturday Live show had begged for listeners to contact them, which she nicely characterised as "Text us! Email us! Love us! Love us!"

But when the presenters stopped begging for feedback - far more people actually got in touch.

What listeners had no interest in was blogging the running orders and scripts. Revealing the "process" of journalism is not an adequate substitute for good journalism.

Rory was actually more subtle than you'd ever think from reading his Twitterage. He mentioned some pitfalls, such as the danger of bowing to single issue fanatics. He said he was hounded by two groups: 9/11 fanatics and "people who use the Linux operating system" (he'll get mail). But not one of the biggest dangers - that all the Twitterers think alike.

(As an example, search the recent week's Twitterage for discussion of The Long Tail - an article of faith amongst the Twitterers. It exploded last week - but you'd never know that from Twitter. When the media types look to each other's ignorance for support, ignorance is all that's reflected back).

The new editor of Newsnight seems obsessed by Web 2.0, though. Evidentally a process guy, he lauds putting the processes on display and fawns over the "collective intelligence" of the audience - the equivalent of putting on a fake Northern accent to interview Northerners.

The result is fully groupthink compliant.®